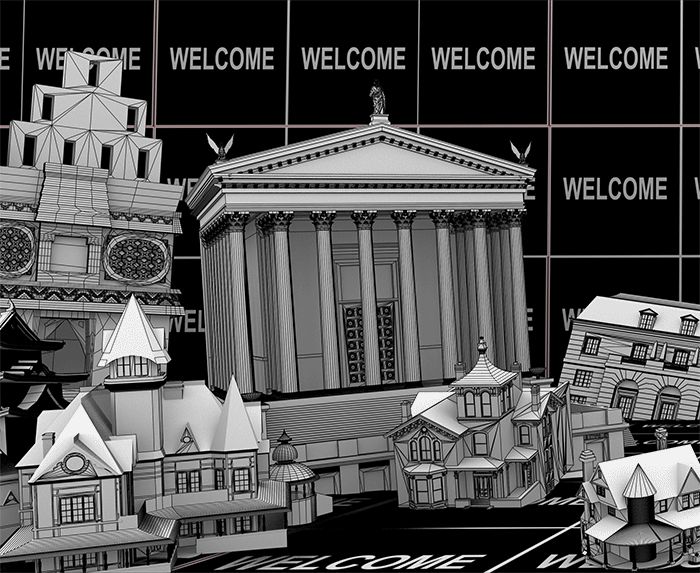 Claudia Hart presents The Dolls House at Transfer Gallery in New York. For her first solo exhibition with the gallery, Hart brings together a collection of works, which combine sculptural and video elements that mould mathematical patterns into physical forms. Her physically embodied digital world is a present-day imagining of a future history. The work explores time, and the idea that history is an endlessly repeating cycle in the constant process of rewriting itself.

To build her future history, the artist has brought together components which hark back to historical periods of empire. Hart brings together 3D models from Google’s 3D warehouse and transforms them into dolls houses, placing them in a digitally rendered setting. Accompanying the dollhouses are animated works replicating the patterns of banners from the Mongol Empire and of Faberge eggs.

Also among the works are 3D printed tutus, which like the monuments are derived from a recording of a moment in history. The form of the dress is repeated throughout the exhibition and is inspired by the one worn by the Spanish princess Margaret Teresa, who was painted by Velazquez. The exhibition is an extension of Hart’s 2015 media ballet, The Dolls, which is accompanied by a soundtrack by her collaborator, Kurt Hentschlager.

Through the exhibition Hart continues her combined practice and research, which looks to create new worlds which inject elements of femininity into digital modes of presentation. She challenges binary or dialectical structures by colliding recognisable elements together in new environments and combinations.

The Dolls House opens at Transfer Gallery, 1030 Metropolitan Avenue, Brooklyn NY 11211 from 23 April to 4 June 2016. Read a review of the exhibition via The Creators Project.