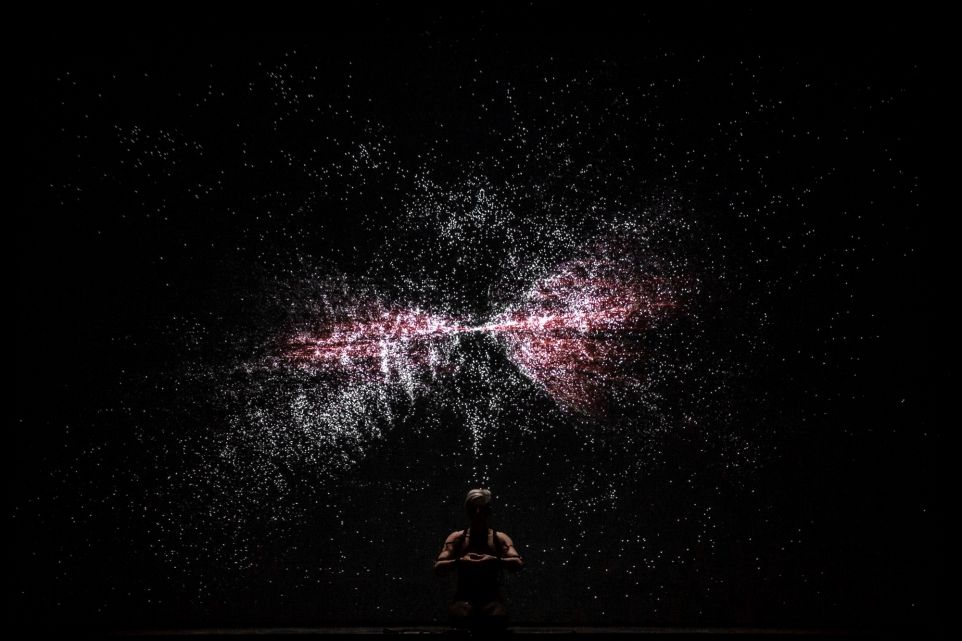 On 3 May fuse* will present the North American premiere of their interactive audiovisual installation work Dökk at MUTEK San Francisco. The Italian art studio are also launching a new collection of works on Sedition in early May, the third and final instalment of the Evolutionary Cosmos project. We spoke to the studio about the live performance and digital editions; read the interview, and more information on fuse* at MUTEK, below.

Originally shown in 2017, Dökk is a visual opera developed over three years with the intention of creating a deep empathic connection between performer, audience and digital landscape. The word Dökk is Icelandic for darkness; the artwork developed by fuse* explores darkness as a threshold between life and non-life, perceptual reality and realities that exist but are beyond our reach:

“In some cultures, the absence of light may be interpreted as a metaphor for life on Earth and of the perception of reality represented as a shadow cast by a light that cannot be seen yet the existence of which may only be sensed.” - fuse* 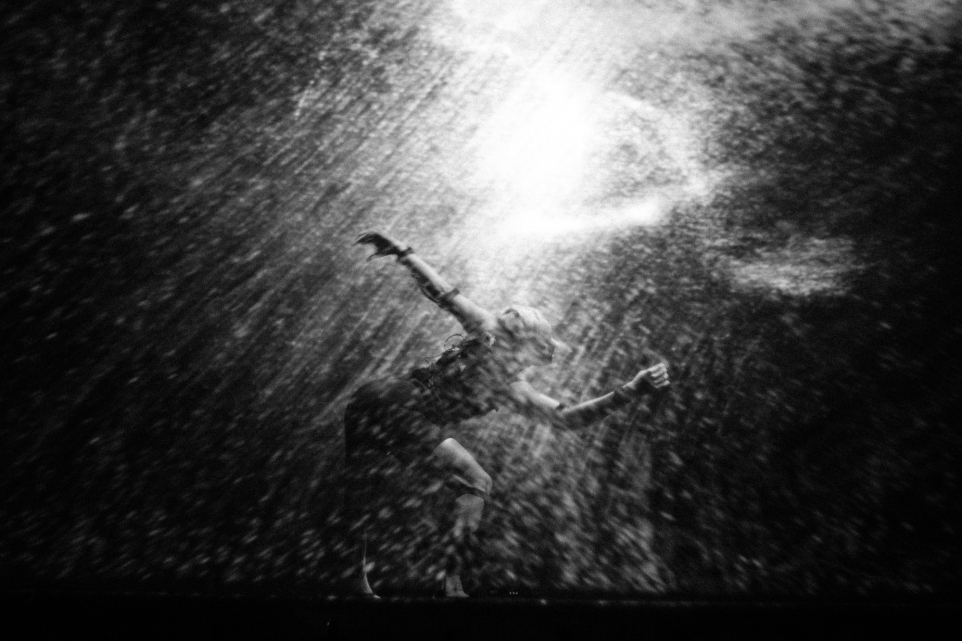 The installation combines a double-fronted projection onto a holographic screen, rear projections onto the stage, live dance, and the real-time analysis of data from a range of sources: from the performer’s heartbeat, from the sound generated during the performance, and from analysis of sentimental words filtered from a live Twitter feed. This combination of pre-determined and spontaneous inputs creates new zones of intimacy; the body of the dancer, or the emotional responses of social networks to world events, influence the interplay of digital elements generated by code.

Dökk is presented as part of A/Visions 2, which takes place at San Francisco’s Herbst Theatre from 6pm to 9pm on 3 May. The evening event features a performance by electro outfit Dopplereffekt and A/V artist de/Rastra and an immersive A/V performance by Warp Records pianist Kelly Moran, as well as the premiere of Dökk. 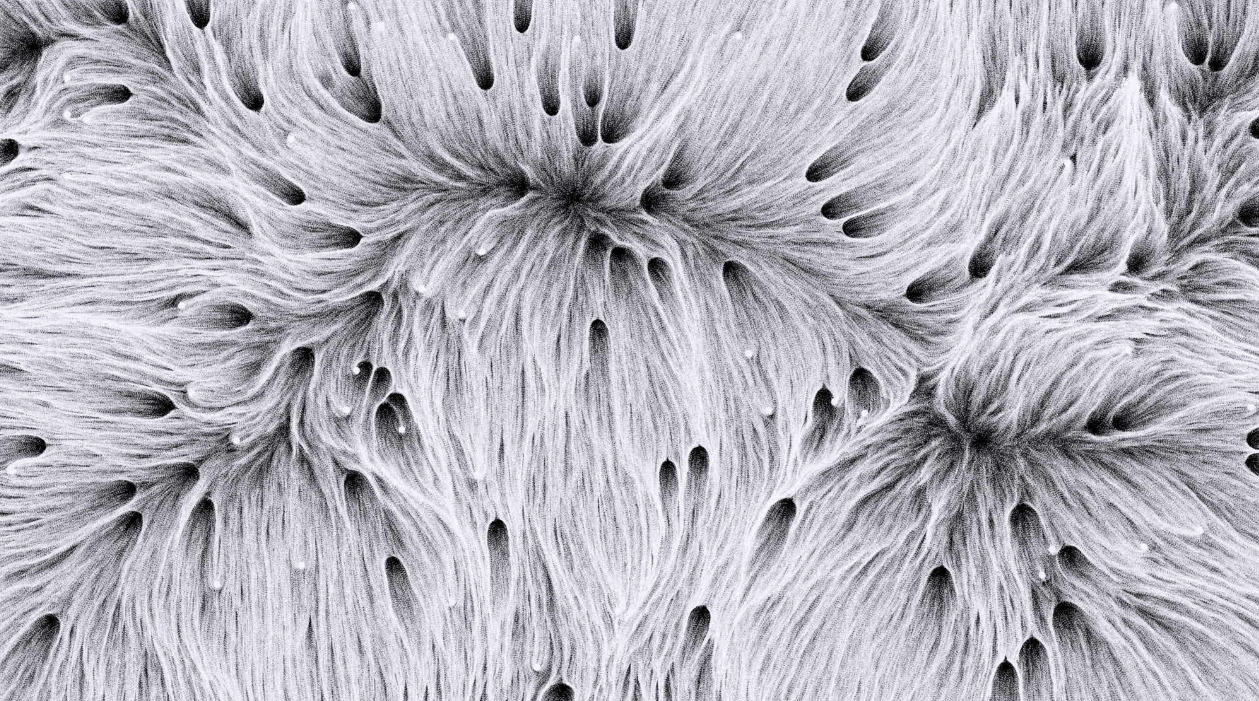 Black and White Holes by fuse* available on Sedition

On 2 May fuse* launch the third and final series of works in their Evolutionary Cosmos series. Evolutionary Cosmos III presents the final three of nine works in the series, which is derived from the 2018 A/V performance Multiverse. Multiverse explores Leo Smolin’s multiverse theory that our universe is only one of an infinite number of coexisting universes. The nine works in the collection explore the dynamics of the multiverse, visualising and sonifying formation and disintegration, order and chaos. Particle interactions are simulated by an evolving digital environment, meaning that the work is capable of generating an infinite number of dynamic variations of unfolding universes.

We spoke to fuse* this week to learn more about the creative thinking behind Dökk and Multiverse, and about their plans for future projects.

You say on the Multiverse project webpage that the ‘creator’ of Multiverse is the software. What have you learned from Multiverse about software as a creative force?

Our creative approach involves a profound interaction with the mathematical and programming elements responsible for the final result. The software, written and developed specifically for that specific process, becomes itself part of the final work. What probably distinguishes our creative process is the mutual influence that is established between the artist and machine during a bumpy journey during which we often only know the main direction while the precise path is more clearly outlined over time even thanks to limitations and new possibilities that are discovered by writing the software itself.

There are also different levels through which the program can modify the result that we then see and hear. In this sense, we can say that the role of "creator" can be shared with the machine as it is performing actions that modify the content based on rules defined by the programmer but which do not allow us to predict the final result in a deterministic way. We, therefore, try to work within a predefined boundary, hoping that a certain type of instructions will produce unexpected behaviors that will surprise us and therefore generate wonder.

Similarly, with Dökk, what did you discover about the empathy of algorithms? Can software be said to have empathy?

It is obviously extremely difficult to define whether and how software can express emotions or share what are human emotional states. Personally, I think we are still a few steps away from a machine capable of sharing emotions as we commonly understand them in our species. If works of a certain type, restricting us to the field of digital art, are able to provoke and excite I think that it is thanks to the people who have thought about it, elaborated it and finally built not so much of the specific tools that they have used. It is not the means that ultimately define the ability to strike people but the quality and depth of the story that they have been able to create.

Did any lessons or elements from Dökk influence the development of Multiverse? Do you see the two works as connected, if so, how?

The connection between the two works and in general a common element in all that is produced in our studio is the idea of ​​trying to create a close relationship between the artworks and the people who will enter into a relationship with it. When designing an installation or a performance we always try to think in terms of human experience by putting the person at the center of the creative process. Everything happens according to the type of emotion we want to convey and the story we want to share. Both in Dökk and in Multiverse we tried to convey an idea of ​​a connection between humanity and all that exists (the universe) with the aim of working on universal communication channels that carry a message of union and sharing.

Do you have any burning questions you’d like to address in your next long term project?

Could you tell us what you are working on next? What should digital art lovers look out for from fuse* in 2019/20

Right now we are exploring different themes and technologies and, like many artists working with emerging technologies, we are experimenting with some techniques based on AI. We believe that there are great expressive potentials that can arise from the use of artificial intelligence in the artistic realm, but we are probably only at the beginning of this exploration and we still have to find ways to use these technologies to create something that has a profound meaning.

In 2019/2020 we plan to build a new installation and start the production of a new live media opera that will probably be presented in 2021.