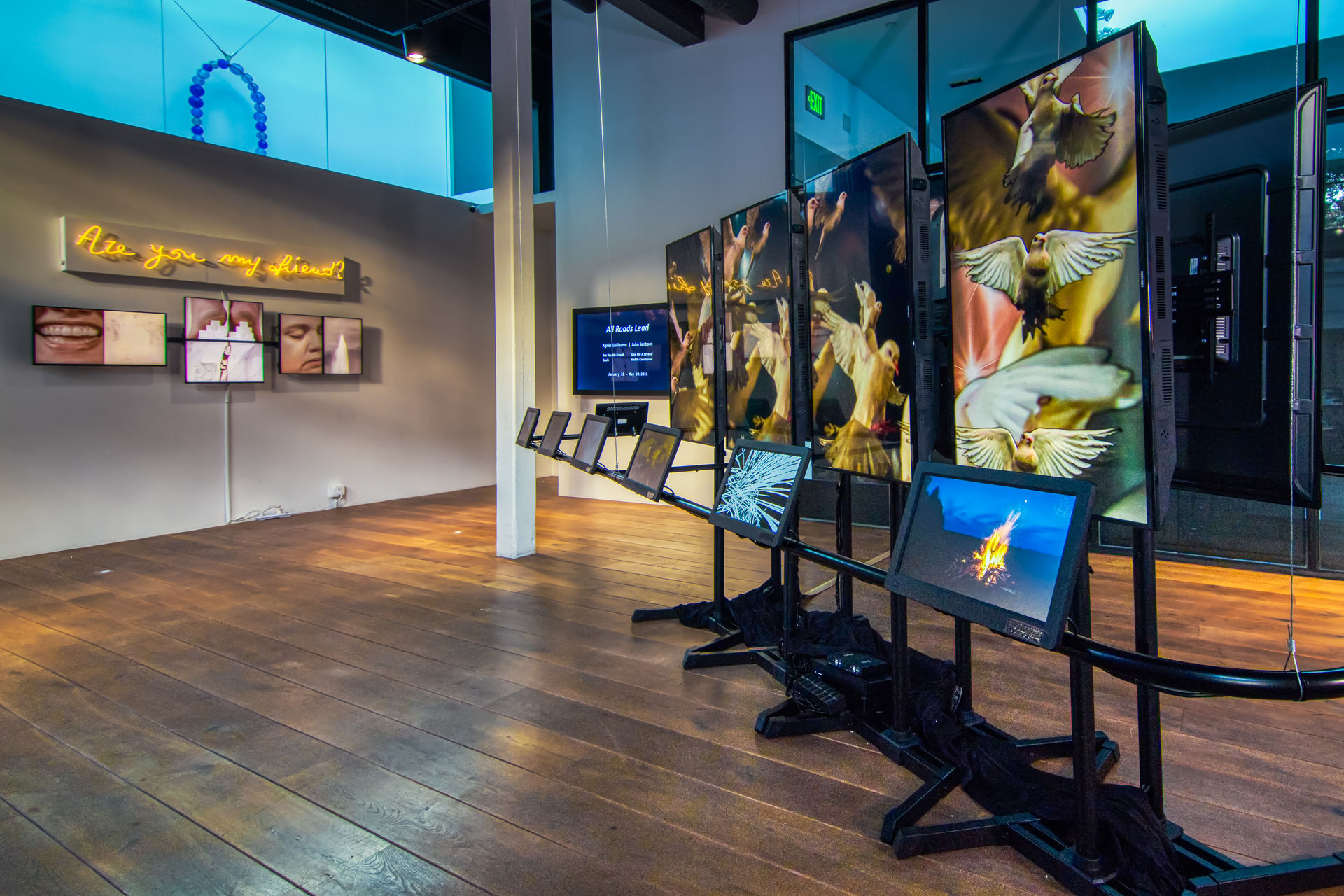 John Sanborn and Agnès Guillaume present All Roads Lead, a joint exhibition at 836M in San Francisco. The exhibition is the result of a long-awaited collaboration between the two artists, and is also the first video art exhibition ever shown at 836M.

The two artists are friends, having met in Paris where both were exhibiting work which looked at Adam and Eve. Despite this, and despite both working with video, in general the styles of the two practitioners are starkly different; Guillaume tends towards the minimal, seeking to convey complex meaning with a single mark or thought, which Sanborn creates intricate, complex, multi-channel works, “preferring a pop culture lexicon that seeks to mash, mangle and transpose” (836M). Both artists work with sound in compelling, and very different, ways.

For All Roads Lead, Sanborn and Guillaume joyfully examine the differences and connections between their works while also exploring a range of broader topics. Each artist presents two works; each work by Guillaume is paired with a work by Sanborn, creating powerful dialogues between the pairs. Through these works both artists ask what it means to be human. 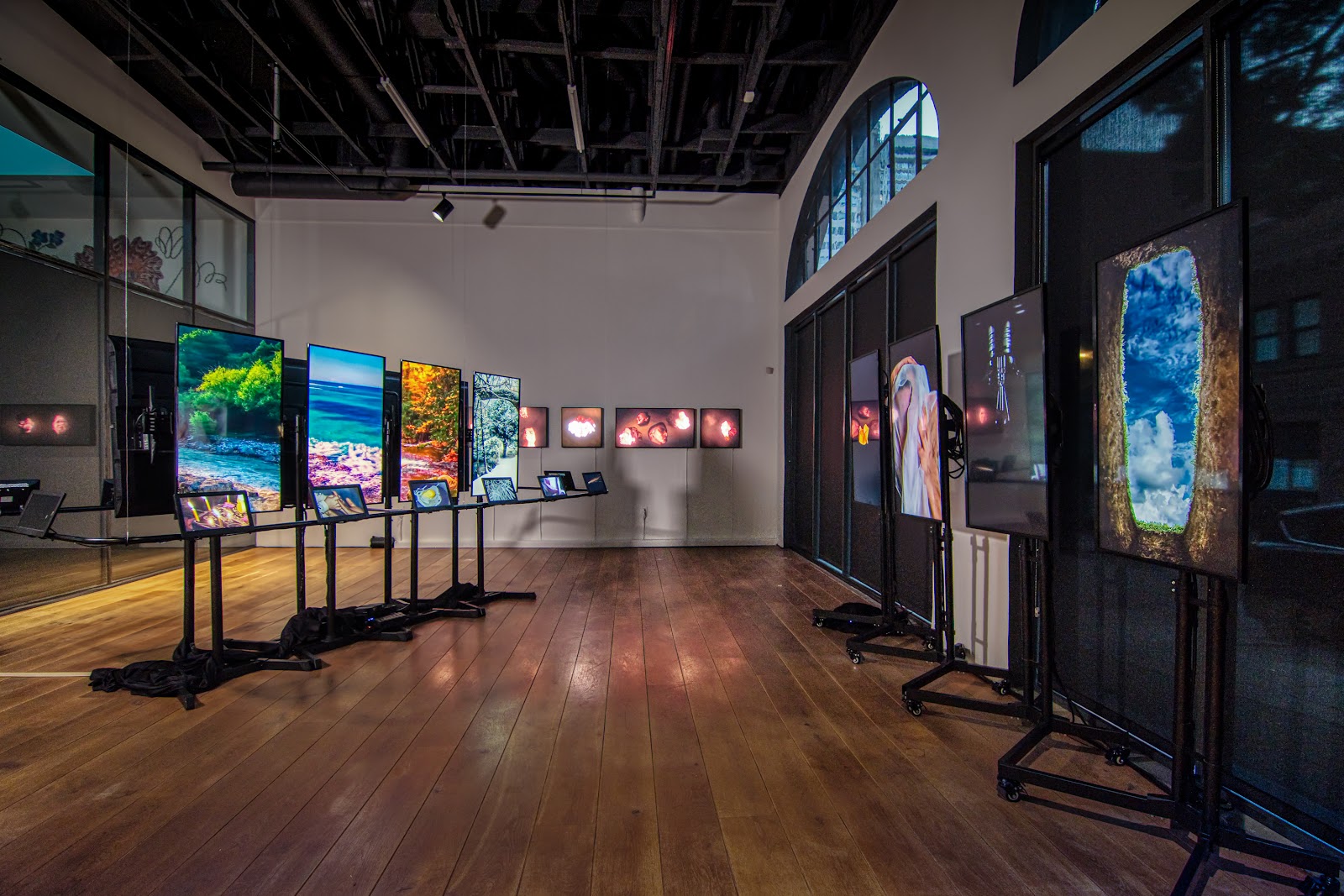 The first pair, Sanborn’s Give Me A Second and Guillaume’s Are You My Friend, revolve around questions of friendship, dedication and obsession, and our relative transience and insignificance. Guillaume’s work presents three diptych scenes showing a marble quarry, a vortex and a water jet, whose arrangement prompts questions about the relationship between humans and natural resources; our treatment of nature, and our own permanence, come under the spotlight. Sanborn’s work, arranged across four screens, explores ‘the comedy of death’; oblivion as something shadowy and frightening, but also mundane, farcical, obscene. 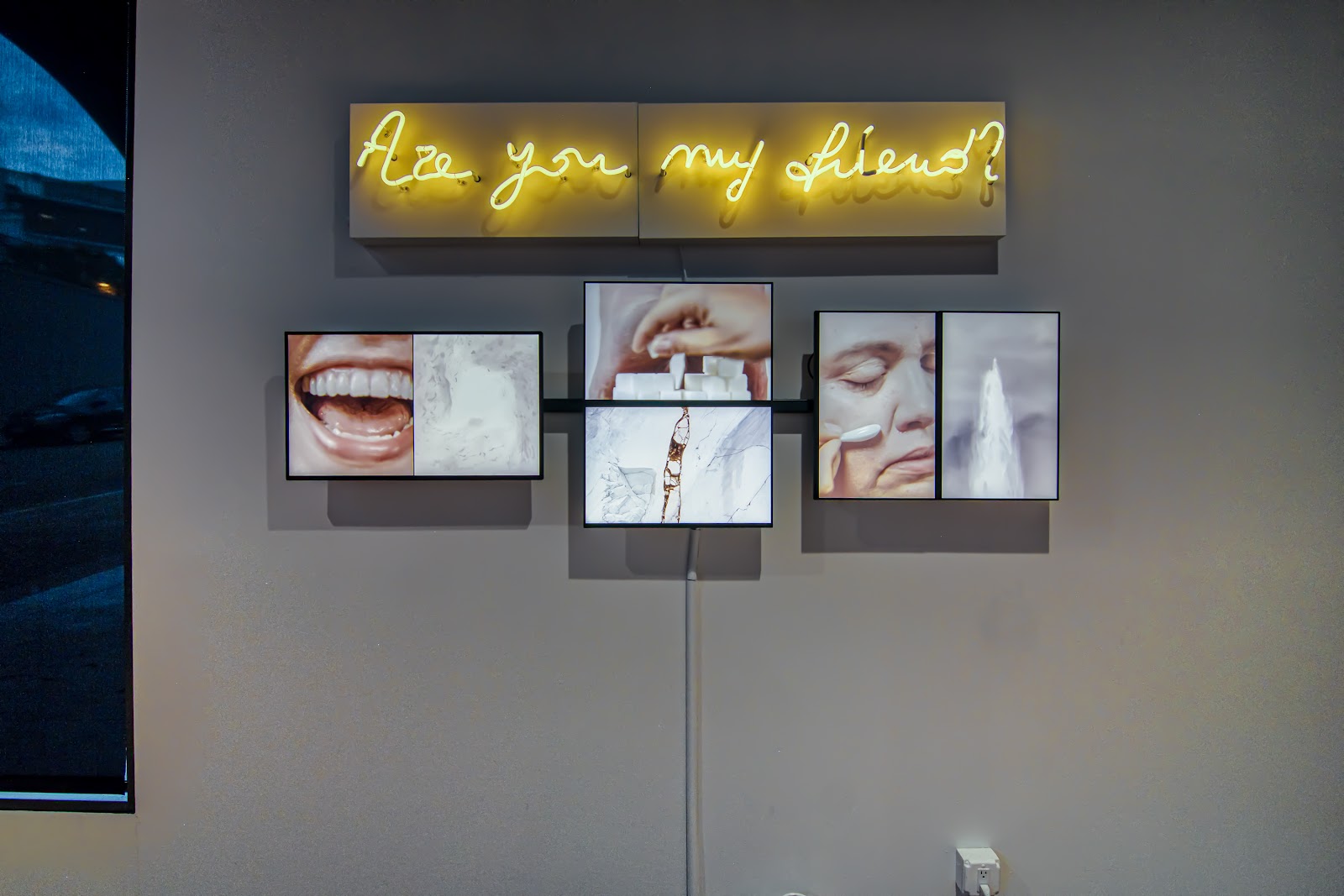 Are You My Friend by Agnès Guillaume. Photographer: Roger Jones.

And In Conclusion by Sanborn focuses on climate change and looks at different lifecycles that coexist on Earth; their durations, their mutual compatibility or otherwise. The work is shown across eight freestanding screens arranged into two groups of four, with fourteen smaller screens in a suspended circle around the outside displaying markers of time. Visitors are invited to wander through this complex arrangement, taking in single vignettes as well as a wider sense of chaos. ‘“The viewer,” notes Sanborn, “must complete a continuous circuit in order to view the work, yet will never fully complete the circle. We’re all here by a quirk of nature, and not forever. Entropy will always win.” - 836M. 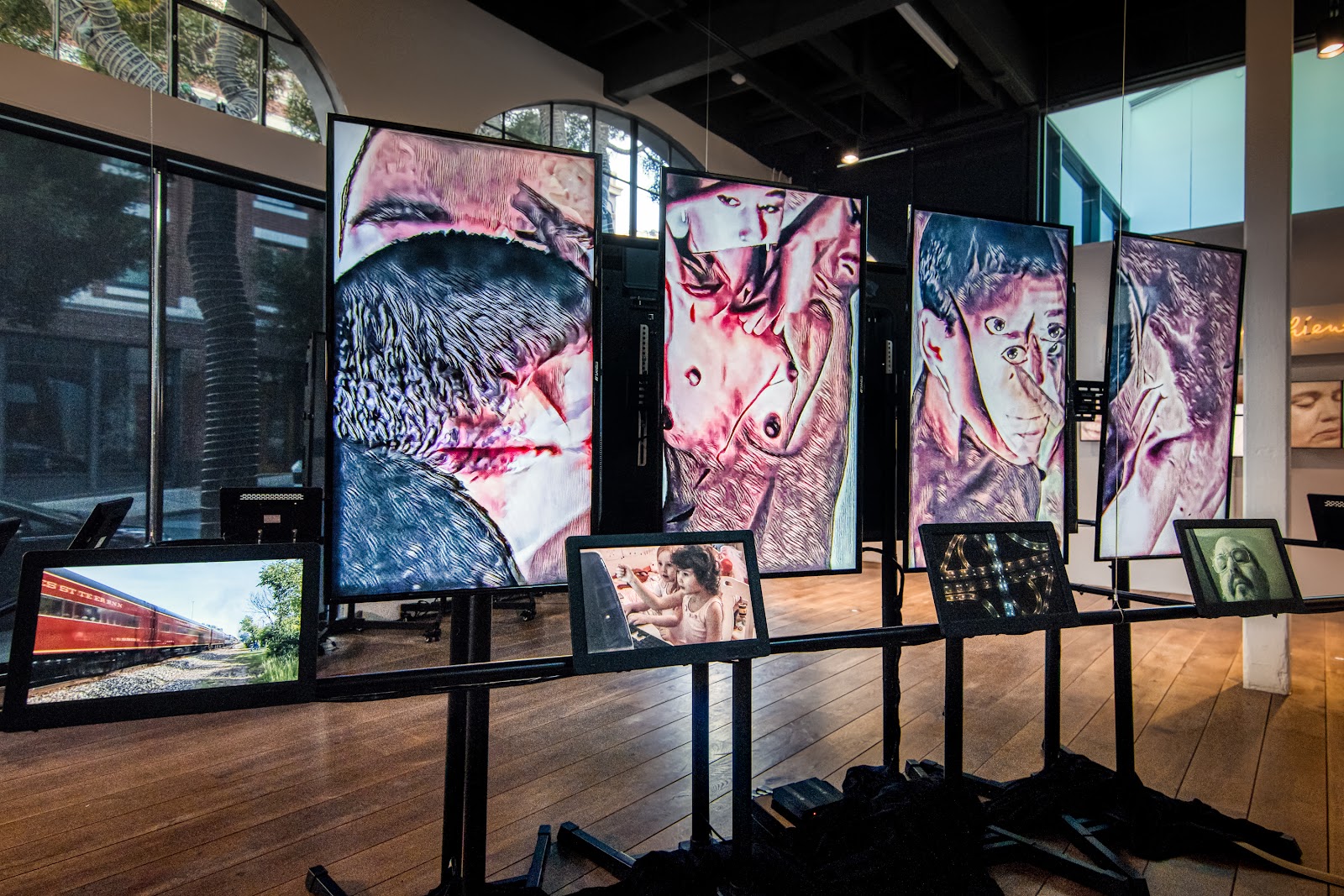 Side A of And In Conclusion by John Sanborn. Photographer: Roger Jones. 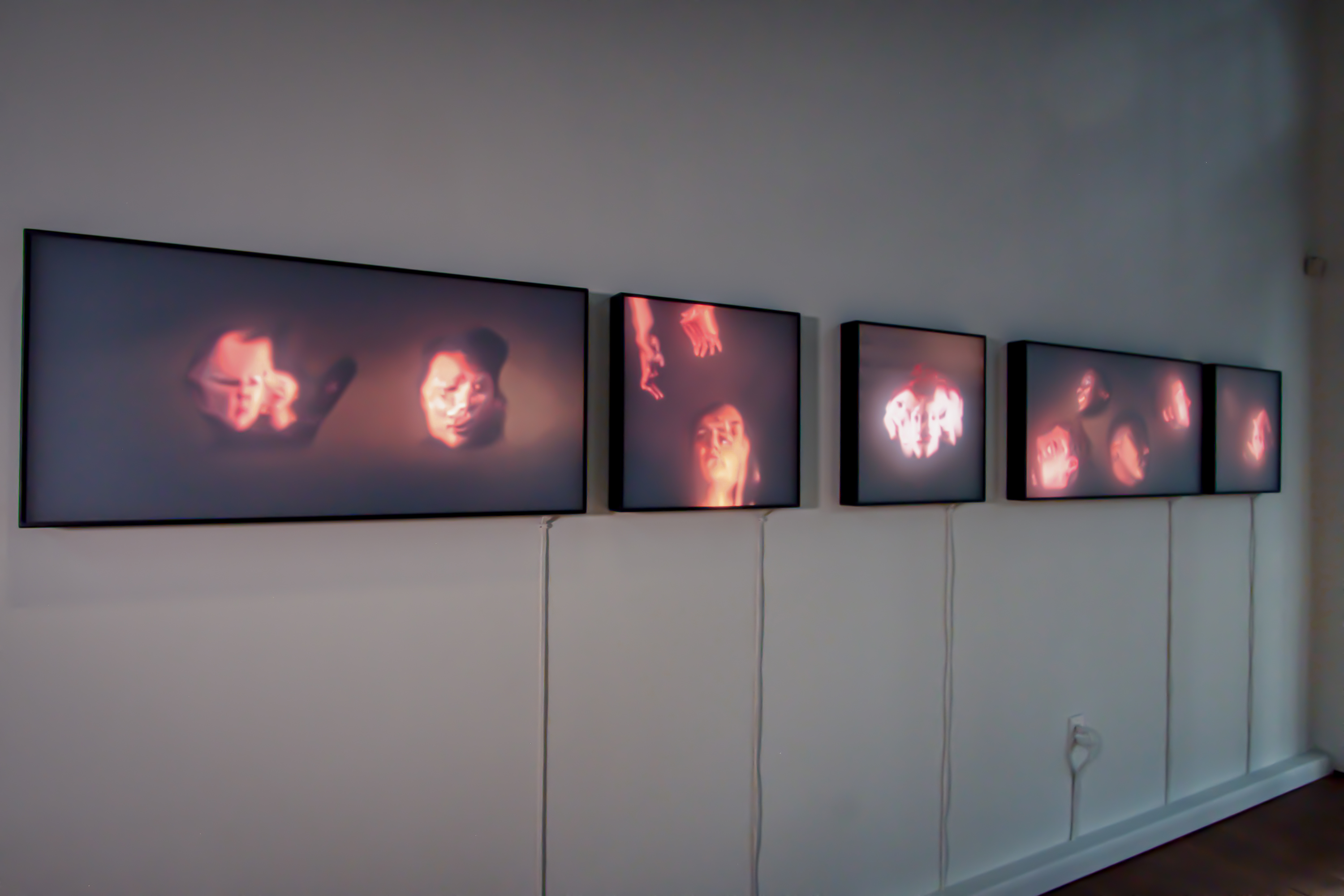 Alongside And In Conclusion is Guillaume’s work Souls. This piece presents portraits of unknown, inscrutable people moving against a monochrome background. The almost-subjects are familiar yet anonymous; they give small clues to the depth of their characters while also blending into the rhythm of the whole. This piece is a comment on video art as a medium which captures the chaos and boundless complexity of life; themes, faces or happenings come to the surface, but only give brief glimpses of themselves. “This project is by its essence a video work,” says Guillaume, “as in a single glance we feel the essences of human beings dissolve and coalesce, their faces revealing who they are by virtue of how they constantly appear and disappear.” - Agnès Guillaume, 836M.

The exhibition is open to private showings by appointment in compliance with COVID-19 guidelines.

Top image: Side B of And In Conclusion by John Sanborn (R) and Are You My Friend by Agnès Guillaume (L). Photographer: Roger Jones.