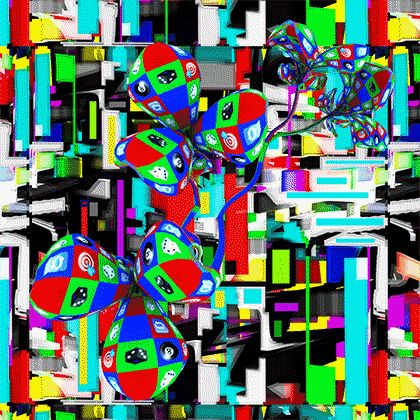 A new configuration of

Claudia Hart ’s Flower Matrix has returned to TRANSFER Gallery with an off-site installation at Gallery 151 in Chelsea, New York.

The Flower Matrix is an extensive project which incorporates multiple formats and media including VR, augmented reality, ceramics, textiles and architectural rendering software. The project proposes a new kind of liminal space which weaves and encodes physical and digital spaces and textures to produce a mixed reality architecture, an aesthetics of the fake.

Hart’s liminal space is maze-like and symbol-heavy, a reinterpretation of the ‘labyrinth of the minotaur’, the inescapable maze known from Greek mythology. It combines aspects of emoji culture, symbols of casino-capitalism, immersive audio and appropriated computer models taken from the 3D Warehouse digital repository. By doing so, it raises important questions about the nature-culture relationship and how space and materials can be understood if technology has replaced nature. It also creates space for thought about the rhythms of capitalism and the icons of power, money, addiction and control.

The Flower Matrix is on display as an immersive mixed reality chamber at Wallplay’s VR ‘speakeasy’ in the basement of Gallery 151. It is best viewed as individuals, duos or trios. Please leave time for an immersive experience.

The work was commissioned as part of the TRANSFER VR Commission, which supports the development of artworks which expand the way we think about embodiment and physical encounter.

Jake and Dinos Chapman Exhibit in Spain and Switzerland