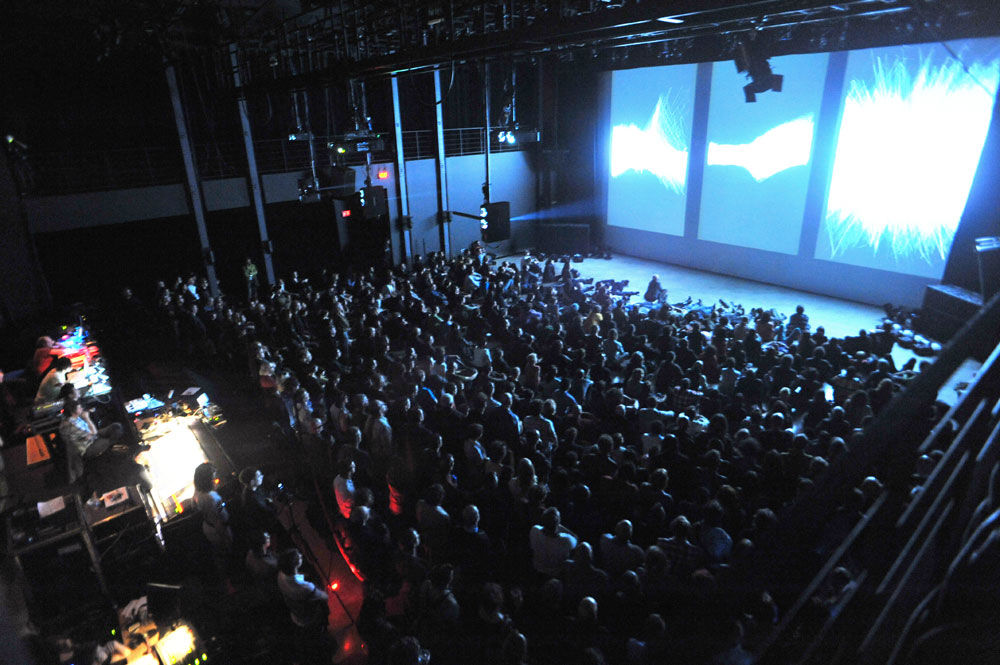 Japanese digital artist Ryoichi Kurokawa’s impressive canon of audiovisual works appear as technologically advanced exercises for the mind and the senses. The works combine vast symphonies of sound with terrifyingly intelligent x-ray anchored animations that manifest as a hypnotic swell of audio and image propelled into space. An intricate matrix of beautifully choreographed activities is presented and intentionally dissolved in a series of advanced works that throw precise and imprecise sparks at the spectator in an attempt to describe and understand technology’s elemental embrace of nature. Kurokawa’s works generate molecular life forms that, once animated, appear to dissolve to dust; they twist and turn before the sequence and sound changes tack and the animated images evolve into new, more complex computer generated forms that hover before disappearing from view. This evolutive process take places against a backdrop of corrosive sounds and technical interferences which appear in a kind of tension with organic life. We had the chance to speak with Kurokawa ahead of the release of a new series of works Sirens on Sedition next year and during the launch of his Kickstarter campaign for FACT in Liverpool for a major new commission and solo exhibition in Spring 2016.

Sedition: For an audience less familiar with your work, can you begin by explaining and exploring the principles of your practice?

Ryoichi Kurokawa: I create sound and visual works that have a very diverse format, which include installations, full-scale concerts, cinematic screenings and audio recordings. All of which take the form of multi-channel sounds, coupled with technologically advanced displays, projections and 3D sculptures; in order I can advance a series of ideas at the same time. 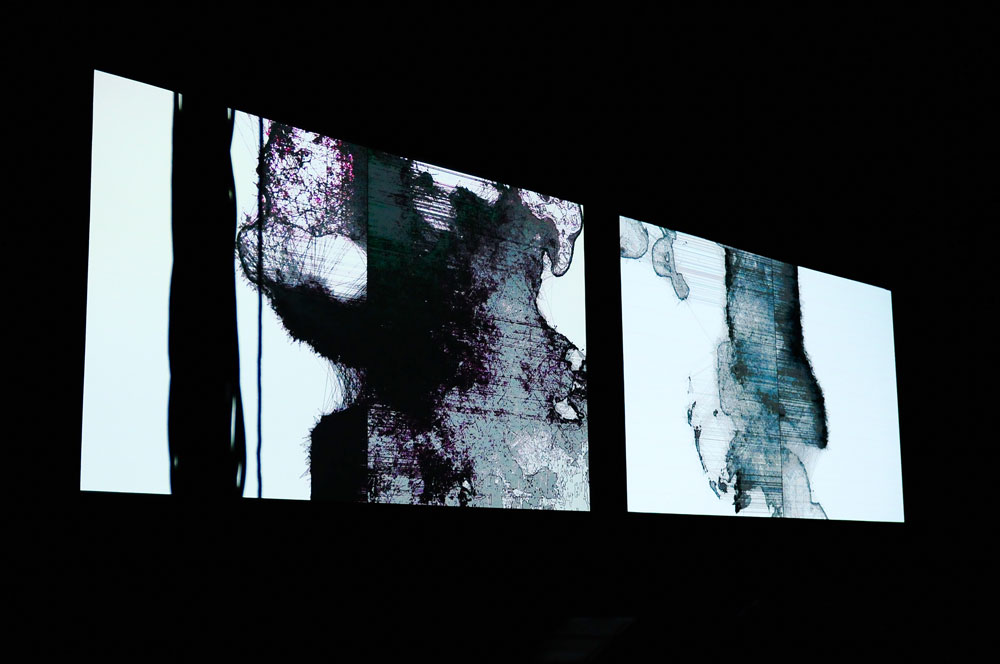 S: Can you go on to discuss the works you have planned for Sedition and their significance to your practice?

RK: For Sedition, I have released three short pieces that are modules from my 2011 concert piece syn_, and in due course plan to release an additional element from my 2012 work Sirens, which was originally a collaborative project with Greek musician Novi Sad.

S: As an artist based in Europe what originally took you from Japan to Germany?

RK: I moved to Europe in 2008 from Japan because the evolution of my work and the majority of my new commissions were European based, though I still have strong visual, cultural and emotional ties to Japan.

S: Do your influences come more from the environment you are in, or are they entirely global?

RK: Both my immediate environment and the wider world. As I try to consider things multi-dimensionally.

S: Your work is described as a combination of installations, sound recordings and concert pieces; how do you manage to marry such diverse interdisciplinary approaches? And what about the scale of the works?

RK: My greatest interest is to create and compose sound and light, in order to ‘design time’ as time-based media. With my work the final art formats can be very diverse, still the majority are based on audiovisual compositions. And as I mentioned with my multi-disciplinary approach, I do not discriminate on the basis of medium. Scale is entirely dependent on the piece, as I can concentrate on compact single-screen works, and then employ all of the tools to create large scale immersive pieces.

S: Can you explain the notion of a ‘digital generated structure’? And with regard to your referencing ‘structure’ and ‘reconstructing the architectural’, are you building works in space?

RK: The initial elements are generated on computers, as my works are a mixture of generated components and field recorded materials; all of which are correlated in time and space in order to advance artificial ideas and real material collaboratively.

S: Regarding your early works, I am intrigued by the broken up visual imagery and corresponding sound of Copynature (2003), how do you explain that work?

RK: That original concept was based on the reproduction of nature, which is still one of my main themes for creating artworks. By employing natural components such as form and movement that are copied and positively reconstructed to create a new order. Moreover the precarious relationship of order and disorder plays an important role in my works.

S: Were you working in a similar vein when producing the work Read (2004)?

RK: This work centres on the concept of synesthesia, and of how to listen to the imagery, how to see the sound, and how to read audiovisual language. This synesthetic experience is always one of my most important approaches.

S: There is an arresting texture to the visual output of the work. As a proviso when considering reality as a construct, do you see everything two-dimensionally?

S: In celeritas (2009), you turn technology into an alluring landscape, in which the sequence becomes an audience’s longview. Is the works detailed abstraction impressive and imperative for you, as you’re creating light and sound in space?

RK: Accumulative abstraction is imperative to my works. Concretion guides you a lot as it gives exact meaning to something, whereas complete abstraction sometimes makes it impossible to recognise the original sign. Drawing attention to both I value the feeling floating between abstraction and concretion.

S: Can you explain what you intended with your Montreal performance of Rheo (2009)? And of how your accumulative audience responded to such a vast installation of sound and animated sequences?

RK: Rheo is a concert piece which is presented as three vertically long screens with surround sound, inspired by the words ‘panta rhei’ that were left by Heraclitus. The term ‘rheo’ as the title means flow, current, or stream from the Greek word. Essentially this concert piece is more cinematic, as it is less abstracted in comparison with my general practice. So the audience is able to easily build their own story or create their own impression. 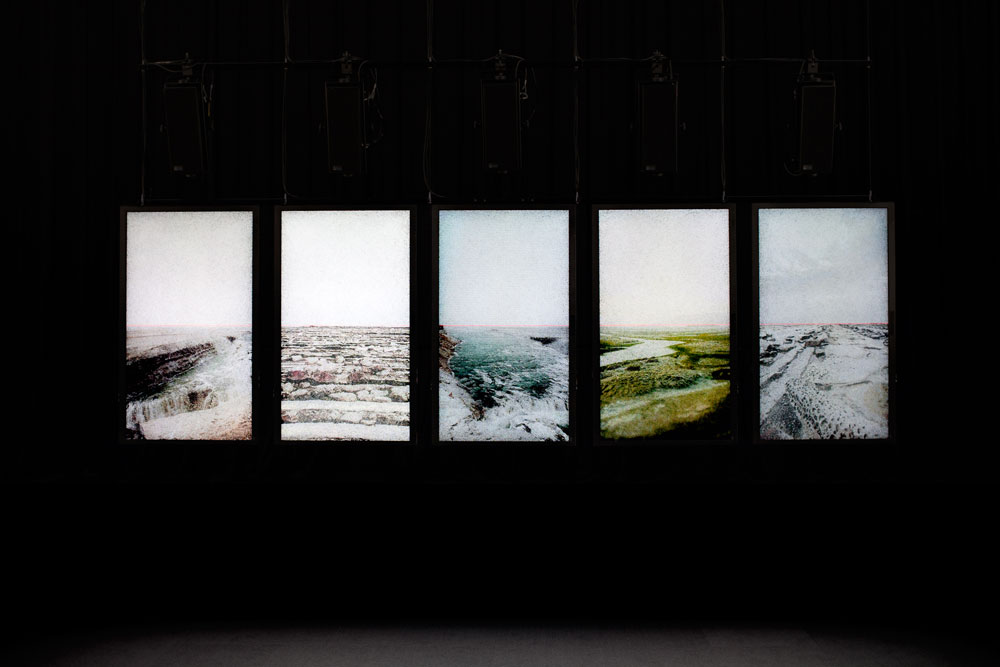 S: Does abstraction visually and via new technologies allow for many more possibilities with works like Rheo: 5 Horizons? And in terms of the digital matter, are the combined animations intended to be at the service of sound?

RK: This installation is composed of five flat-panel-displays with five multi-channel speakers whereby the images are paired with a mono-channel sound, as each video is synchronised to a particular audio. By synthesising the individual images, the sound cognition can be enhanced accordingly – in order for the behaviour of the resulting imagery to reveal its own sound source position, sonic direction and drive. As the work provides the space to rediscover the sonic movement, position, and the relation between ego and sound. These resonances have an impact on sensory perception in order for it to develop a similar synesthetic experience. The sounds also add width and depth via an integration of auditory and visual sensations, and it continuously builds spatial audiovisual construction which offers a renewed recognition of space.

S: Ground (2011) plays with documentary footage of the political and personal unrest in Iraq and Afghanistan; that in your hands becomes the material matter for an artwork of beleaguered people, dilapidated cities and conflicts with uncalculated consequences. As much as creating a work of subtle sophistication, are you critiquing wars and their collateral damage?

RK: This work represents audiovisual expression by reconstructing the factual landscape that was originally recorded in the Middle East and South Asia by Belgian war reporter Daniel Demoustier. With Ground I do not intend to guide the viewer even if I refer to those materials. In fact I seek to purposely abstract the meanings.

S: By replicating the enveloping verve of an unrelenting waterfall in Octfalls (2011), are you attempting to celebrate nature over new technology? And in so doing does the installation become something of a secondary experience?

RK: Nature inspires my work a lot, and my attempt to reconstruct nature has been one of my main concerns from early on in my career, but to qualify that, I in no way attempt to celebrate nature. Nature is beautiful, but there is also something fundamentally unique to artificial material, and that is something nature cannot manage to replicate yet.

S: How far removed is a work like syn_ (2011)? Are you expecting an audience to leave reality outside upon entering into your digitised drama?

RK: Crucially, I do not intend to give guidance to the viewers on my works, and specifically with animated works like syn_, as I remove entirely the conception and emphasis of the behaviour of an audiovisual phenomena to [allow an audience to] perceive and experience physically sound and images more purely. 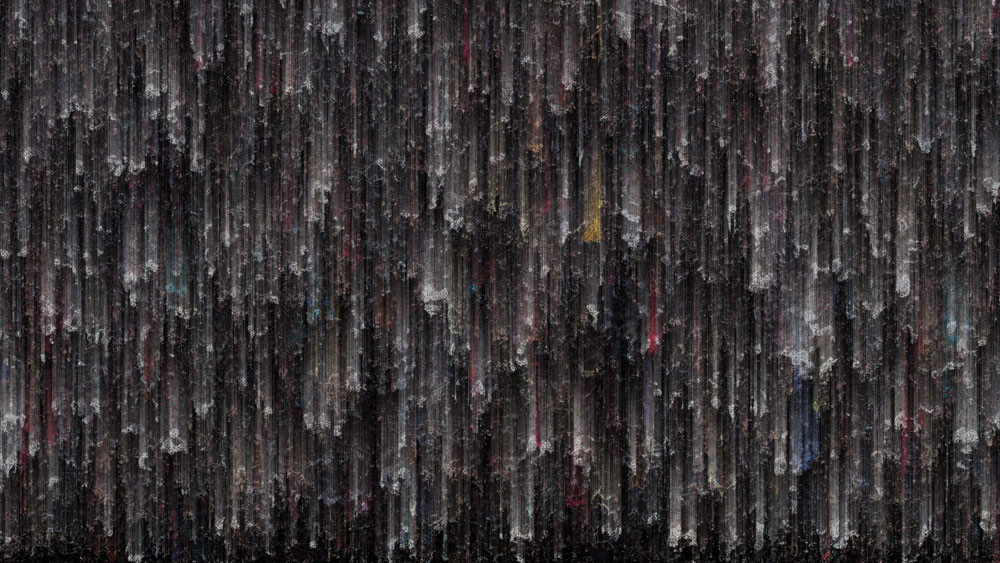 S: You appear to want to deconstruct and dissolve all anatomical evidence of reality in Sirens (2012) in order to create these futuristic forms. Does technology offer something more attractive?

RK: Technology has a quite important role on my artwork. But my purpose is not about showing technology off, I intend to employ new technologies as an advanced tool to create an artwork that is between the actual and artificial. 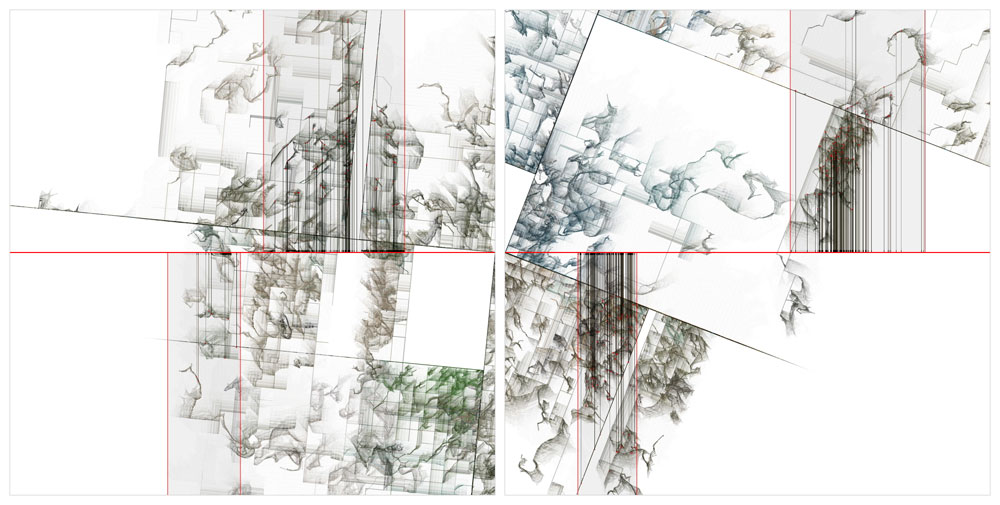 S: With your work oscillating continuum (2013), it is as if all information, created and constructed, is essentially reduced to a level of interference; less wordy reality, more white noise. Therefore is there an underlying encrypted code for everything that is less coherent and more chaotic?

RK: It is an audiovisual sculpture presented as a dual white structure, consisting of two displays on a parallelogram base, each of which contains a speaker. These two structures would not stand up straight if it were not for them keeping each other balanced through a coupling plane. The two displays are opposite to one another but on the same axis. Intrinsically, every force and all matter in our universe oscillates continuously, and we maintain equilibrium by being bias and acting with feeling. The drama occurs when all stability breaks down, where upon the higher the instability is, the more it has the possibility for greater energy. As the structure of this work micro and macroscopically exhibits these laws, and the audiovisual components inside the structure states the disorder to order. And fundamentally two different images, communal in form, with complementary and opposing elements balance the duality of the periodic flow. 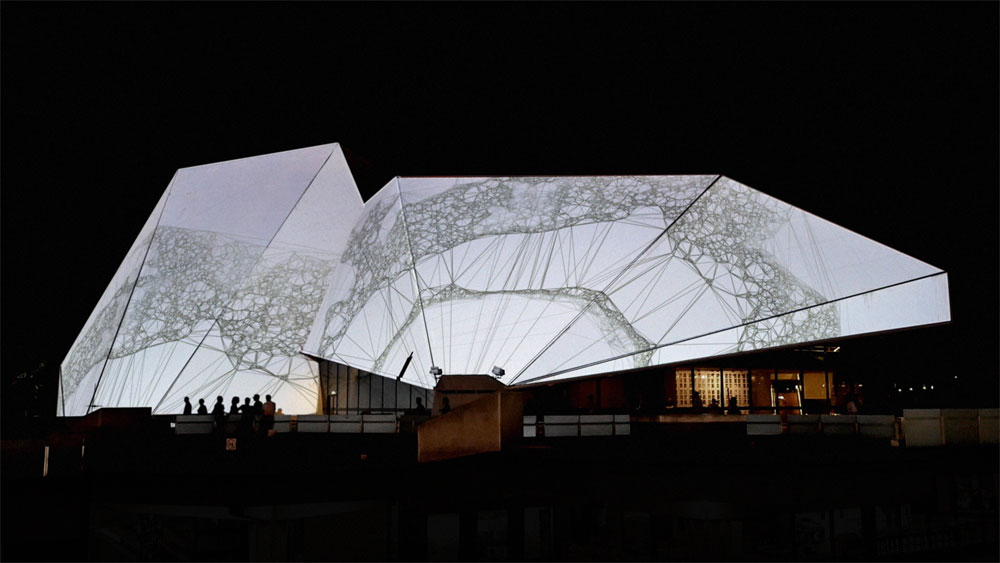 RK: The large scale presentation makes it possible to have a more dynamic and unexpected impact, as there is a lot of potential outside of the studio. And for me the unknown is very significant when considering the alternatives that become possible in my works.

S: With your most current work constrained surface (2015), is it important that the technical apparatus has its own aesthetic allure?

RK: Technology and new tools are another important factor within my works. That make for new methods and digital expressions; but I intentionally do not accentuate those technical components.

S: Finally, what are you reading right now, and has that an influence on what you are working on at the moment?

RK: At the moment I am not reading anything, as I am currently in the middle of production for new projects (unfold and node5:5). Though reading has influencing me a great deal and continues to act as a trigger for many of my advanced ideas.

Ryoichi Kurokawa is crowdfunding his upcoming exhibition and new commission unfold at FACT Liverpool. Pledge now on Kickstarter to support the project to receive Kurokawa’s syn_ collection of digital editions from Sedition. The campaign ends on 23 December 2015.