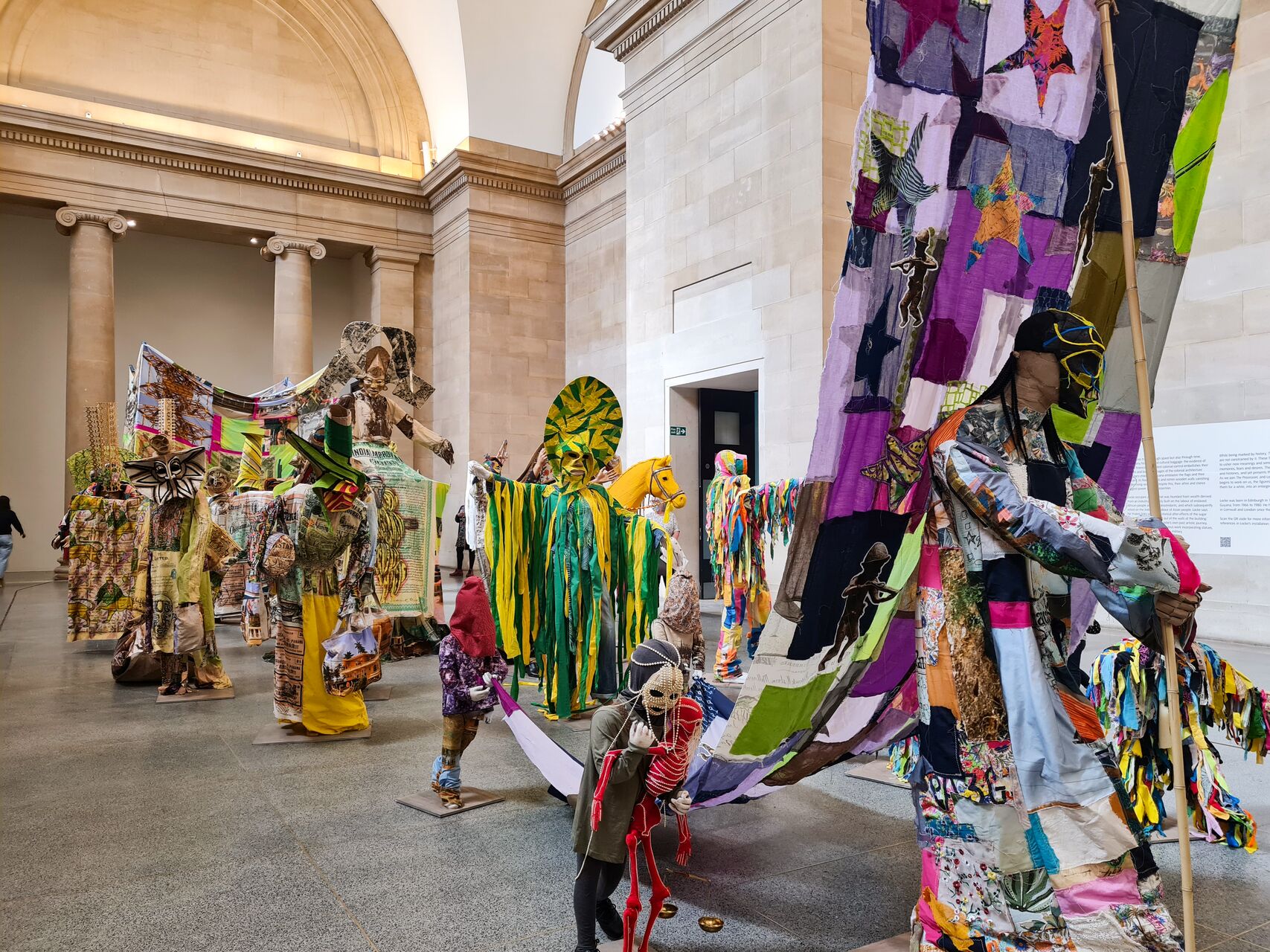 Hew Locke’s The Procession, a new large-scale installation, was revealed on 22nd March at Tate Britain. Colourful, miscellaneous figures from children, pregnant women to skeletons and goddesses are marching all together and occupying the Duveen Galleries. As walking along this surreal parade, audiences follow the history of civilisation and discover the stories of each figure. The Procession carries historical evidence of trade, empire and colonialism. At the same time, it reflects the current and future world facing environmental and humanitarian crises and social disparities behind affluent modernity.

Sedition had a conversation with Hew Locke about inspiration and experiences with The Procession and how he combines past, present and the future with art practices.

Sedition: Can you tell us more about the new commission for Duveen Galleries at Tate Britain?

Hew Locke: The work’s just been unveiled. As an artist, I’m just about to figure out what the work is really about, to be honest here. The Procession is a bunch of people who are moving from the past into the present and into the future. We don’t know exactly where they are going. But they are moving with the purpose. They are all very different characters with very different stories behind them. (For example) There are two guys carrying a shrine, and the shrine has a white mask of a person in it. It is a death mask of Napoleon. In The Procession, there are references to slavery, the nightmares in Ukraine, and many others. This is a wide ranging piece of work. Sedition: Some of the figures or their props are made of newspapers. Is there any historical event you focus on? Could you explain more about this?

Hew Locke: What I used throughout the whole piece is my own custom-made fabrics. Fabric usually has referencing share certificates and their financial history. In the artwork, there are a lot of Chinese share certificates from the late 19th century when China was a very different country from what it is today. There’re also references to Indian shared certificates. It references colonial times. The imagery on the fabric which decorates these figures is talking about the past and present. A whole the past affects the present that’s something which people ignore at their peril I feel.

Sedition: What was the inspiration behind your creation for The Procession?

Hew Locke: Many things. Tate has a history in the sugar trade. I’d stress that Tate was not involved in the slave trade because it started after that. But, the sugar industry in the late 19th century when Tate was operating, was not good. Life was really tough. So, I had images of Jamaican cane cutters who worked in the sugar cane fields as references to talk about this. I also wanted to get imagery talking about where I grew up in Guyana and the history of colonisation there.

What I’m talking about here (in The Procession) is quite a difficult subject matter. But I wanted to make something look colourful and uplifting. Because I can’t live in misery, I cannot operate in that way. I need to have hope. When I look at the difficult aspects of the past, I tried to present that difficult information in a way that is attractive to my own personal self. I needed to go to the studio every day and felt I involve something positive here. 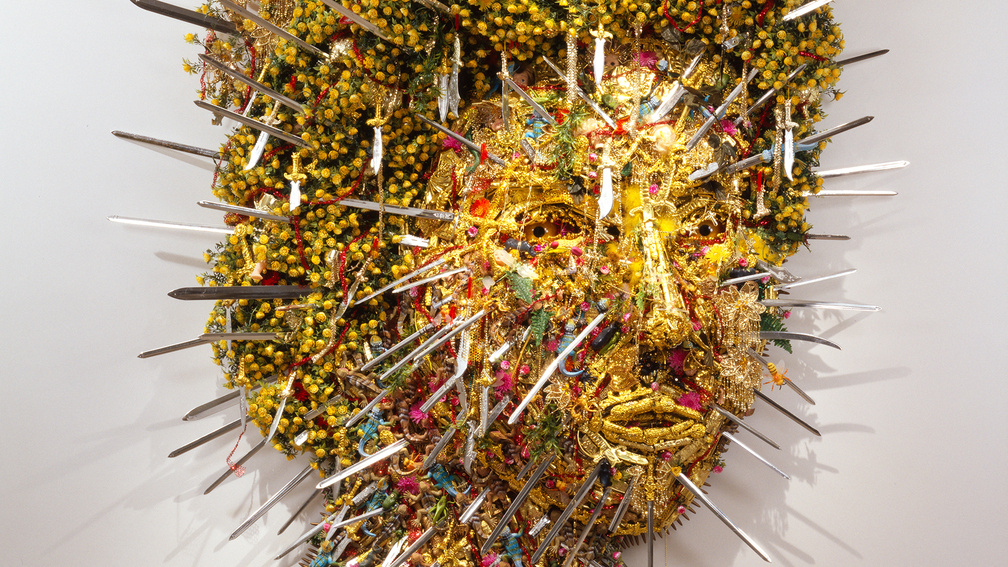 Sedition: Many of your artworks like The Procession, El Dorado or Black Queen, include richly decorated elements with different materials, symbols and ornaments. How do you come up with those figures?

Hew Locke: It is my personal interest. How I come up with those things is from walking around museums, from trips I made to the various different countries in the world. Every time I go somewhere and make a journey, I always look for inspiration. The work I do is a mixing of all these experiences, collecting together to make what I call, invented culture. I look at certain aspects of the piece, I think “Well, that’s from India, that section there is inspired by traditional African carvings, this other section will be walking around Victoria and Albert Museum in the section with all shiny gold objects”. So, after a while, I can look at each piece of work and go “that was that experience”, Then they all merge together, become mixed up together.

Sedition: How do you foresee the future as an artist?

Hew Locke: As an artist, the future for me is looking good, fingers crossed.

The future for art, how I feel about the generation of emerging artists is there are many more opportunities. But - there’s a big but - many more people chasing those opportunities. In this country (UK), in this city, London, it’s really difficult for the younger artist which irritates and upsets me.

Art is the first thing that kicks out when there is a financial crisis. I think that needs to be rethought, it’s important, in an intangible way, the way you can’t completely explain, if art was removed completely from the picture, the world will be a really bleak place.

Visit the artist’s profile or Sedition’s Vimeo to watch the full interview with Hew Locke.

Tate Britain Commission: Hew Locke: The Procession is on at Duveen Galleries in Tate Britain, the UK from 23 March 2022 – 22 January 2023.