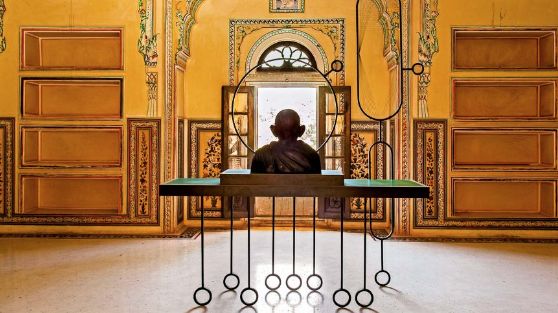 From the Memorial series by Thukral & Tagra. Image via Architectural Digest

An expansive new sculpture park has opened in Jaipur, providing exciting new opportunities for public art works in India. The park, the first of its kind in India, will open with a large year-long exhibition featuring works by acclaimed international and Indian artists.

The sculpture park was set up by Aparajita Jain and Peter Nagy, co-directors of the experimental art gallery Nature Morte in Delhi. It is located in the grounds of Madhavendra Palace, one of a number of palaces within the 18th Century Nahargarh Fort complex on the edge of the Aravalli hills in Jaipur, Rajasthan.

The sculpture park, and the artworks on display, are intended to celebrate India’s rich heritage and the cultural contributions the country has made to the world. The setting and programming of the park are also intended to bring contemporary art into closer contact with the Indian public. The project is backed by Indian government and by corporate sponsors.

The exhibition is accompanied by introductions to the works in English and Hindi. It runs from December 2017 to November 2018 and will be followed by a new year-long exhibition.

The Artists On Our Radar: Don't Miss These Exhibitions In London And Berlin This December