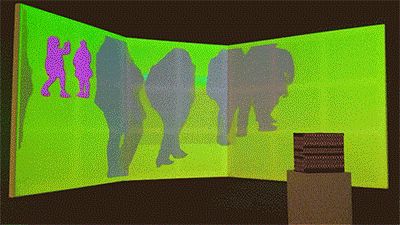 From 4 March to 19 June 2017, LoVid present a new collaborative work Reaction Bubble in a public exhibition at Real Art Ways, Hartford, CT, US.

Commissioned and produced by Real Art Ways, the show is the culmination of a four-year collaboration between LoVid, choreographer Deborah Goffe, ceramicist Matthew Towers and technologist Tyler Henry. The public exhibition includes a series of dance performances choreographed and performed by Deborah Goffe.

The exhibition is an examination of physicality. The collaborative work which led to the public show was influenced by Proxemics, an anthropological field which looks at the significance of the distances between interacting physical bodies. These distances are described as conceptual bubbles. Each “bubble” is a different size and is appropriate for a specific type of interpersonal interaction: Public Space, Social Space, Personal Space, and Intimate Space.

Reaction Bubble plays with bubbled and hybridised space, exploring its influence on bodies and environments using custom electronics, video, ceramic sculpture, and choreography. The artists involved took part in an exchange of skills and ideas, the focus on ‘the spaces between’ producing an open and malleable project structure. Broadcasting this openness, the combined elements of Reaction Bubble mingle and overlap in a multi-level exploration of distance and proximity.

The project received major support from The Robert Rauschenberg Foundation. Other funders include the Edward C. and Ann T. Roberts Foundation, the J. Walton Bissell Foundation and the National Endowment for the Arts.