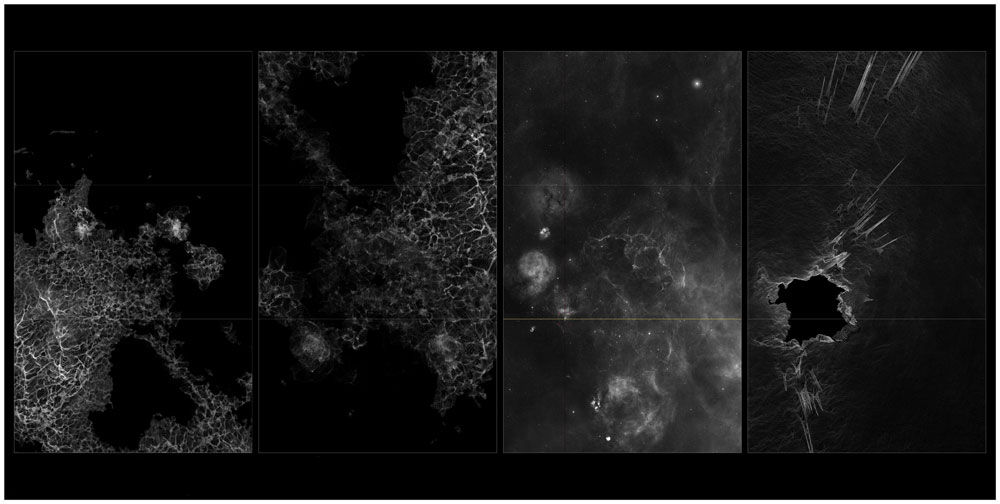 unfold is a major new commission by acclaimed Japanese artist Ryoichi Kurokawa, exploring the birth and evolution of stars in a groundbreaking immersive and tactile audiovisual installation. This unique sensory experience will be part of Kurokawa’s first ever solo exhibition in the UK, premiering at FACT (Foundation for Art and Creative Technology) in Liverpool 11 March - 12 June 2016.

unfold will offer viewers an artistic, yet scientific, representation of how the solar system was born, and how our galaxy might evolve, and is the result of a unique cross-disciplinary dialogue between science and art. Kurokawa has been collaborating with Vincent Minier, astrophysicist at the Institute of Research into the Fundamental Laws of the Universe‎ (CEA Irfu, Paris-Saclay), which enabled him to construct his vision of a molecular cloud as close as possible to the scientific truth, using striking 3D representations of space, combined with interpretations of how star clusters form within the cloud until the birth of sun-like stars. By bringing this data to life, Kurokawa will allow visitors to be transported into space through beautifully visual and sonic environments, enhanced by bass shaking floors.

For the past ten years, Ryoichi Kurokawa has excelled in both the electronic music and visual arts scenes, mixing video images, audio recordings, graphics and animations to produce stunning audiovisual installations and live performances. His vast time-based works create mesmerising environments, which combine audio and visuals to produce spectacular, synchronised experiences where sound and image become a single unit. Kurokawa’s works have been shown across the world at international festivals and museums including Tate Modern and the Venice Biennale. In 2010, he was awarded the Golden Nica at Prix Ars Electronica in the Digital Musics & Sound Art category.

unfold will be presented as a large scale multi-screen and surround sound work in FACT’s Gallery 1, along with other iterations throughout the FACT building and surrounding area. The exhibition will also include previous works by Kurokawa, and a programme of experimental live acts by emerging and established sound artists and electronic musicians.

Coinciding with the opening of unfold on 11 March, performances include Kurokawa's work syn_, presented by FACT and Liverpool Philharmonic at Liverpool Philharmonic's new venue Music Room. syn_ will explore abstract and musical patterns, simultaneity and synaesthesia - the correspondence of sensations and perceptions, such as sounds and colours - and play masterfully on harmony and dissonance in this breathtaking immersive experience.

unfold is co-commissioned between FACT, Stereolux and University of Salford Art Collection, with the support of CEA Irfu – Paris-Saclay, Arcadi and DICRéAM.