Snow Yunxue Fu: At the liminal space between digital and physical realm 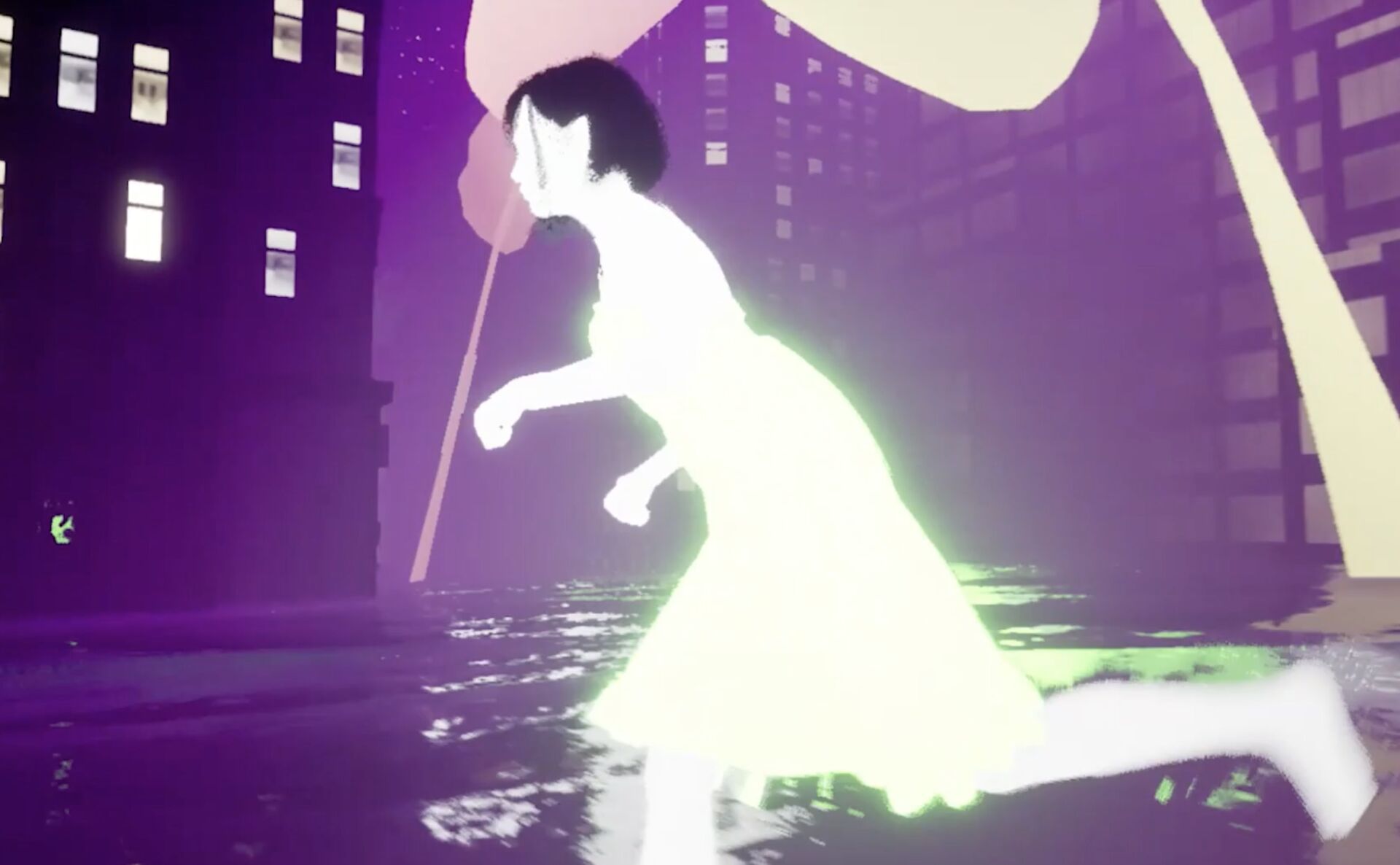 Fu is also intensively using Virtual Reality and Augmented Reality to extend the experience of the digital creation and to engage the movements and sensations of the audience.

As an artist, a curator and also an assistant professor at New York University Tisch School of the Arts, Fu's experiences gave her permission to contemplate and to approach digital art from a diverse perspective.

Sedition had an opportunity to interview Snow Yunxue Fu via video call and to have an in-depth conversation. The artist shared the works, ideas and processes with us.

Sedition: Can you explain your recent works launched on Sedition, Run and The Room?

Fu: Run is an art game piece. This work is set in the metropolitan environment; A vast cityscape with various atmospheric events, part of it is raining, part of it is dry, and part of is immersed under the water. This piece is made last summer. While I was making the piece, there’s news coming up here and there, both in Europe, in Shanghai and also here in Newyork, about a lot of flooding is going on. So in this sense, the piece is reflecting the idea of human development in relationship to the natural world and how we are impacting it. As a player, you have this protagonist who is a young lady, in her pyjama - so essentially she is sleepwalking or I should say sleep running. - She is going around the different cities. [...] She can fly through, she can walk and go amongst different areas to experiences different atmospheric events while she is the only person in there. On the other side, this is a commentary about modern society, we keep going and keep going, and we keep going. Somehow, that’s how we sustain the economy, and that’s how we find value and worth but sometimes people feel lost with the endeavour. As a collective and as we developed more and more spaces and cities, I think there’s a type of conflict in nature. This piece is a reflection of humanity as a whole. 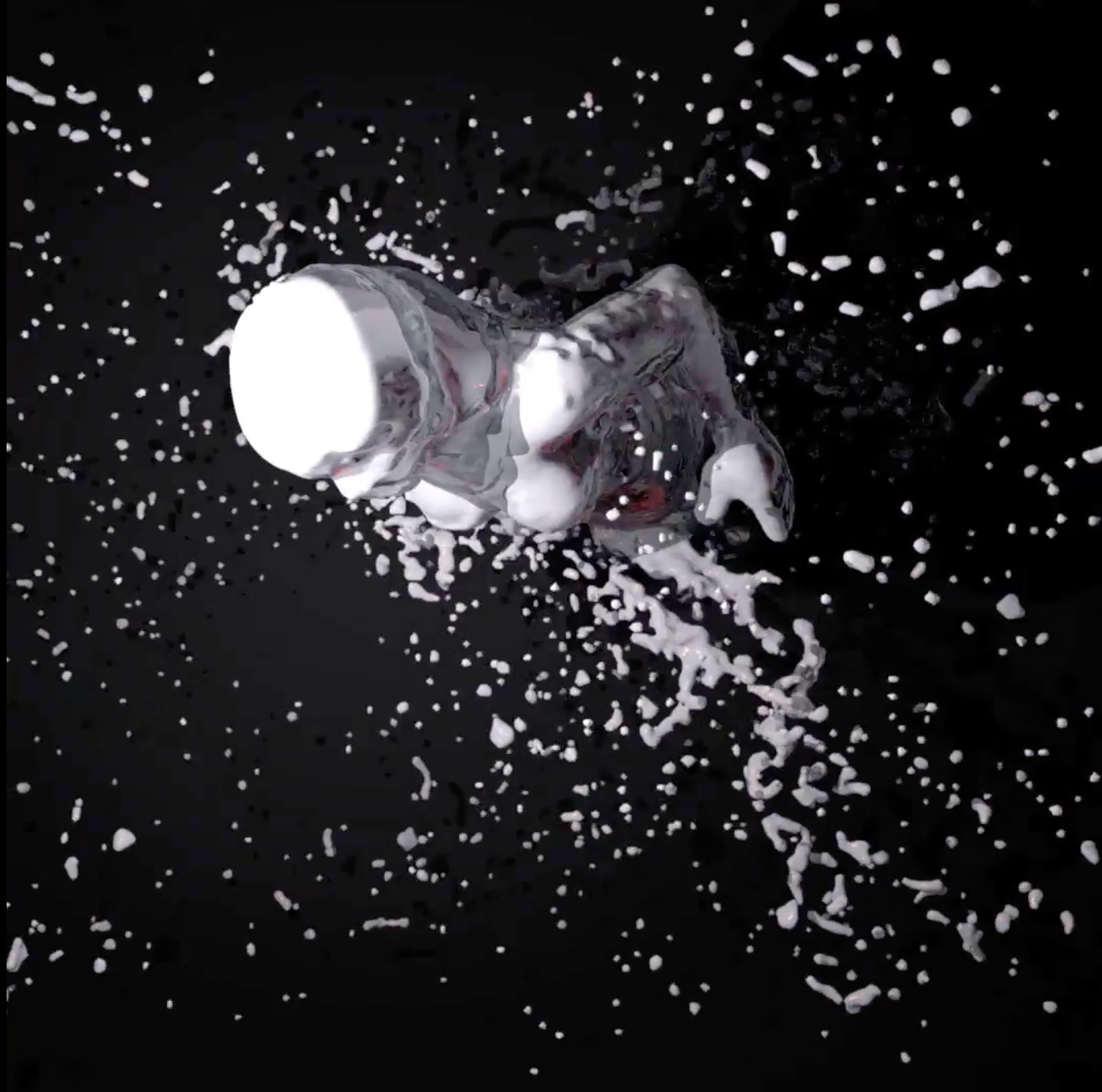 A still from The Room by Snow Yunxue Fu

Fu: The other piece calls The Room. This is a 3d moving image piece where an abstract body is immersed in water and disintegrated into pieces. She is very confined in the space, where the viewer is given the top-down view. She cannot get out of the black box and as a viewer, we see her being trapped. She is shape-shifting and having this journey.

This is a reflection of human life, I put in a description there as a line for the piece “We have a long-term dilemma, for we have a short-term body.” It can be meditation or a confrontation of our finite nature of human living. I think it’s also an eagerness for something that’s more lasting. It is reflecting, the virtual (world) where we put ourselves into the internet and there’s almost a digital double of us now. Although sometimes it becomes a trap as well. This is piece is the investigation of all of those aspects. 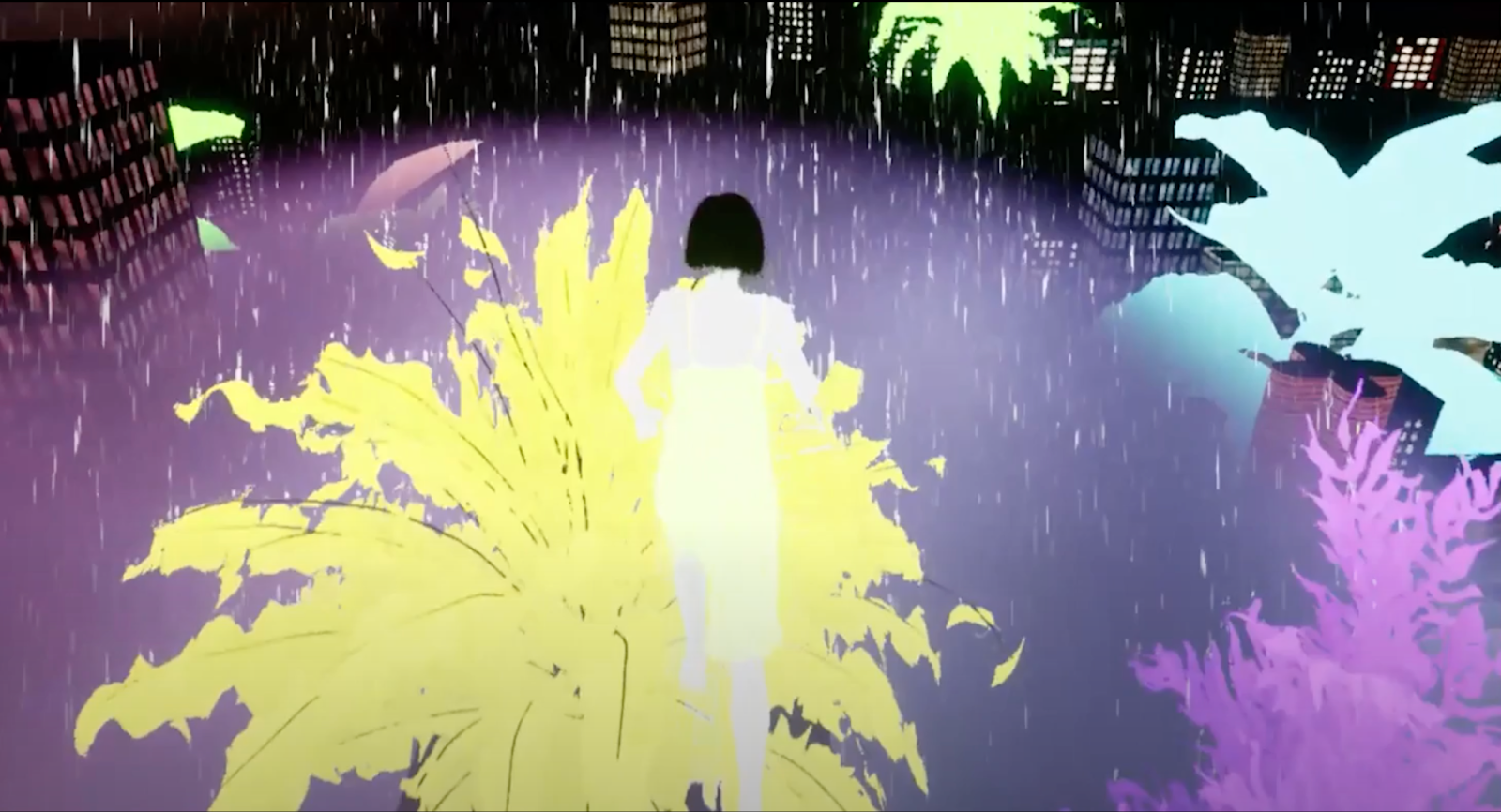 Sedition: RUN is an interactive game piece originally. How did you start to make it as a game?

Fu: I think the idea of the game is embodied movements mediated with computer interfaces. I started to be more and more interested in interactive works in recent years, and I found there’s a new type of experience that my audiences have with those works. When audiences are not only engaged with their eyes, as a player, they have to connect with their bodies. [...] Interactive media in 3D is a really interesting tool for artists to use. Artists are super interested in reflection of life, experiences - game experience and our experience.- There is a nice parallel and a translation piece setup like games.

Sedition: Where do you find the fascination of creating virtual environments and making a story through them?

Fu: [...] There was also awareness to think of ‘is there a media more relevant to our day and age’. That prompted me to look into the area where my formal training wouldn’t. Coming into digital spaces especially with 3D imaging, I felt really free in terms of creating images. Because as it’s a fairly new medium, there hasn’t been too much baggage. Yet.

Whatever I was doing, there were refreshing exploratory aspects. [...] When I share the works with the community and friends, even with other professors, there’s a novelty going on. Digital art is still in an experimental stage although in the past few years it’s established and getting mainstreamed more and more.

I also really enjoy the idea of entering into this realm. I was trying to do it with painting, sculpting, photographing, in 3D with the technology of simulation. (In 3D) I was able to translate, mirroring the world as I know and also to extend, making things that are impossible otherwise. It’s the other parts of the freeing process, not only we can reference our physical world, how it works, but also in 3D, we can add it in an imaginary, make it do very opposite things compared to its physical counterparts. I am more and more in love with it. 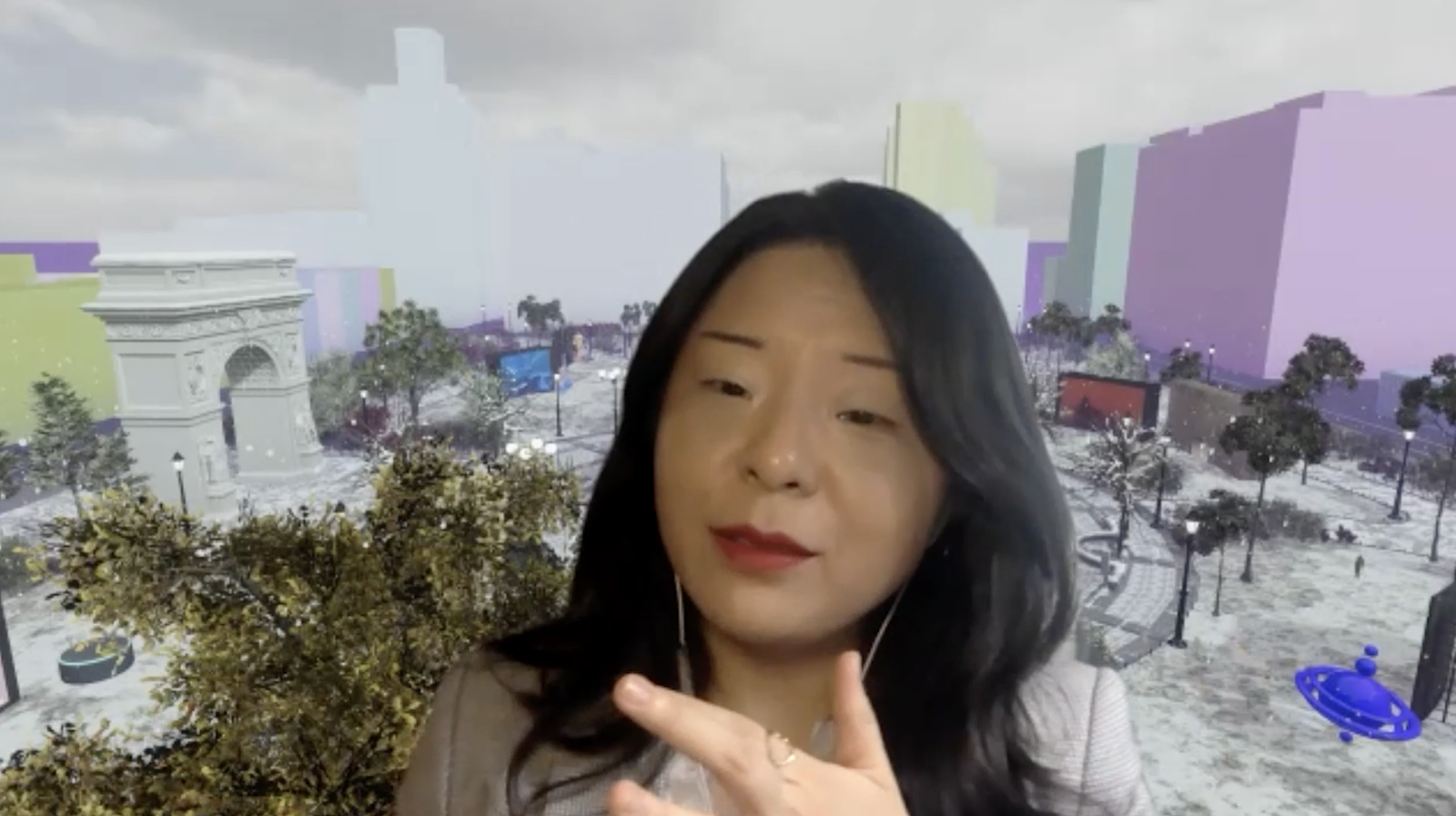 Sedition: You also work with AR and it seems you are bringing the digital medium to the physical world. Can you explain how you see the interaction between physical and digital realms?

Fu: This exhibition (Cavern-Us) is up with V-art. It is an interactive online-based exhibition space, and we were able to make an AR filter on Instagram where audiences can see themselves inside of the space. We wanted to make this bridge for people to feel unbound going to a virtual space, while they are in the physical space. This idea of phygital. [...] Sedition: How do you envisage the future of art in the virtual world?

Fu: At a collective level, there’s great potential in digital art-making. I am working with young bright minds every day. I really see, throughout the teaching of my student, how they are more and more native to this medium. Even the generation just born, you see them barely can talk but they are interacting with 3d objects on the iPad. It is the visual language of now whether it’s everything we consume every day in commercials, on TV, in film or as an artist, we use it as a tool to express ourselves. Large parts of the way we understand the world are through images we encounter on the internet or on our phones every day.

Maybe there are aspects of Plato's cave too. Sometimes flattened images can be a bit misleading. So, it is even more crucial for young people to understand the structure of digital images, therefore, also to actively engage in making them. I see more and more the people will be able to engage with this tool as it’s getting easier to use and hopefully more accessible. [...]

Dancing on The Digital Ground: A Glimpse into the Creative Practice of Wisse Scheele