An exhibition of work by

Yinka Shonibare CBE is on display at Hereford Cathedral until 1 June. The artist has been invited to respond to an iconic medieval world map, and has done so by making a series of textile works titled Creatures of the Mappa Mundi, which explore figuration, mythology and othering. The works were made in collaboration with local resident groups.

The Hereford Mappa Mundi is the largest surviving medieval world map still in existence. The map, made in Lincoln or Hereford in around 1300, depicts towns, people and animals, biblical events and mythological scenes, and follows the T and O pattern where the three continents of Asia, Europe and Africa are displayed in a wheel divided by the waters of the Mediterranean, Nile and Don (the T), encircled by the ocean (the O).

With Jerusalem at its centre, the map was a powerful piece of Christian iconography as well as a concise record of the lands best known in the West at the time. It was also a portal into unexplored worlds, populated with drawings of people and animals from faraway lands based on a combination of myth and the descriptions of travellers. 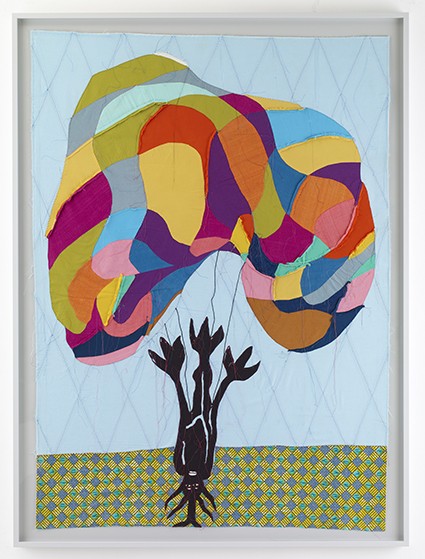 Inspired by the map and in particular these ‘otherworldly’ creatures, Shonibare has created a series of textile pieces, made using brightly coloured Dutch wax fabric, which hang in the cathedral. The works depict selected creatures and characters from the Mappa Mundi, and in doing so explore the concept of the other, how it has been figured in the past, and how this figuring has historically been inextricably linked to systems of power. By illustrating past versions of this relationship, Shonibare evidences parallels with the present. The depiction of people, animals, plants and other creatures has always been tied to domination and subservience, division and control.

Shonibare describes the work as dealing with “Two of the most pressing concerns of our time, environmental protection and immigration. Inspired by the ability of the Mappa Mundi to still be reflecting our contemporary concerns of fear of the stranger or “other” which often leads to xenophobia. The depictions of extinct creatures of legend are a reminder that we may yet become extinct if we do not take care of our environment.”

The works in the exhibition were made with different groups of people across Herefordshire, including the Courtyard Hereford’s Creative Ageing project; Diploma in Art & Design students from Hereford College of Arts; Rose Tinted Rags and charity for disabled people, Echo; young people from SHYPP (Supported Housing for Young People Project) and Hereford River Carnival. Each of these groups has worked threads into the project. As such, the production of the works extends the project’s focus on figuration and agency.

Creatures of the Mappa Mundi can be seen in the Mappa Mundi & Chained Library Exhibition, 5 College Cloisters, Cathedral Close, Hereford HR1 2NG from 24 January to 1 June.