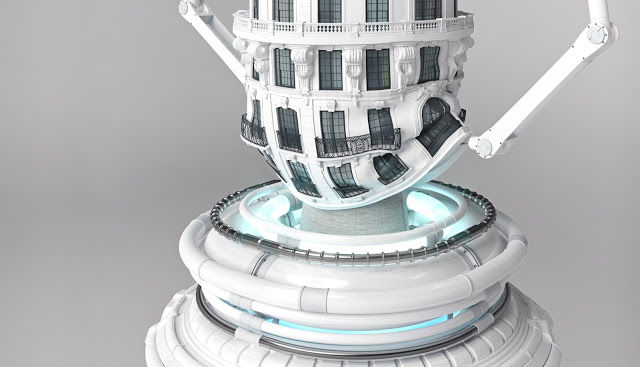 From 16 September to 29 October 2016, Jonathan Monaghan presents GOTHAM at Galerie 22,48 m² in Paris. The exhibition is Monaghan’s first solo show in France.

The works in the exhibition, which comprise sculptures, inkjet prints and installations, question the way wealth emerges or is built and the permanence of authority.

The centrepiece of the exhibition is 3D animated video, Scroll. The work shows a section of an endless column whose architectural facade is distorted as it crumples back, revealing the inner workings of an alien robotic being. The ambiguous living/non-living structure sends pods or seeds into the surrounding space, evoking the endless proliferation and multiplication of information via digital media.

The works presented in GOTHAM are mesmerising and otherworldly. They both represent and challenge ideas around the way wealth and power accumulate, and the collective fear of these accumulations. Together, the works examine boundary zones: the boundaries between real, imaginary and virtual, nature and technology, seduction and threat. In doing so, they explore the relationship between desire and dehumanisation.