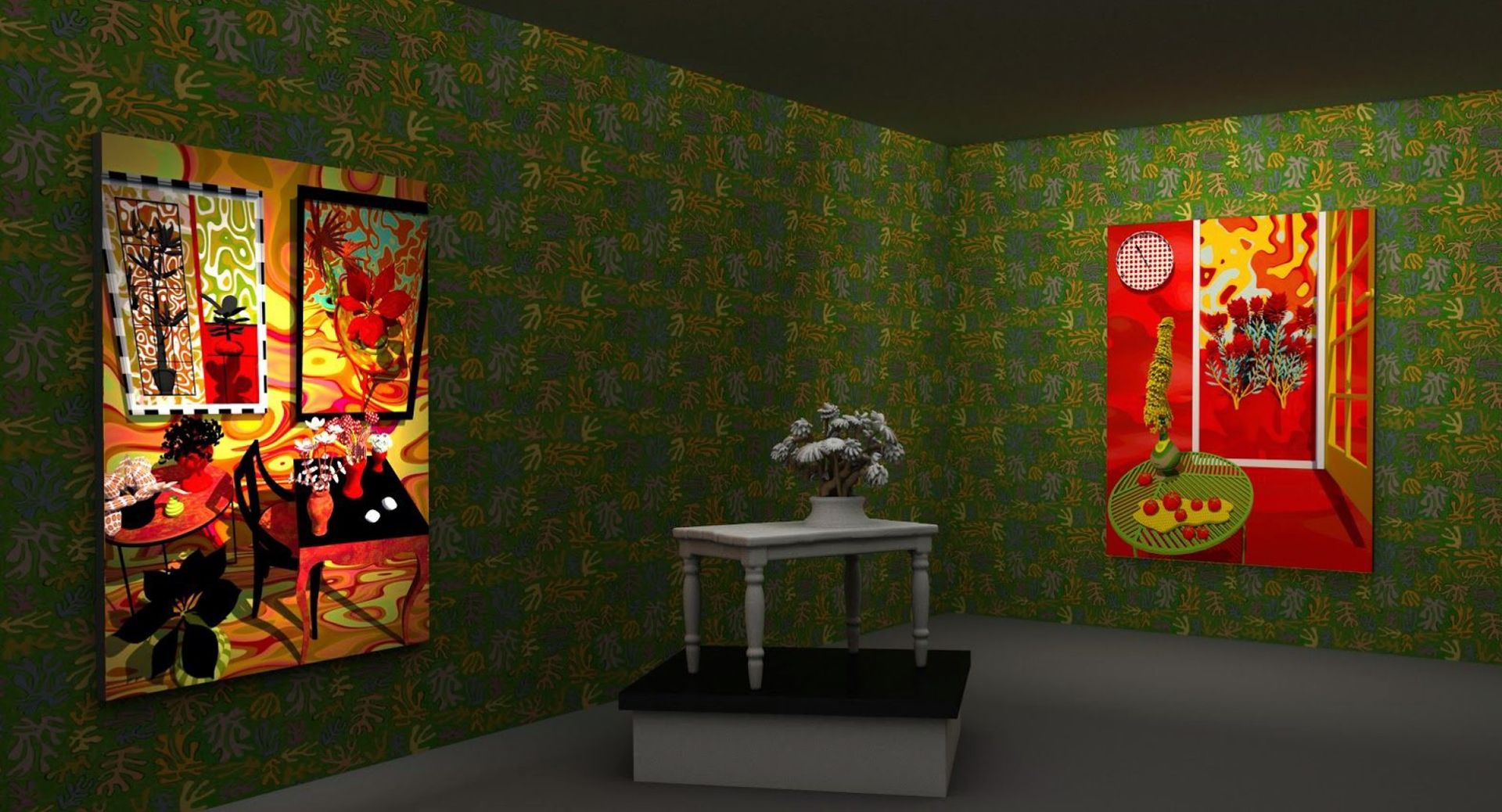 A new solo exhibition by Claudia Hart at bitforms, with music by Edmund Campion, looks at cycles of utopia and decay. The exhibition is viewable online via Mozilla Hubs and runs until 1 November. Presented as part of Ars Electronica’s 2020 festival hub, the exhibition is accompanied by a video interview with Claudia Hart about the project.

In The Ruins, Hart presents a set of works which look at ambitious manifestos and utopian ideas which resulted in failure. Through sculpture, animation and Augmented Reality wallpaper Hart takes the viewer on a series of journeys through degeneration which give insight into the way a collapse progresses and is materialised, and the lessons to be learned along the way. The exhibition is particularly influenced by Matisse, whose work coincided with early photography and questions of authenticity and copy, and one of the first artists whose work was copyright protected.

The exhibition playfully dismantles the canonical through the copyleft. Hart takes a critical look at the traditions of modernist painting, offering “an antidote to a world in crisis, navigating from a Eurocentric paradigm of fixed photographic capture into a reality of malleable and inherently unstable computer simulations and systemic collapse” - bitforms.

The exhibition features Hart’s distinctive AR wallpaper designs, which compress past, present and future into a highly textured liminal space. The wallpaper has for the last six years been developed by Hart with contributions from her students at the Art Institute of Chicago. When viewed through The Ruins app, the wallpaper reveals animations in which reappropriated relics of collapsed corporate superpowers interact with animals and text. Also on display is a 3D sculptural piece, part of Hart’s ongoing investigation into still-life tradition. The wooden work is a replica of The Still Life With Flowers by Henri Fantin-Latour, a 3D print made with a CNC router and rapid prototype printer, which in turn replicates a computer model of an 1881 painting by Fantin-Latour. For the online exhibition at bitforms Hart puts the work through another replication, having made a low polygon model of the wooden sculpture. 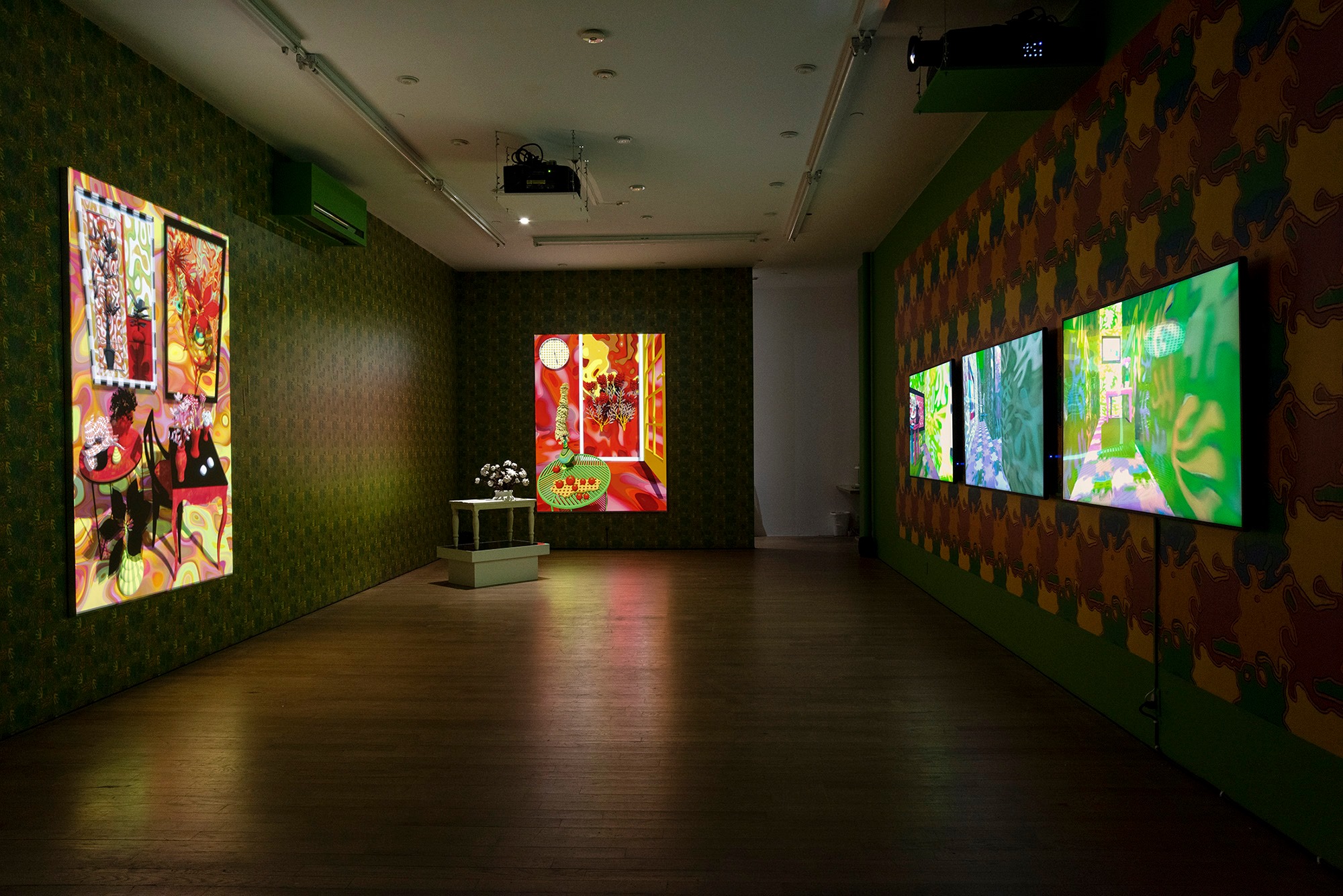 In addition to those in the wallpaper, two animations are featured in the exhibition. The Ruins (the exhibition’s central artwork) is a maze of low polygon models which imitate still life. The three channel artwork magpies references from Picasso and Matisse, augmented by Edmund Campion’s sound collage featuring Hart’s performances of the words of Henry Ford, Jim Jones and Walter Gropius among others. These collected references become ‘poor copies’ in a nod to the work of Hito Stereyl; they are “computer-made replications of copyright-protected paintings”. 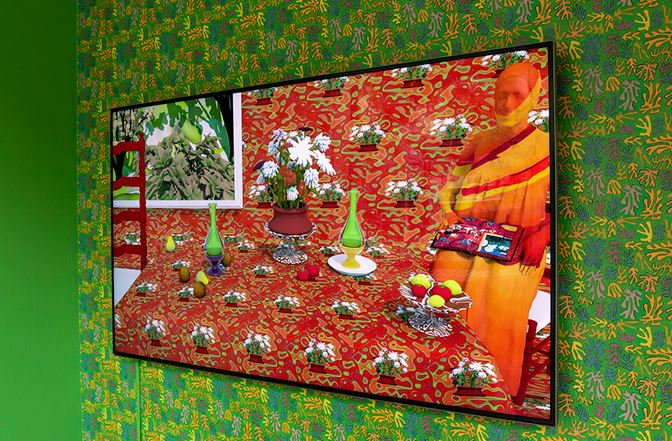 The second set of animations, The Orange Room, Green Table, and Big Red, further plays with copyright and computing. The large scale works are influenced by the collection of art held at the Art Institute of Chicago, in particular works by Matisse. “These works are constructed as images-within-images, architectures that open onto windows and doors and lead into simulated landscapes bestowed with animated paintings, carpets, and wallpapers. The digital, pictorial clockworks turn at different rates and temporal schemes to mesmerize viewers, ushering them into a state of contemplation.” - bitforms.

The Ruins is presented on Mozilla Hubs and is designed and supported by Matthew Gannt, with presentation support from NIIO and Barco, screens by Samsung, sound installation support by Jeremy Wagner and CNMAT, and the contribution of the CNMAT “Resonators~” synthesis object designed by Adrian Freed.