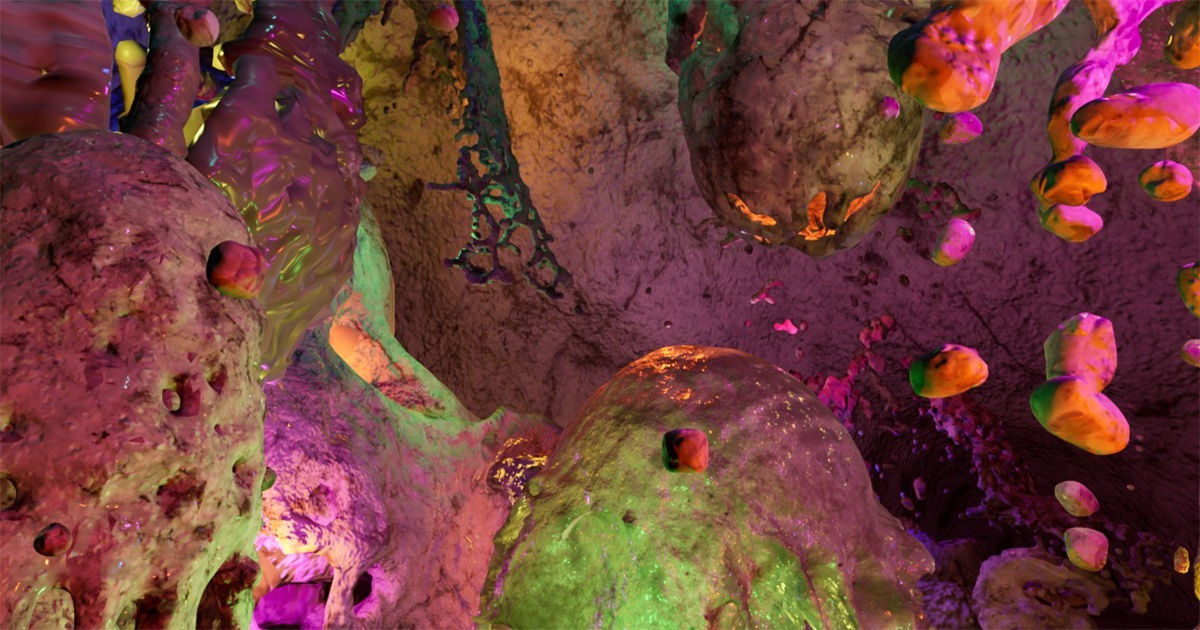 A Chinese-born and Chicago-based artist,

Snow Yunxue Fu explores the aesthetics and experience of the sublime through a wide range of digital media. From multiscreen megamixes of elemental forces, to oblique video installations that use architecture to control the viewers’ line of sight, to VR reconstructions of autobiographical sites that have taken on a new significance in the information economy, Snow reconstitutes ‘the natural’ in an uncanny CG aesthetic. She currently has works featured in the TRANSFER Download exhibition Simulations in Hyperspace in Santa Fe (which runs through Spring 2019) and the Current Museum’s collection.

To mark the launch of her new work on Sedition and related imminent opening of Karst (a VR piece that will show at the Other Art Fair at Mana Contemporary Chicago on 28th September), we chatted with Snow to learn about the interests that drive her practice.

Clouds, rivers, mountains—many of your works reference idyllic natural scenes, but you eschew photorealism in favour of a CG aesthetic. Is it fair to read this thread that runs through your practice as an attempt to exploit the tension between nature and ‘the digital’?

Snow Yunxue Fu: Yes, I am interested in the idea of digitally simulated natural scenes. I like to show the artificiality of digital landscape as a way to think about the materiality of CG. To a certain extent, I think the digital 3D construction parallels the formation of the natural landscape. The digital is also an expressive space, and by using the appearance of nature, I examine what it means to be human in the physical world—immersed in technological culture—in my work.

On the topic of digital 3D construction, you’ve been using the fluid simulation engine RealFlow to model terrain and water in recent works. Tools like this seem very sculptural to me, because they require you to resolve the volumes you are manipulating. This is an elaborate build-up to a quite simple question: what kind of sensibilities does your background in painting bring to how you wield tools like this?

SYF: I think as a painter, I am interested in the pictorial, the elements of compositions, and the overall construction of images. In many ways, I think simulation in is very similar to how you might approach a painting: you start with a blank canvas of three-dimensional, and anything you want to work with needs to be brought into it. But 3D is also this combination of many mediums: when working with models, it is a lot like sculpting; while lighting the scene and rendering out single images to test the setting is a lot like the photographic process; when animating the objects you’ve created, you have to engage the discourse around the moving image; and the output of the 3D software is essentially a sequence of images which are brought into editing software for post-production (sound and rearranging the image sequences on a timeline). Because of its multidisciplinary nature, I think the CG medium in general is a very rich place to work. 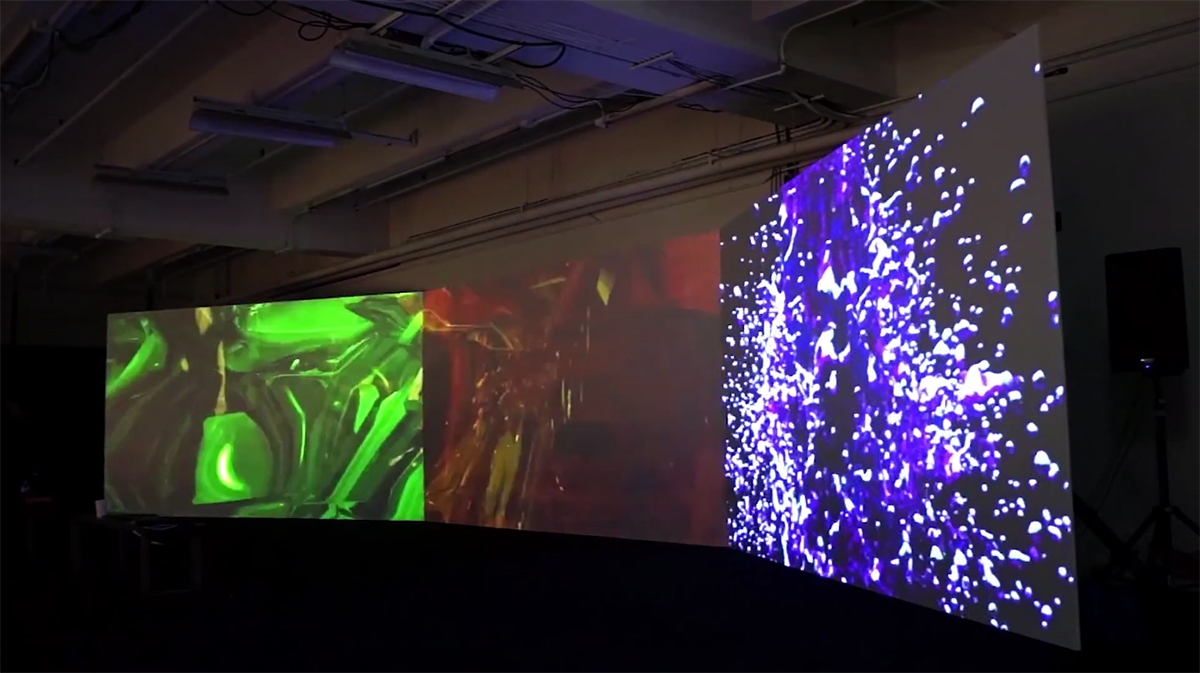 The sublime is quite central in your practice, how has Western and Chinese tradition shaped how you capture and represent it? Where do you feel those traditions converge and diverge, and how has that impacted you?

SYF: I think the idea of the sublime is a human issue that transcends culture differences. As someone who lives in a multicultural context, I am more interested in multiple traditions overlap rather than the differences between them.

It does not matter where you originally come from, what your culture heritage is, or your nationality, as one is confronted by their mortality and therefore emotionally and conceptually responding to the recognition of our own limitations in space and time. Mortality and limitation are a shared human experience and I definitely found that in many traditional Chinese landscape paintings, as well as Western painters’ work, such as Caspar David Friedrich.

For the more contemporary aspects of the concept of the sublime, especially in our technological culture, one is constantly bombarded by information overload and the internet. Since we work so closely with so many machines everyday (smartphones, laptops, software, etc.), people are becoming more like machines; the call for an understanding of our humanness is becoming increasingly important. I really think the concept and experience of the sublime can really help us develop a better mindset about these challenges.

Since you singled out Caspar David Friedrich, are there any painting(s) of his that really shaped your thinking about the representation of landscape?

SYF: I somehow always come back to his work Wanderer above the Sea of Fog, where we see the back of a person confronted with the infinite scene of mountains and clouds in front of him. As the viewers of the painting, we are also seeing the landscape with him, at his eye level, which gives us the same experience.

Another western landscape painter I really like is J.M.W. Turner. His sites and depictions of water are often rendered with great emotion. Although the figures in his paintings Snow Storm: Hannibal and his army crossing the Alp are quite small, the presence of their fear is so vivid on the canvas. The painting provides this frozen moment in a crazy scene for us to contemplate concepts like death.

While both of the painters are technically very sound, they are also painting a lot more than what the materials of the environment look like, they are painting the way they relate to the beautiful, but also potentially deadly scenes for the viewers to experience. 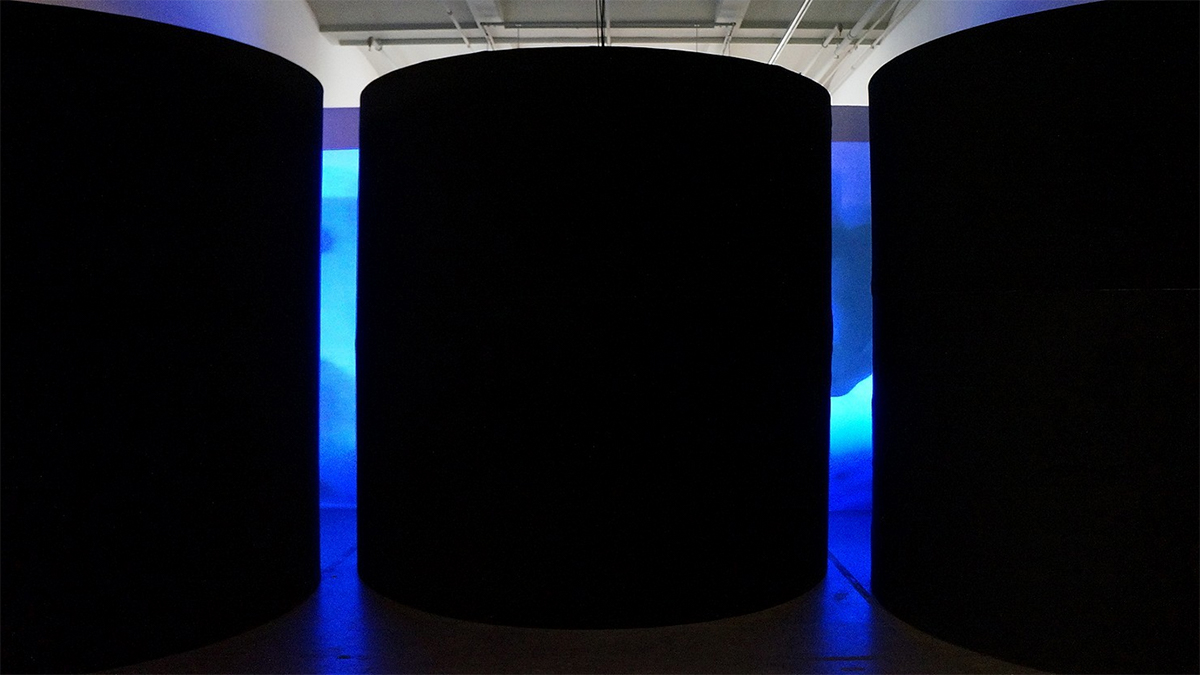 Many of your works use architecture to underscore unconventional aspect ratios, force particular views, and even obscure your graphics and animation. Can you talk a little about how this tendency developed and has evolved within your practice?

SYF: As I was getting deeper and deeper into working with 3D materials and digital space in my art, I sensed an ever-growing need for myself to “get back” to the physical world. It was as if my other senses and body parts are requiring to be used and more activated again.

On another end, I was also very frustrated with the limits of the screen such as the set monitor and projector aspect ratio and sizes, especially when presenting my digital work. I think coming from a painting background, I was used to having more choices. I felt this need to bring my digital work back into material space and then it was only natural for me to add on the sculptural elements, as framing for the digital work, or execute my artwork as installations.

The architectural structures are usually human-scaled, as the work is intended to be experienced not only with the eye but also by the body of the visitors. Within these installations, I see digital space as both a mirror to and a window out of the physical space they are presented in. 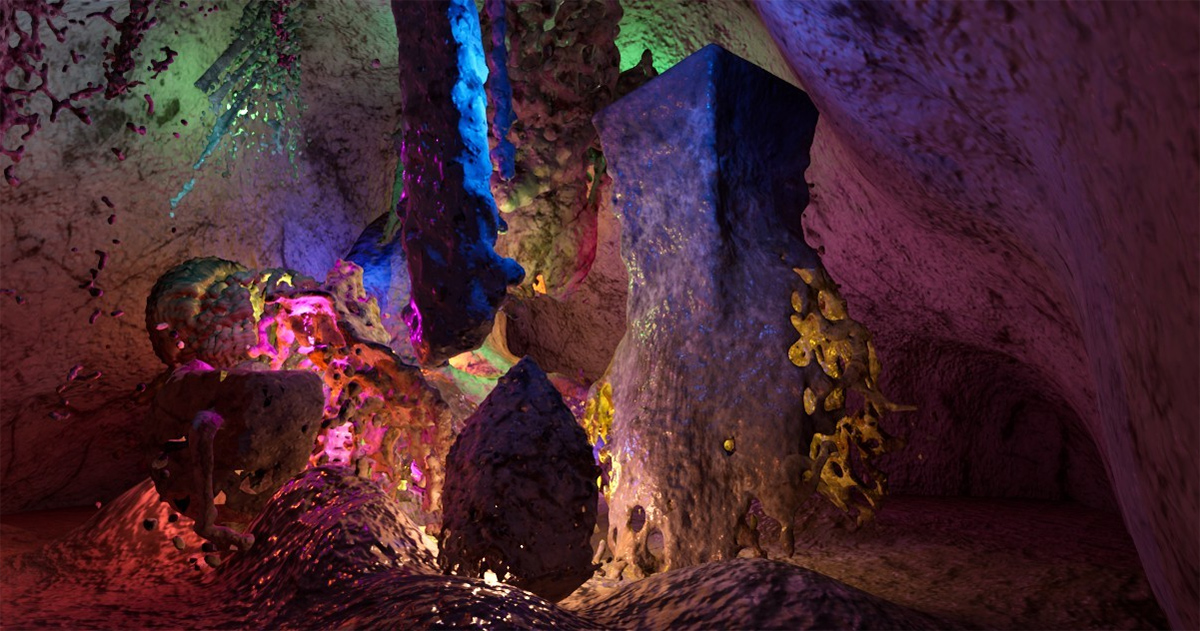 Your new work Karst is realized in VR rather than the video installation and projection contexts you often work in, what opportunities and challenges has this shift in medium presented?

SYF: I like the medium of VR for Karst mainly because of how the medium transports viewers’ bodies. The visuals and sound are referencing the caves I visited as a young girl in my hometown in Southwest China. I had such fond memories of them, because of their uniqueness and how they were often lit up with very colourful theatrical lighting. It is a very special kind of cave, as it took thousands of years the long stream of water both carved into the mountain and made it empty inside, but also accumulated natural rock formations from the minerals like calcium. Most recently, these types of caves have been used by the Chinese government to house data centres, because of their controlled environment and security, which inspired me to make the piece—making the space available to be seen and experienced by others.

The VR medium can provide the viewers an awareness of their body by seemingly transporting it into another space. In this case the viewer can teleport and visit the vast space inside of the Karst caves without having to purchase an airplane ticket and book a trip. By holding the controllers, the viewers will also be able to see wireframed 3D models of their hands in sync with their own movements, making their body digital as they experience the digitally construction—which is, both representational and abstracted.

I think VR is also just an exciting way of making work since it can directly translate the human sensorial experience into another scene. As everything inside of the headset is built relative to human scale, space can be created that is otherwise impossible, such as the view of a 60 foot tall cave ceiling you will find in Karst.

Given the opening of Karst is imminent and it sounds like you are genuinely excited about VR, what would your goal be, in terms of the experience of the viewer, for future works in the medium?

SYF: I think VR, like 3D, opens up a lot of new possibilities for art making. Besides Karst, I am currently developing another work in the medium that references my recent visit to a disappearing glacier. I am interested in using VR to be a way of recreating and documenting environments that are remote or restrictive to access in both time and space, and also to sculpt out a space for contemplation within an otherwise very spectacle driven medium.