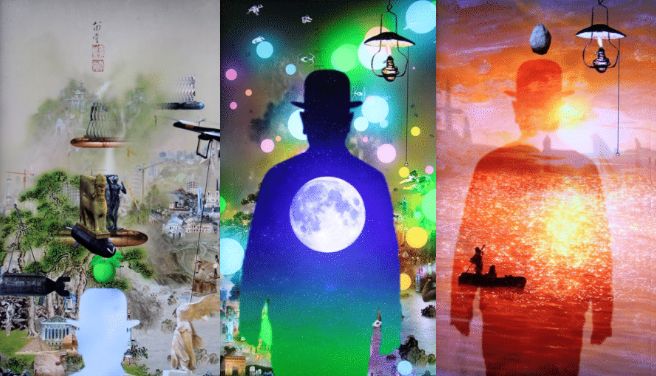 As with many of Lee Lee Nam’s works, Renaissance of Light uses a combination of digital media and traditional art to connect past and present, offering a critical perspective on contemporary life and image-making as well as visceral links between artforms and eras.

The work takes as a starting point two obscure works by 18th Century painter Kang Io, found in the Seoul National Museum. One of these works, Songhaman’s Fall, is seen at the beginning of Lee Lee Nam’s video piece; Kang’s tranquil waterfall is gradually infused with motifs, icons and images from other eras - bullets and missiles feature, as do elements of the work of Magritte,

Through this collaging of references, the work speaks of the intrusion and integration of external forms of power and the conflict of identity these cause. Underpinning this message is a study of light, as described here by the artist:

“Renaissance of Light reexamines light as a classic value, and questions human fundamentals and truth.The work offers food for thought: The "Renaissance of Light", is structured by the combined Chinese characters "Myeong (明)" meaning "light", symbolized by the opposition of the sun (日) and the moon (月).” - Lee Lee Nam

Renaissance of Light will open on 3 June with a socially distanced vernissage at ArtsKoCo, 5 rue Auguste Liesch L-1937 Luxembourg.