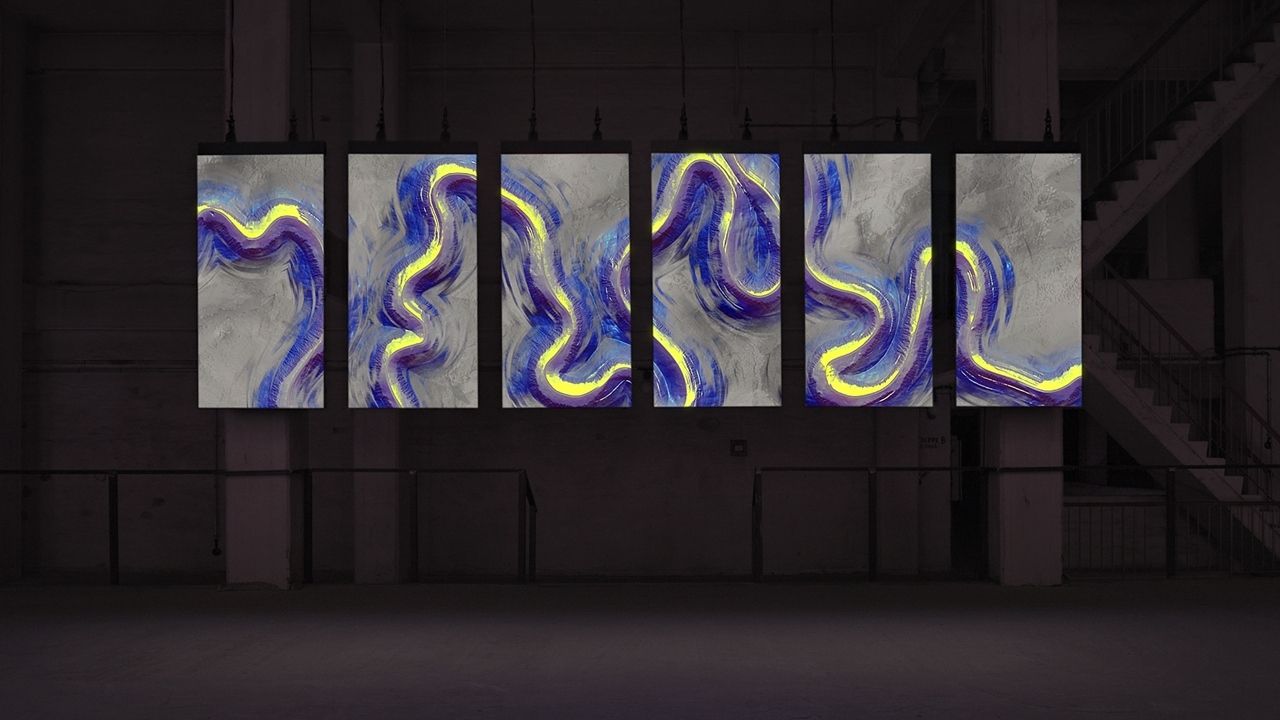 Founded by Julia Laub and Cedric Kiefer in 2010,

Onformative is a studio for digital art and design based in Berlin. Bridging kinetic sculpture, data visualization and sculpture, choreographic systems, and audiovisual installation, their interdisciplinary projects are at the forefront of computational aesthetics.

Onformative have shown work at the National Design & Craft Gallery Kilkenny, Design Museum (Shenzen), Akbank Art (Istanbul), and Ars Electronica (Linz). They also co-authored »Generative Gestaltung« in 2010, which remains one of the most comprehensive books on generative design to be published to date. Below, they speak in detail about Meandering River, an algorithmic river–landscape generator they developed in 2018, and the related edition of the project released through Sedition. 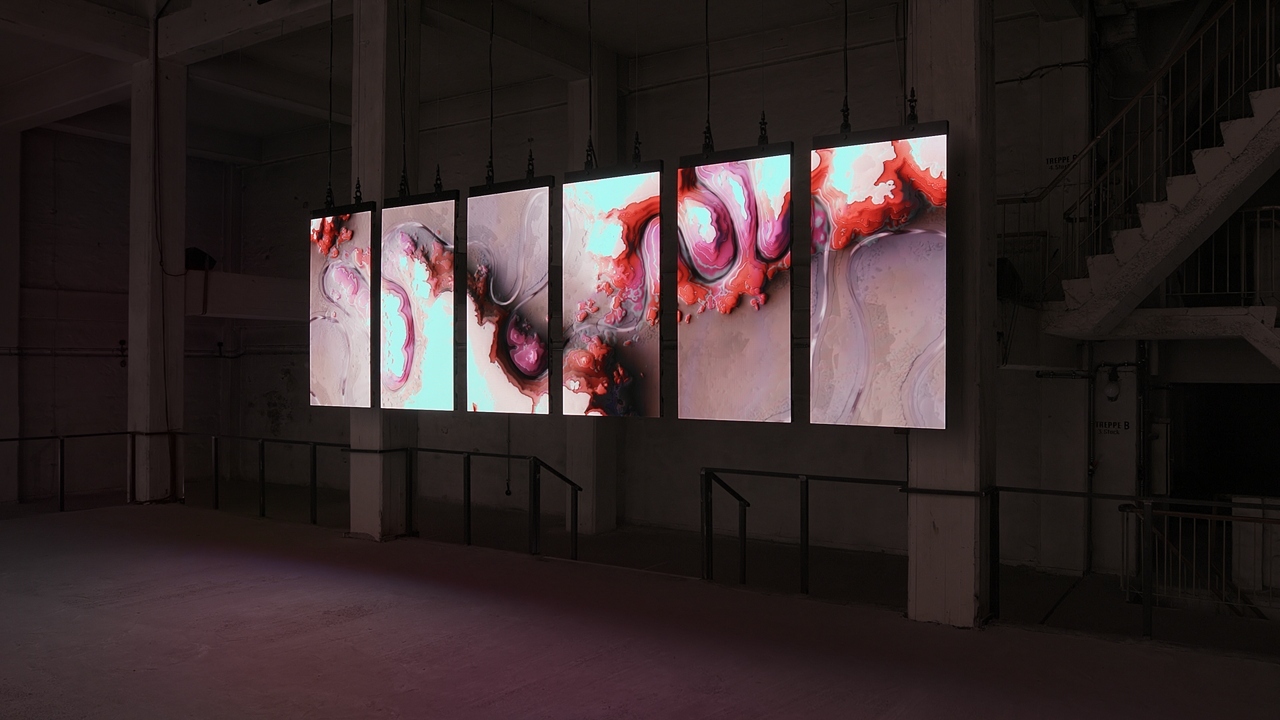 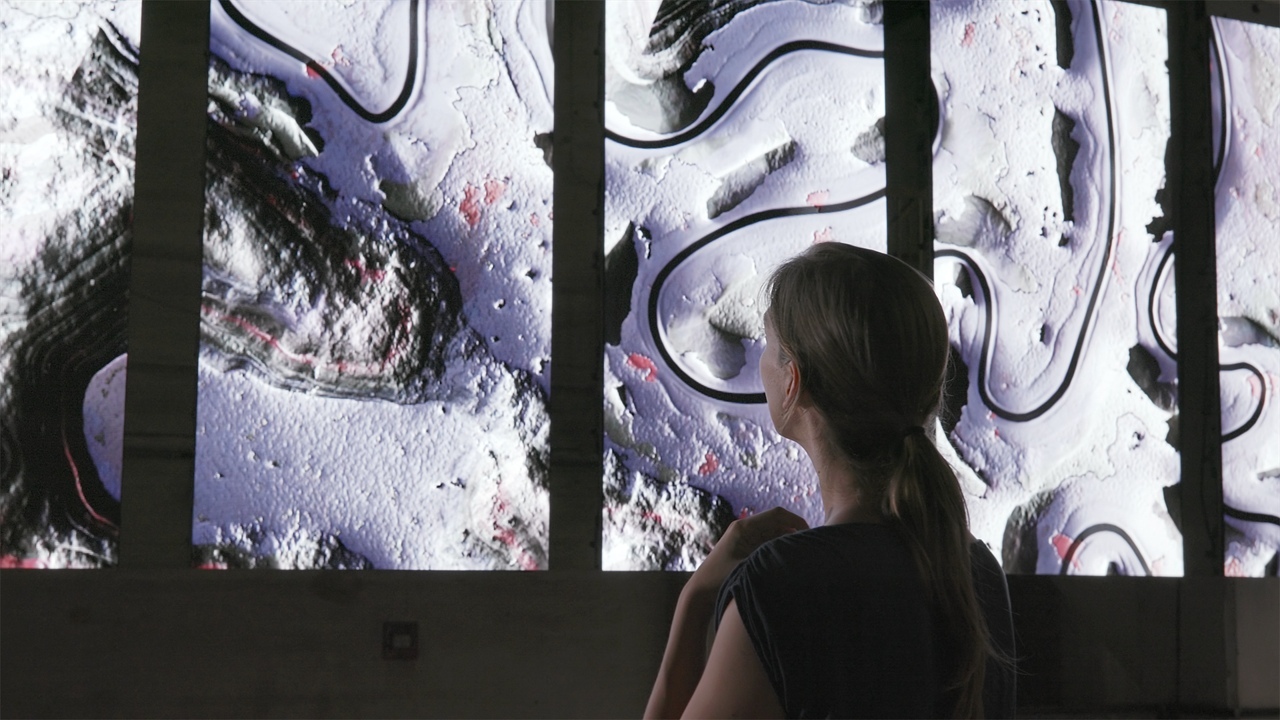 Meandering River takes a very poetic and process-based approach to representing how rivers shape the landscape. Are there any particular rivers, bodies of water, or landscapes that made an impression on you in your youth, or captured your imagination prior to the conception of (or during the execution of) this project?

onformative: Good question. There has actually not been any specific river or landscape we have been inspired by. What we continuously are intrigued by, is the shift of perspective with the help of technology to explore the relation between nature and technology and to challenge how we perceive it. With Meandering River, the initial idea was to use satellite photos as an inspiration, as we have been doing with our Google Faces project a couple of years ago, to zoom out and suggest another view of nature. The rivers, and especially their changing movement, serve as a beautiful base to display change in a new aesthetic way. As you say, it is about the process and how the natural flow gradually shapes the environment in a soft but assertive way.

How is the project an expression of your broader design philosophy?

o: We think DNA is a good metaphor—we had the intention to explore the relation between nature and technology, which both have DNA as a key component for creation. Here we basically utilized the natural behaviour of meandering rivers as the DNA to code our digital artwork. Based on a bespoke algorithm, the rippling and oscillating movement inherent in the generated imagery, provides a vantage point that transforms an understanding of progress. Thereby the shifting movements and rhythm of natural forces can be examined. The emerging patterns of Meandering River leave the viewer with a sense of the unpredictability of change, and the beauty of nature.

So, with this piece of art we translate from the real world to computer generated data and make change perceivable. We all live in a world of constant transformation, but we do not always notice it, only when we stop and zoom out can we discern the differences. With Meandering River we suggest a change of perspective based on the tension between nature as something unpredictable and technology as programmed and planned. And that is what our approach as onformative is about, to challenge these kind of relations and experiment with the way of perceiving them through technology and art.

How did you approach modelling the flow of rivers?

o: By investigating scientific research that examine the manifestation of meandering rivers, different algorithms were developed to simulate the unpredictable movements and reinterpret their organic structures, rhythmic fluctuations and visual materiality. The resulting graphics are based on a complex system emerging from different algorithms and shaders, which enables various interpretations and editions of the piece.

Satellite Image of the Mississippi Delta

Could you speak a little more about that rendering pipeline: which terrain or phenomena proved the most challenging to simulate?

o: The biggest challenge, we’d say, was the complexity of phenomena. We actually had to limit the number of natural influences we would simulate, as there are so many. We excluded the influence of rain or complex terrain properties for example. In the end we decided to focus on the river and its environment itself as we recognized it had the most aesthetic potential. Each landscape iteration is composed of multiple simulation, material, lighting and post-processing passes. Landscape modelling simulations were written in High Level Shading Language (HLSL) shaders and developed to run entirely on the GPU. They reproduce natural visual effects such as different terrain properties and elevation, hydraulic and thermal erosion, fluid and sediment transportation, oxbow lakes and meander scars. Finally, additional post-processing passes like surface materiality, vegetation and lighting enabled the final landscape compositions to reach the visual granularity and quality intended for the work. 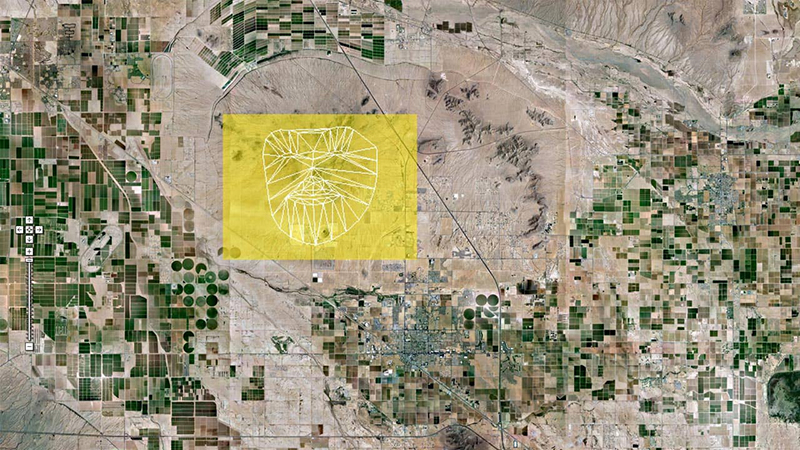 As you mentioned earlier, in your Google Faces (2013) project you tasked facial recognition algorithms with finding face-like details in satellite photography, and here you are, still exploring that medium What is it about it that continues to inspire you?

o: Since we are extremely interested in change and transformation as a subject for our art, satellite photos are a particularly inspiring and visually appealing base to start with. Analyzing pictures of the earth’s surface is a great way to find ways to reinterpret nature into digital art and make otherwise invisible phenomenons appear. It is the same principle as using macro photography, for example, where we zoom in to discover something completely new. Taken out of the context, there are a million ways to rediscover a small section of a bigger object. The change of perspective enables us to open up a to a new way of observing. With Google Faces there is an obvious intention to project the human in nature through technology; Meandering River is all about visualizing change and enabling the discovery of our relation to nature and with the help of technology. 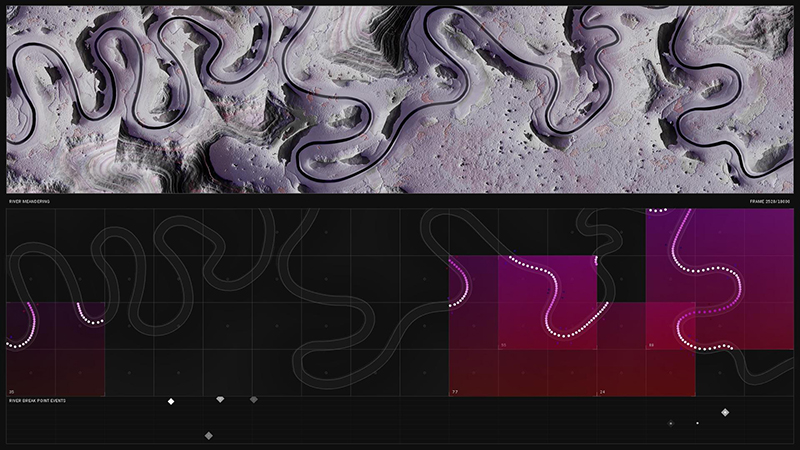 Another component of the installation is emergent—its musical score was composed by an AI. How does it complement the piece?

o: The musical score was developed in collaboration with kling klang klong guided by the intention to enhance the emotional, complex and unpredictable nature of the visual aesthetic. Through a research of various computational strategies, the musical composition was created using the Google Magenta Performance RNN learning model and a custom-built procedural system, based on the output of the visual river simulation. As a result of an iterative process using machine learning, the machine achieved the composition of an original musical score whose harmonic quality reached the standard expected from a human composer and a rich cinematic connection between the visuals and the music. Thereby, the music concept complements the visual part of the piece in exploring the relation between nature and technology.

How does the new edition of the work you’re releasing on Sedition reflect the evolution of the project?

o: One important message we have with this piece of art, is the perception of change as an essential subject, we regard it as very suitable and important to make the process of creating the art itself part of the artwork; it is just as dynamic as the outcome itself. That is why the system and the technical background, which brings this artwork to live, is a vital part of the process and should receive special attention. The special edition we share here with Sedition is a more picturesque interpretation, which leaves the visual connection to the natural phenomena a bit more behind and interprets it in a more discrete way, by focusing on the motion and change happening over time. 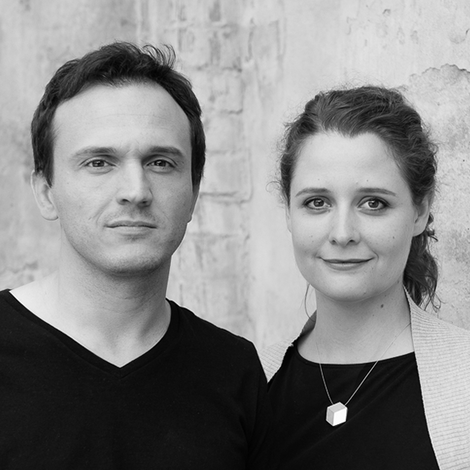