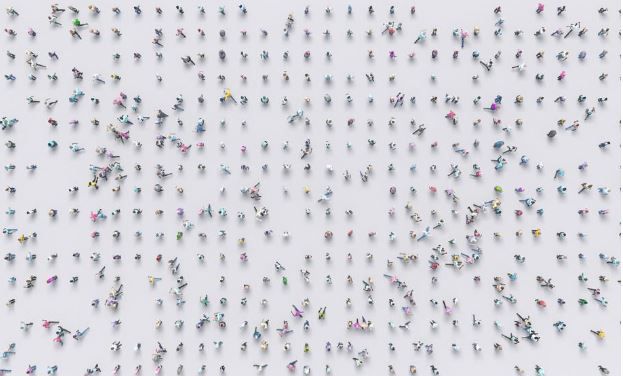 Universal Everything have released a teaser for an ambitious new project which visualises the behaviour of humans in crowds. Tribes shows a drone's eye view of thousands of tiny people moving in and out of sync, forming patterns which are at once soothing and challenging in their crossing of the boundary between life and simulation.

The Tribes project offers an unusual perspective on human life, similar to that experienced by astronauts when they flew out of the Earth’s atmosphere. Rather than being the centre of the universe, humans are simply blocks in a pattern, or shading in a drawing. Rather than being the purveyors of sense and logic, humans are parts in a system with its own momentum and its own laws.

With Tribes, Universal Everything seek to produce an alluring and thought provoking piece which offers a micro view on a macro subject. Human behaviour is the focus of intense scrutiny by psychologists, marketers and critical theorists. The mass movement of people has implications which individual people cannot see, but which can be analysed at a distance, understood in some form, and utilised. A population seen through a software is reminiscent of bacteria in a petri dish, forming clusters, waves and patches. Tribes is a celebration of complex movement and the emergence of order from chaos.

‘The aerial viewpoint lends itself to a flat display surface, giving the viewer a sense of grandeur and scale as they observe mass crowd behaviours as if from above. Hopefully this perspective will encourage viewers to consider how people in a common space connect, and the ways in which the movements or actions of both individuals and groups can have knock-on effects on those of others around them.’

The first full screening of the Tribes project will take place at Universal Everything’s solo exhibition at Borusan Contemporary, Istanbul, in September 2018.