Above: Beyond the Infinite by Doug Foster 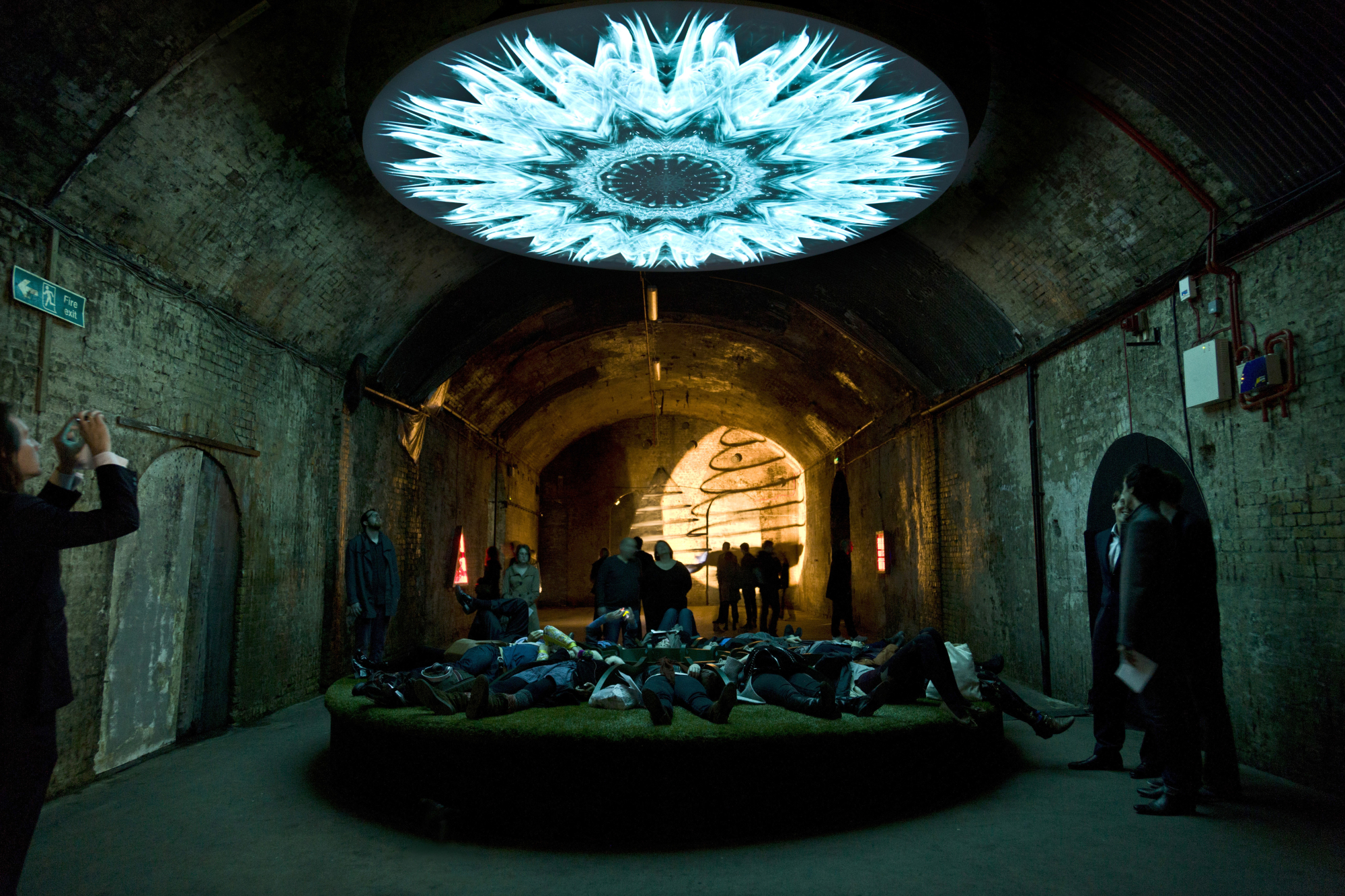 The Psychotron at Bedlam, The Old Vic Tunnels

A stunning artwork collection by 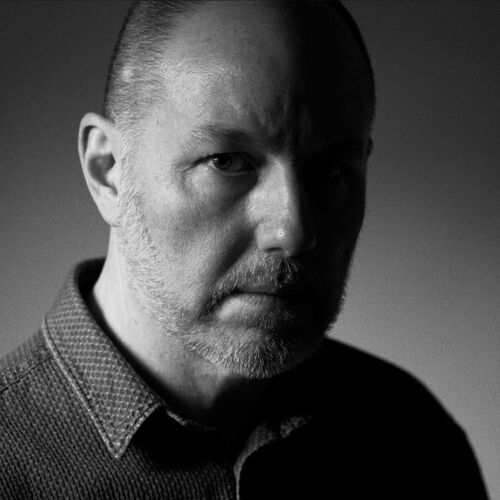 Doug Foster; The Psychotron has just been released on Sedition. Taking inspiration from circular figures such as the mandala, the yantra and symbols of various chakras, the meditative aspect of the works are in presence with Foster's meticulous approach on the making of digital film installation The Psychotron which is a giant, ceiling mounted kaleidoscope of liquid light that engulfs its recumbent audience, who lie on a circular platform that is upholstered with soft artificial grass. The work originally shown at Lazarides’ 2012 Bedlam exhibition in The Old Vic Tunnels and also made an appearance at the Glastonbury Festival in 2014. 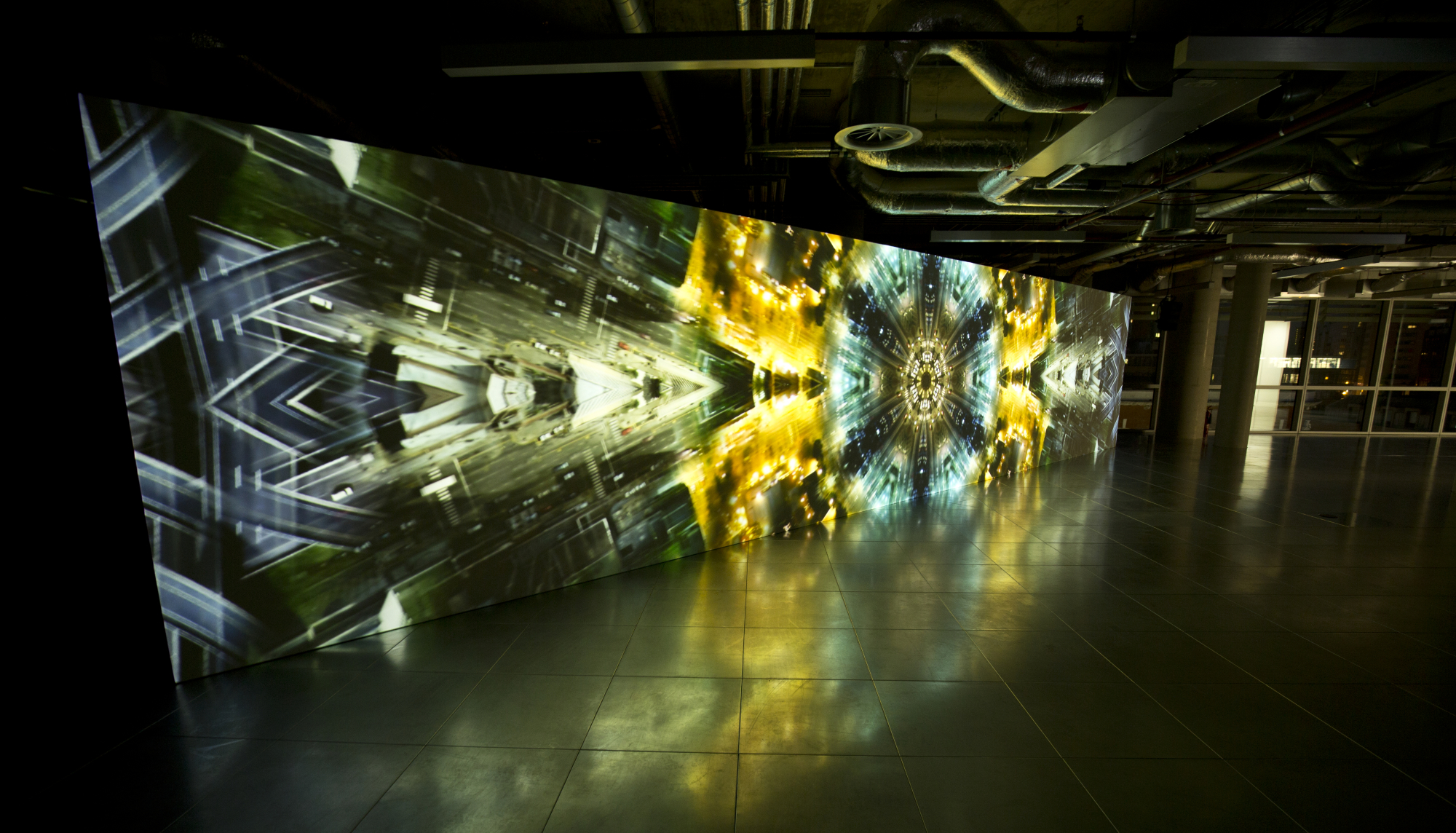 Islands of the Blessed at Aldgate East 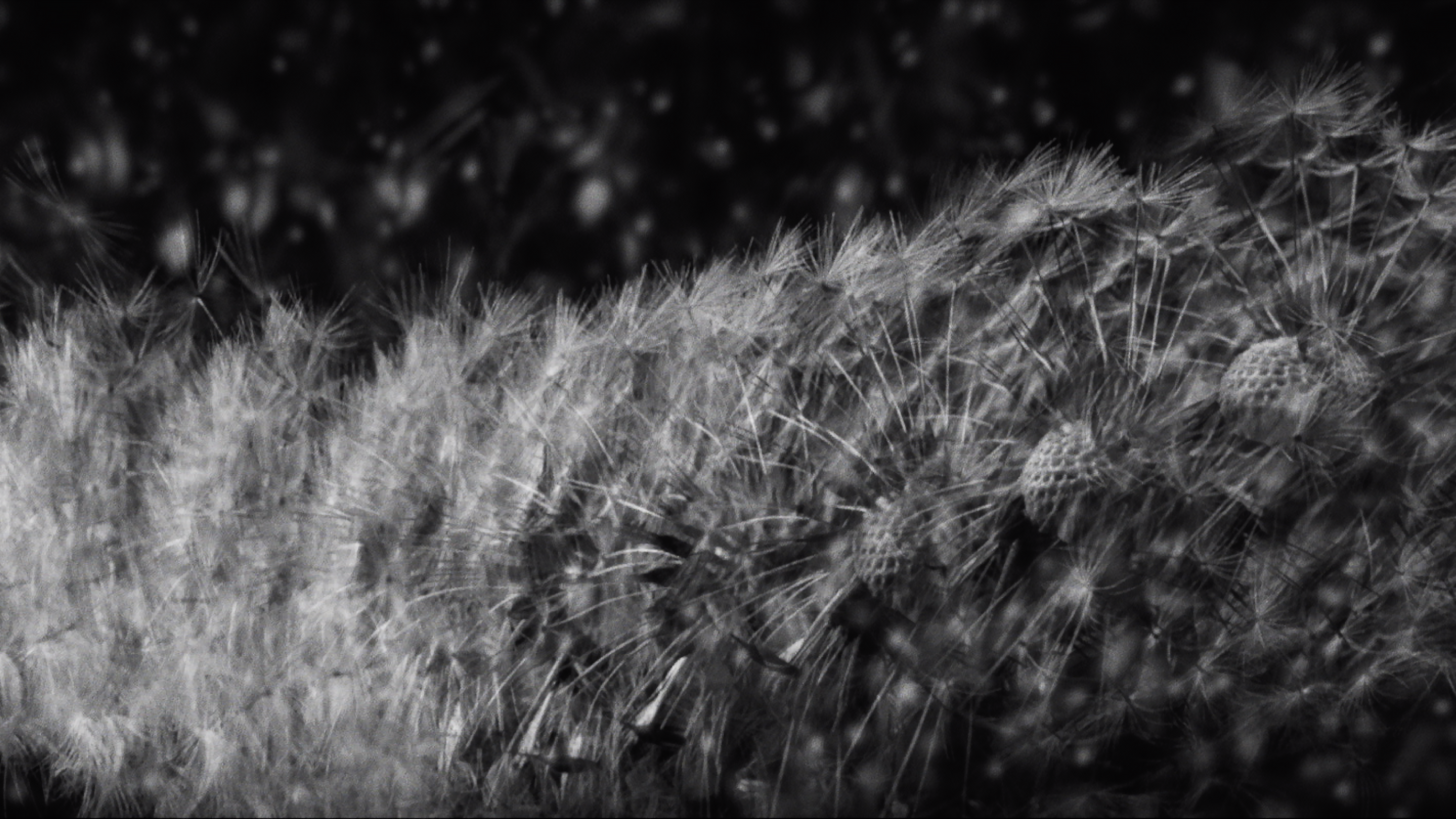 Moonland at Brutal, 100 The Strand

Repeating spatial patterns and cyclical movements are central in some of your works such as Fortuna’s Wheel, Moonland and the Weaver series, and they add a meditative aspect to your works. The works from Sanctuary Spaces also invite viewers to a kind of transcendental, meditative experience. Could you please tell us a bit about this aspect of your work and some of the recurring themes in your work?

Doug Foster: Fortuna’s Wheel, Moonland and the Weaver films are designed to invoke a calming influence on their audience. The compositions feature meticulously filmed sequences of revolving textural imagery, featuring plants, liquids and distorting glass. These elements are entwined into three dimensional forms that are repeated with a temporal offset so that they gently pulsate at the rate of a resting human heartbeat. The Heretics’ Gate and Chimera use symmetrical, ectoplasmic forms to conjure up imaginary creatures and strange anatomy, like a transmogrifying Rorschach inkblot test. Their tall, arched screens and large reflecting pools also help to transform the rooms that the works occupy into sanctuary spaces for quiet contemplation. My ambition for all of these works is that they provide a brief respite from the stress inducing overload of extraneous information that we are all subjected to every day.

Chimera at The Minotaur, The Old Vic Tunnels

Could you name some of your favourite photographers or filmmakers who made an impact on your practice?

Doug Foster: The filmmakers who most influenced me early on were the ones who built extraordinary, but persuasive, versions of the world within their films. David Lynch’s Eraserhead, Ridley Scott’s Alien / Bladerunner, Wim Wenders’ Wings of Desire and Jean-Pierre Jeunet & Marc Caro’s Delicatessen spring to mind as enthralling cinematic experiences that have informed my approach to lighting and art direction ever since.

What are the specific research areas that you’re interested in lately?

Doug Foster: I have an ongoing fascination with the workings of the Human Visual System and how it turns two tiny images, projected onto the back of our eyeballs, into the stereoscopic, high-definition experience that we call sight. We can only detect detail and colour with a small patch of receptors in the centre of each of our retinas, our brains have to use a lot of processing power to generate an animated, three-dimensional model of the world around us from the meagre information provided by our eyeballs. The task is so large that our brains have to resort to shortcuts and guesswork to keep up. With knowledge of how the system works, video artworks can be made to exploit this fallibility by creating optical illusions that literally challenge our perceptions. 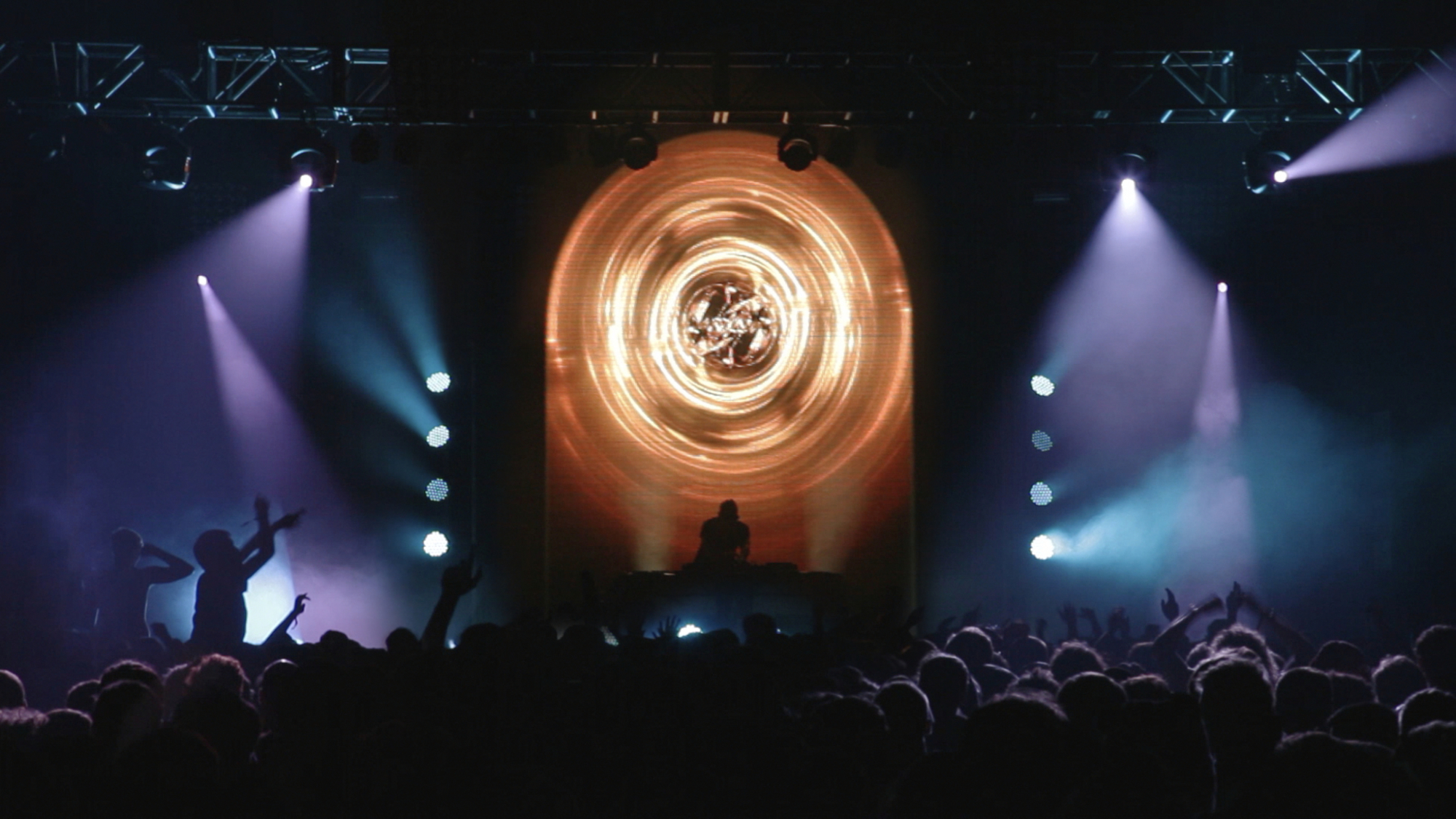 What’s the role of music in your practice? You’ve collaborated with James Lavelle many times and created imagery for UNKLE’s audio-visual DJ experience. Are you planning to make any other collaborations with other musicians or artists?

Doug Foster: The soundscape of a film installation is just as important as the imagery. This is especially so in my works, as the visuals that I create are often rhythmic and lend themselves to synchronisation with music. Sometimes I layer and repeat sound recorded from an environment in the same way that I construct my visual compositions. I’m no musician, but I enjoy the process and appreciate having the ability to craft the soundtrack at my own pace while I’m editing the imagery. The UNKLE Sounds world tour provided me with an exciting opportunity to accompany a variety of James’ best known tracks with abstract imagery. Even though the performance was live, it was possible to synchronise the visuals to the music perfectly, which made the resultant show all the more powerful and affecting. I plan to make a ‘kind of’ dance film in the future which will require the collaboration of some innovative dancers and an experimental music maker.

Are there any specific patterns or visual elements that inspire you or you see as a reference point aesthetically or conceptually?

Doug Foster: Almost all mobile animals are bilaterally symmetrical: having a front and a back and an equal number of limbs on each side. This makes efficient mobility easier to achieve. As humans, we have an inherent attraction to bilateral symmetry, such as that displayed in a human face or body, probably because good symmetry is an indication of healthy genes. I’ve exploited this visceral response to create film installations such as The Heretics’ Gate and Chimera which aim to engage by simulating living entities. Radial symmetry also appeals to people, maybe for similar reasons. I’ve made several films that use kaleidoscopic arrangements or radial repetition to focus a visual composition on the centre of the screen. This allows the imagery to be both dynamic and anchored at the same time.

The Floating City revolves around a city setting exploring Venice and its unique canal network. How did you come up with this project?

Doug Foster: Visiting Venice is like going back in time. With The Floating City I wanted to make an affectionate portrait of this fragile, slowly sinking museum of a city in all its crumbling beauty. The undulating motion of the buildings is an attempt to accentuate the vulnerability of the architecture, as if it were floating in the Venetian Lagoon like a giant raft of driftwood that may break apart at any moment. City of Water is a more vibrant look at life on Venice’s picturesque waterways, the assortment of specialised boats that churn the canals and the beautiful patterns of reflections that they create in the water. I wanted the film to look like a sequence of living paintings. Each scene is carefully composed and the camera is static so that the intricacy of the motion within the frame can be appreciated.

City of Water by Doug Foster

Could you tell us about your future projects? What ideas or concepts are you planning to explore in your future works?

Doug Foster: I hope to be working on a couple of interesting, large-scale shows that will open next year, one in London and one in Hong Kong. Unfortunately, I can’t talk about either at the moment, except to say that both projects will be somewhat different to my previous work.

Interview: Studio Above & Below

The (Un)Holy Trinity at Art in Flux: Radical Embodiment in Barbican