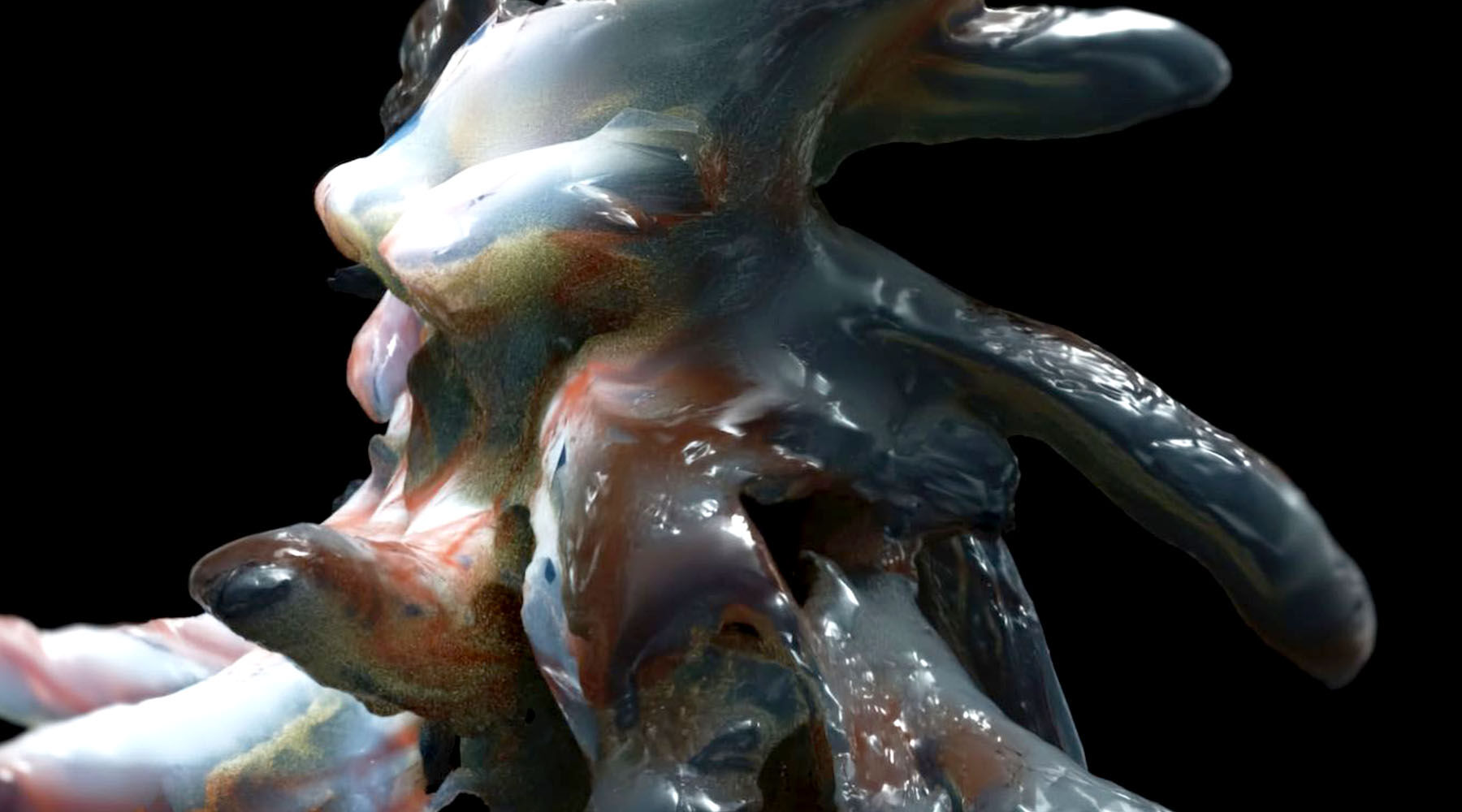 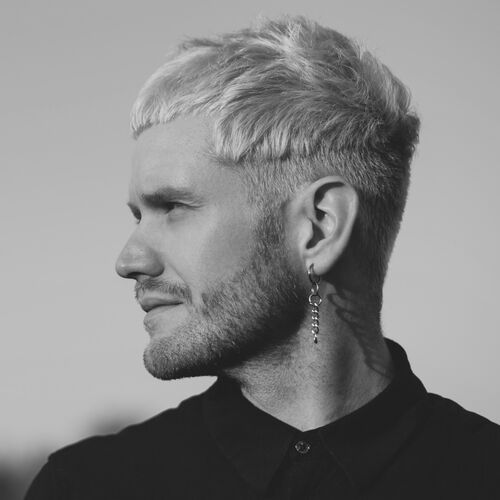 Herwig Scherabon is an award-winning Austrian artist currently based in Berlin. It is not surprising that peculiar organic forms and representations of nature are often found in his work. Scherabon’s creative practice involves a specific focus on digital interpretations of nature and sublime phenomena. Processing cartographic data and using 3D scans, the artist delivers multi-sensory experiences through videos, audiovisual installations, Virtual Reality and CGI.

For the artist’s first launch on Sedition, we had a chance to ask Scherabon to say hello to the Sedition community and explain his practices.

Sedition: Can you introduce yourself briefly to Sedition’s Audience?

Herwig Scherabon: My name is Herwig Scherabon, I am a media artist from Austria working with immersive audiovisual installations. My main interest is in ecology and the relationship we have we our surroundings — sentient as well as non-sentient. Environment plays an essential role in this because it is ontologically speaking something that is different from the self, as it surrounds (“environs”) us.

Also, non-human life forms and the idea of a non-hierarchical, flat ontology are important factors, since I believe that we humans have to learn different ways of looking when it comes to the value of non-human life. Digital media and their immersive qualities, therefore, play an important role for me in capturing sublime phenomena and creating experiences with a transcending potential. 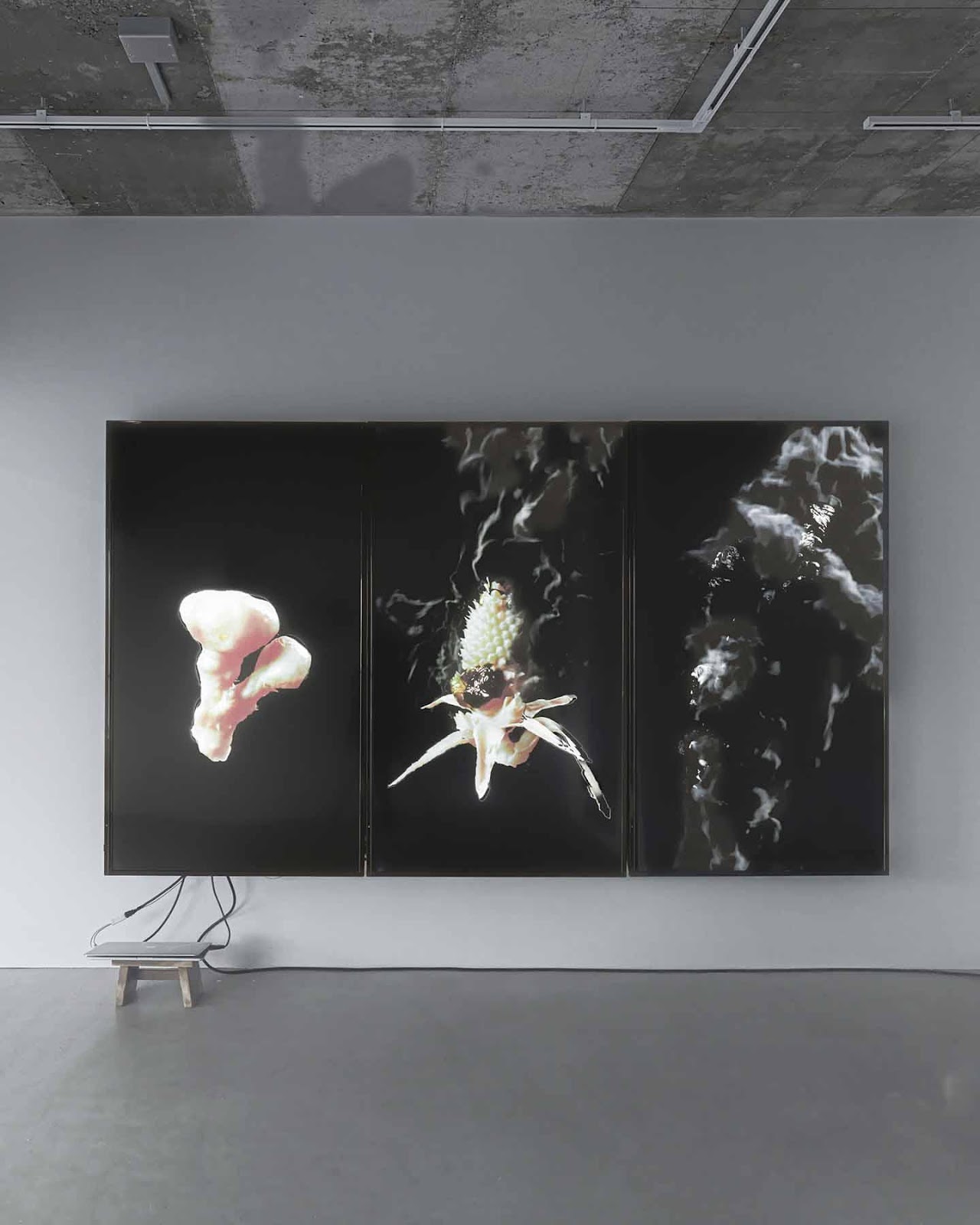 The Earth Will Spin Yet We Won’t Be Here  the 5th Floor in Tokyo Photo Credit: Jukan Tateisi @scherabon.com

Sedition: Can you give us some background, and ideas behind your artworks, The Deep Scattering Layer, recently launched with Sedition?

HS: The Deep Scattering Layer came out of a research trip to the Amazon Rainforest where I was 3D scanning the environment, different plants and roots. Based on these captured, frozen “holographs”. I started playing with the idea of bringing them to live with gaming technologies – therefore seemingly giving them agency – agency might be a fairly new term in western philosophy but has been around in indigenous tales as the eon old idea of spirits.

The series is meant to be viewed in an installation with a set of screens in portrait format giving them a frame that almost holds these creatures like a cage, while they are slowly walking toward the viewer. It is an artwork that captures a lot of the ideas I have been playing with in the last few years, as it very explicitly addresses the notion of the aliveness of our surroundings. 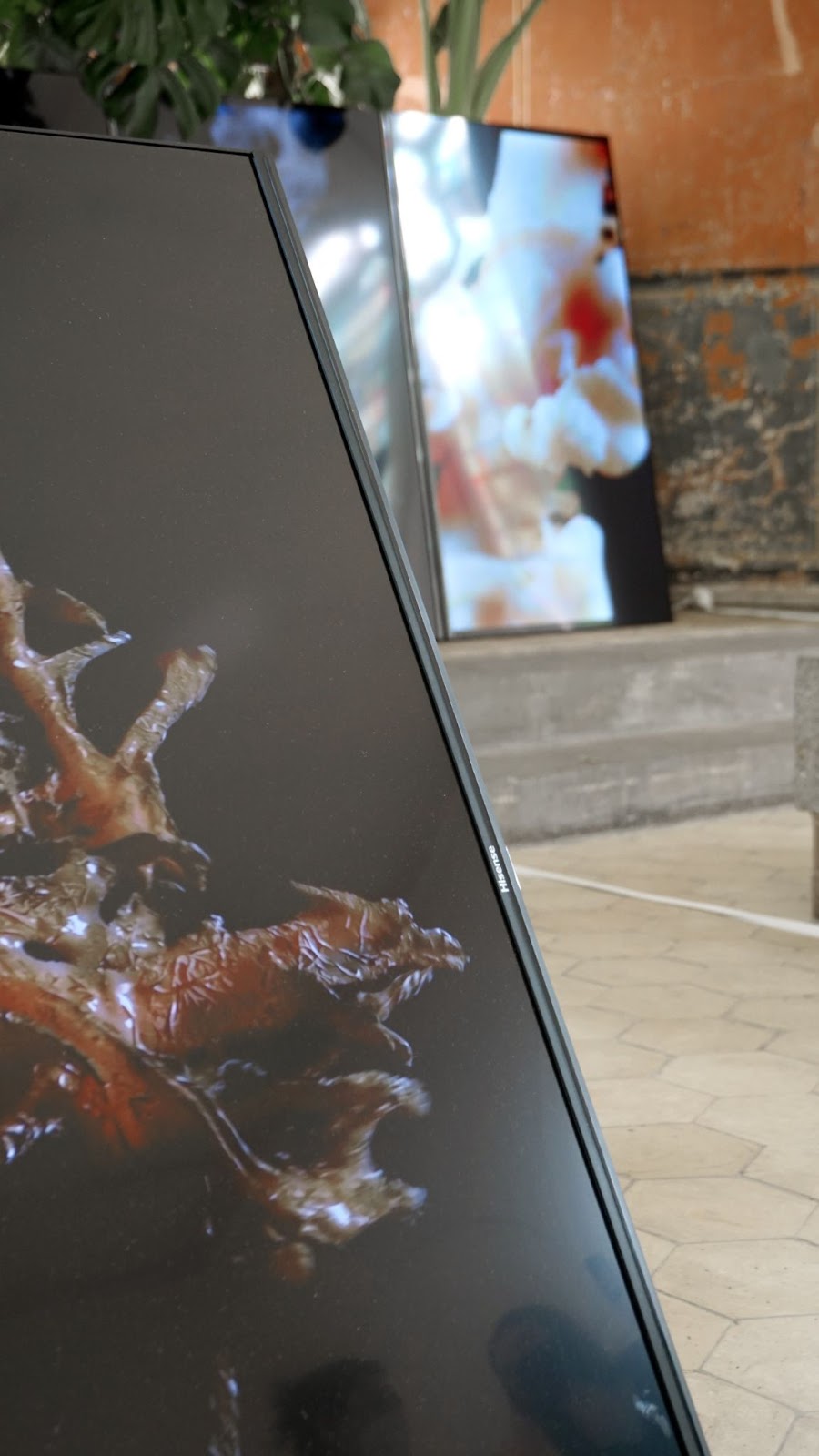 The Deep Scattering Layer at re:publica 2022

Sedition: Many of your works deal with nature, non-humans and organic forms. How did you start investigating these topics, and why this is an important area for your creation?

HS: For me personally, the interest comes out of growing up in a protected nature area in Austria. The impact of extremely open space on our understanding of the world and the idea that our environment is in a sense alive, animated so to speak, has always been with me.

More broadly speaking I believe that we live in a world of an already ongoing ecological collapse. When I was working as a data visualiser before becoming an artist I tried to create awareness by pointing to facts. However, I came to understand that in order to create change we need to learn to see reality in different ways first. Creating more data in an already saturated world of information does not change anything. As a species, we have to put a lot more effort into familiarising ourselves more with the so called “other”. We are used to looking at nature as something that is encased in protected areas, different and separate from us, while in fact, it pervades everything — even our bodies and the cities we live in. I think that experiences of this “other” and experiences of sublime landscapes have the potential of transcending us from our anthropocentric view of the world.

Sedition: Philosophical ideas like dualism or phenomenology, are often referred to with your projects. Can you share more about your research process and how you visualise this idea?

HS: My work is heavily based on contemporary philosophy, most prominently Timothy Morton’s idea of ecology and some later writings by Mark Fisher. A non-anthropocentric understanding of the world, post-humanism as it used to be called, is present in all of my work. More importantly, though I am starting to investigate the idea of subjective realism and its blurring of the dichotomy between object and subject. This is moving away from correlationism and continental philosophy, meaning that we start to understand the self as less separate from the objects around it and that the human self is being put in the same box as any other entity.

I think that these concepts may sound simple or a bit too abstract to some but on a deeper level, they require a lot of reflecting to really be ingested into our sense of reality. Through experiences that ideally involve more than one sense sphere, it is possible to activate an understanding that is beyond mere semiotics, which is our default mode of accessing information. By slowing down the tempo and often looping the videos I want to create a contemplative experience that allows for deeper understandings to take place.

Another important aspect is the uncanny valley between recognisable form and fictional dreamscape that is present in my art. I think that in order to truly understand the otherness and weirdness of things we need to familiarise ourselves with them. By creating artworks with a sense of horror and fascination at the same time, I am inviting the viewer to become more intimate with this otherness. 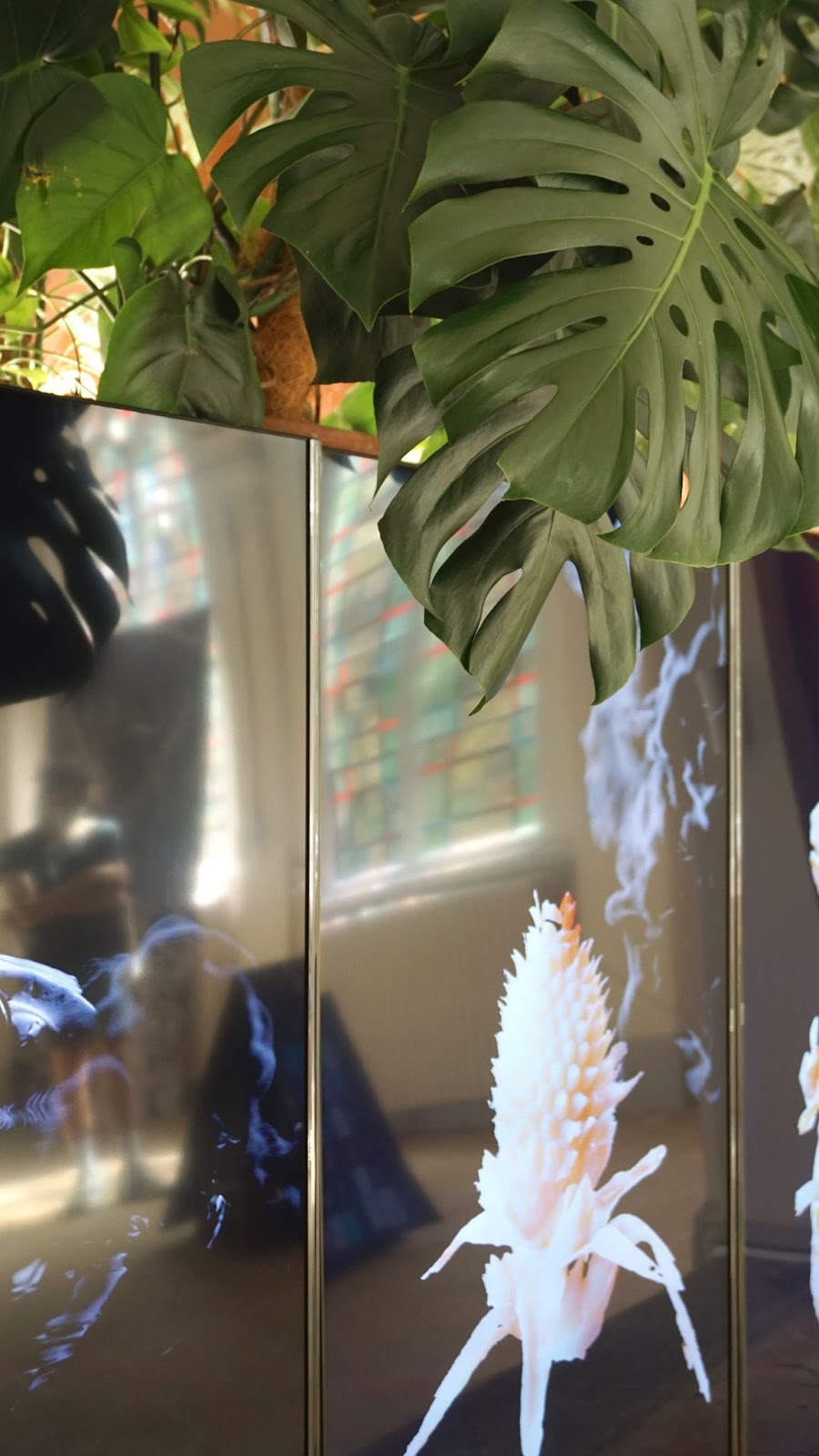 The Earth Will Spin Yet We Won’t Be Here at Against Nature @scherabon.com

﻿Sedition: You’ve been presenting the works as installations as well. When I see the installation settings, it almost feels like you are making a sort of ecosystem with digital natural plants and creatures. Do you have any specific strategies or approaches when you display them in a physical space?

HS: My artworks are made for spatial installations in a real setting where they have a more immersive impact than just on the screen. I often try to design these installations in a sort of semi-sacral setting with enough time and space for the viewer to think and reflect on what they are experiencing – hoping to do my part in spreading the above-mentioned new forms of experiencing the world.

I also try to play with the object and viewer relationship for instance by placing plants in the exhibition as co-existing viewers, or by placing screens at a specific height alongside plants. In my work, there is a strong emphasis on objects and environments and I sometimes like to mix those up. For instance, in my latest work for the Thailand Biennale, I had an enclosed terrarium as an ecosystem symbolising the idea of a world but placed very prominently as an inert object in the installation. While at the same time the projections created a very wide angled surrounding and therefore the illusion of open space. 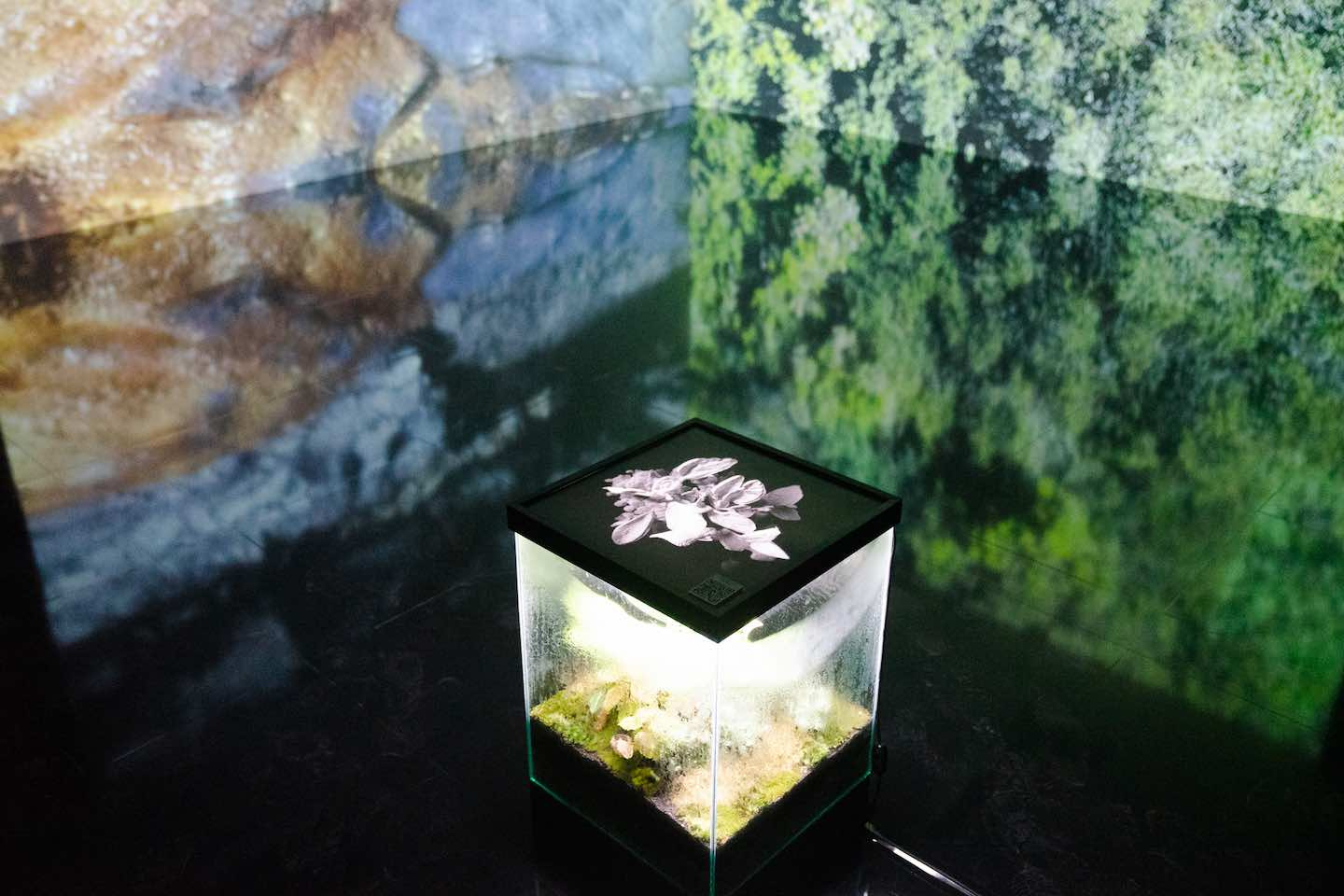 Not Really Now Not Anymore at Thailand Biennale Korat 2021 @Scherabon.com

Sedition: Please share some news or upcoming projects you are working on :)

HS: At the moment I am preparing a live performance with the Berlin-based Choreographer, Tanja Saban, about the idea of humans relating to their environment. The performance “Seismic” will be featured at a show in Berlin called “The Sensation of Biting Into a Peach And Letting The Juice Run Down Your Chin” opening on September 14th. Along with it, I will be presenting a 3-channel audiovisual installation called “Seismic Memories in a Field of Shifting Gravity”. Both artworks heavily relate to the ideas mentioned above.

In October I will be present at Karachi Biennale in Pakistan, with work on the impossibility of cities. The work Remembering You the City of Lights takes a view of a massively expanding urban space through the lens of deep time. A sort of fake archaeology will provide a distant look at reality from a hypothetical future looking back in time and looking at the remnants of civilisation.