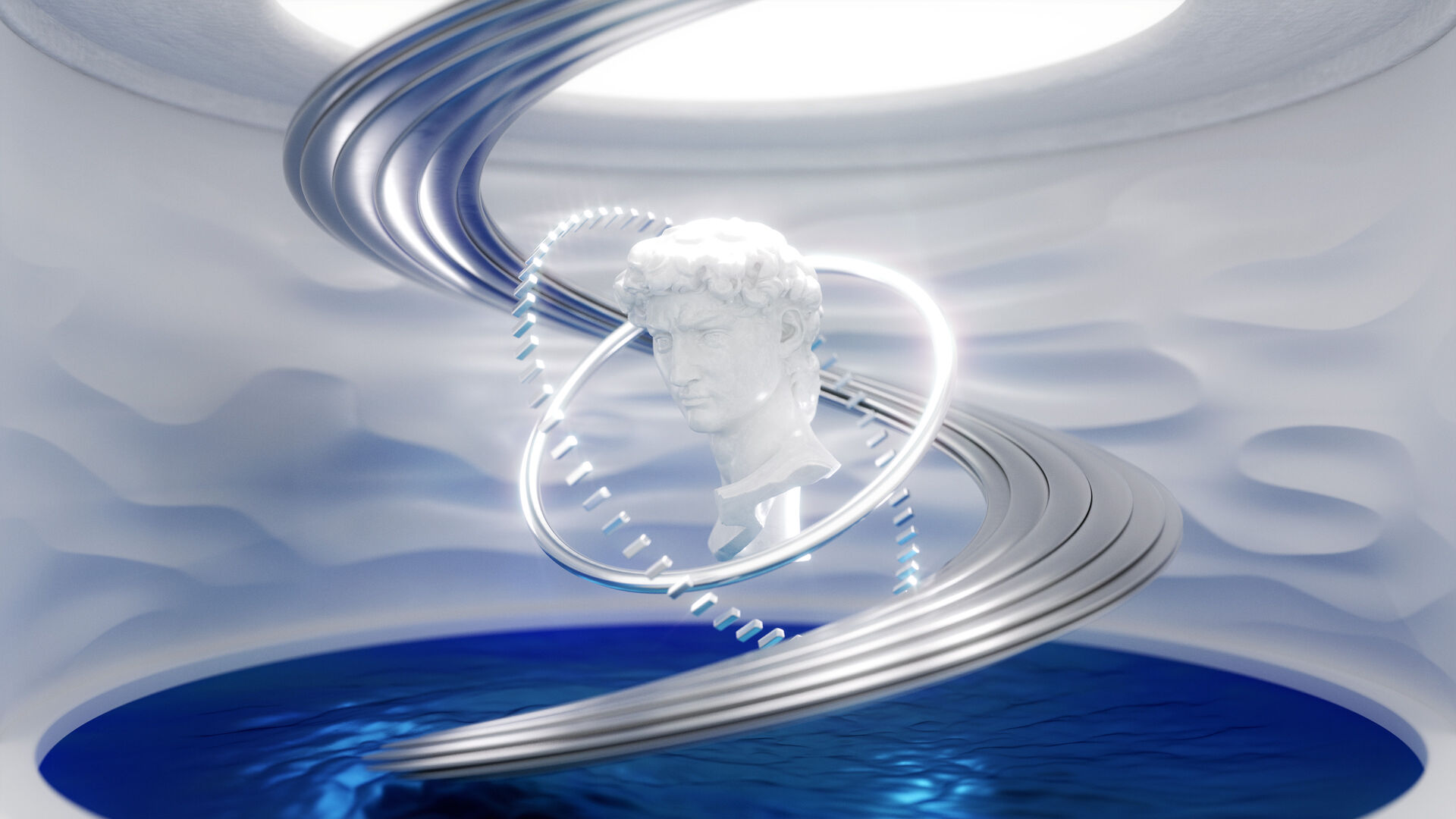 This October, Sedition will present the first part of an exclusive project Métiers d'Art in collaboration with 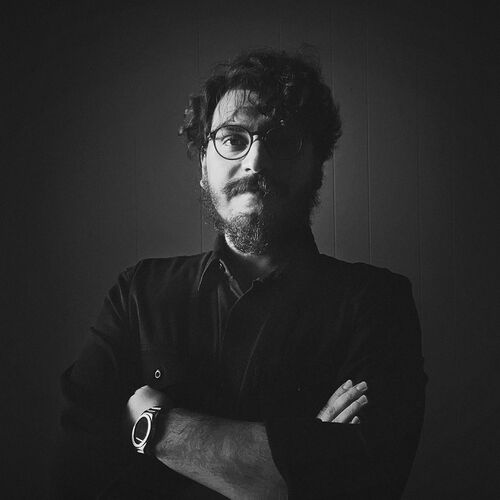 Can Büyükberber and one of Sedition's collectors Russ Rosenzweig, CEO of Round Table Group, which provides expert witness services to attorneys, and founder of the non-profit Literary Arts Foundation. The project marries the creative genius of Can Büyükberber with the celebrated artistry of Montblanc pens.

Russ Rosenzweig's forthcoming book, The Scholar’s Treasure, recounts the exploits of the founding of the company and the accidental launch of a brand new industry, expert witness search and referral. The book describes three decades of collaboration between leading professors and elite litigation attorneys, the unexpected growth of Round Table Group, its acquisition by a public company, and the re-acquisition of the company by the original founders in 2019. The Scholar’s Treasure is also an actual collection of objets d’art in homage to the very professors and lawyers that so graciously allowed Round Table Group to exist and to flourish. Lawyers and scholars are among a rare breed of writers who still use fountain pens, and the collection includes one of the largest compilations of rare and exquisite Montblanc “high artistry” pens, along with signed books and other artworks associated with the pens. The collection, in an unusual twist, also includes newly commissioned works of digital art and NFTs that pay homage to the pens and the artists, literary masters, and historical events that inspired the creation of the pens by Montblanc.

Métiers d'Art Collection: Phase I consists of 3 pieces celebrating the cultural history of mankind, literary figures and craftsmanship; Michelangelo 96 as an homage to Michelangelo, the Master of Marble, Spider Metamorphosis 88 featuring a web-weaving spider referencing E. B. White's novel Charlotte's Web, and Great Wall 333 as a tribute to Ancient China and Chinese mythology. Each piece encapsulates the essence of Montblanc's Heritage, Artisan and High Artistry pens.The digital pieces will be available both as NFTs and as digital editions for all collectors.

The edition size of the new works in Métiers d'Art; Michelangelo 96, Spider Metamorphosis 88 and Great Wall 333, matches the edition sizes of each Montblanc pens. Paired with the limited-edition Montblanc pens, signed copies of the books that inspired the design and the physical prints of the digital artworks signed by Büyükberber, along with Edition #1 of its related artwork will be auctioned on Sedition by the end of 2022.

Repetitive forms, physics and futurism are central components of Can Büyükberber’s works. Interested in building captivating and abstract universes, Büyükberber often blurs the sense of scale and presence in physical and digital environments in his works. Often presented in their physical forms as sculptures and kinetic installations, his animated works on Sedition, Noumenon 02, and the Luminous collection provides poetic and meditative audio-visual sessions for the audience.

Luminous I, II & III, Can Büyükberber 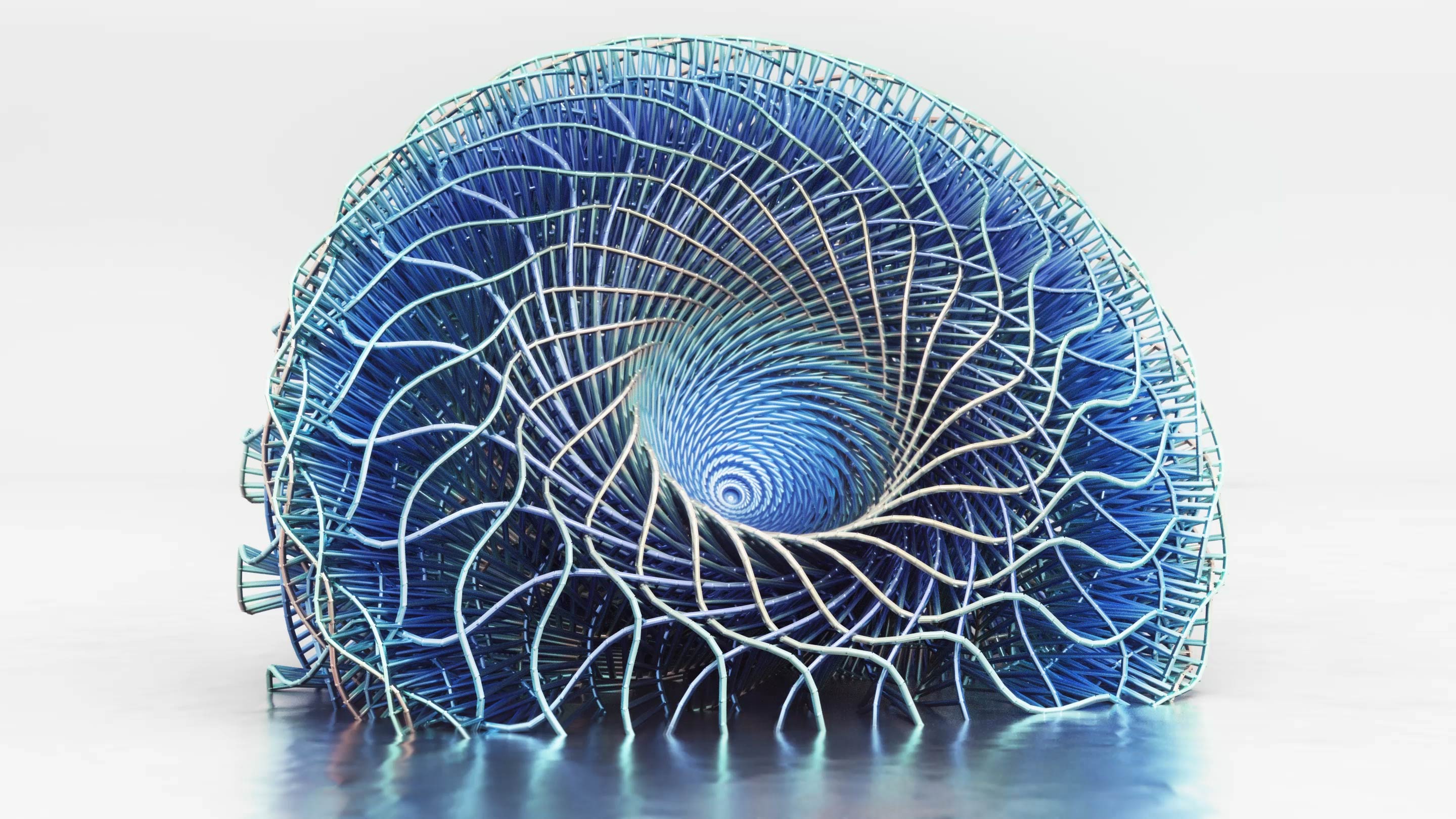 Created through multilayered references and inspirations from art, architecture and history, we are excited to present the works in Büyükberber's new digital collection, each created specifically for the limited-edition pens. The auction will feature the very first edition of each artwork, paired with the actual pens and the original, signed books along with signed artwork prints by the artist. The Spider Metamorphosis Limited Edition 88 Rouge et Noir pen will be paired with a rare signed first edition copy of Charlotte’s Web by EB White; a signed piece of art from the famed illustrator of the book; and a limited edition Taschen book containing the rare Spiderman comic episodes from 1962-1964.

Montblanc's High Artistry A Tribute to the Great Wall Limited Edition 333 Fountain Pen will be paired with a rare, signed copy of a significant book about Confucius, The Wisdom of Confucius written by a Chinese inventor, linguist, philosopher and novelist Lin Yutang, the same author who wrote The Importance of Living, presenting some wisdom from classic Chinese philosophy of life and providing tips and playful reminders about how to find happiness in the simplicity. 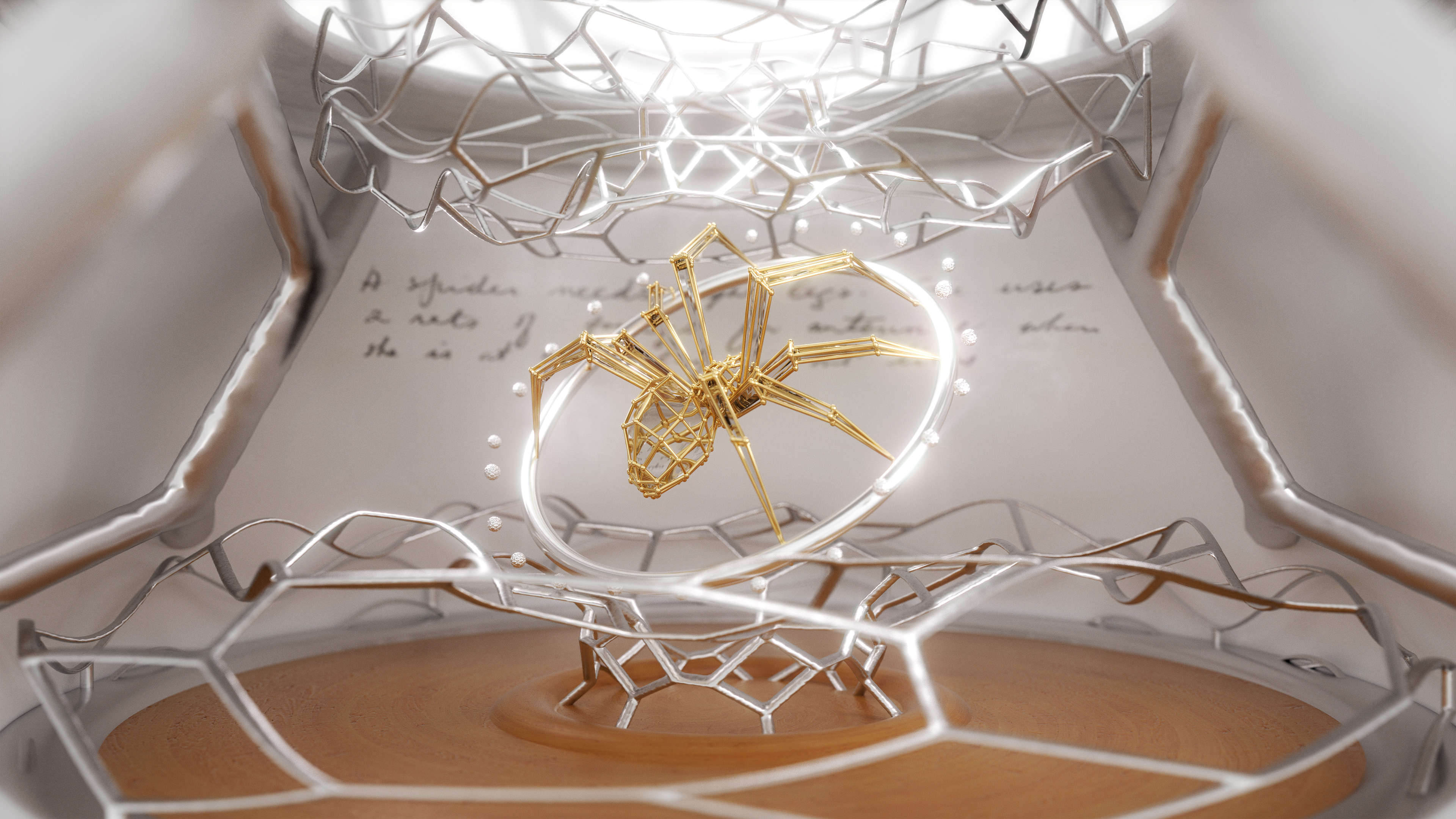 Spider Metamorphosis 88, Still by Can Büyükberber

In his new collection, with its spider-inspired limited edition, a slow, patient process of writing is depicted in Büyükberber's Spider Metamorphosis 88, and represented by the spider symbol, a symbol that also inspired The Spider Metamorphosis Limited Edition 88 Rouge et Noir pen, which celebrates creative writing through spider imagery and its references, which dates back to Ancient Greece.

As an ancient symbol, spiders are often associated with patience, creativity, and artistry. As weaving is for spiders, as a way of design in creating their lives & homes, writing is for authors. Through writing, authors weave their dreams, thoughts and their stories on paper. From Louise Bourgoise's iconic spider sculptures to Spider-man movies, we still see various contemporary reference of spider imagery in art, literature and cinema. Inspired by its symbolism and its references in literature, in the High Artistry Heritage Metamorphosis, Montblanc pays a tribute to Ovid’s epic poem in 15 books: Metamorphosis, specifically the Myth of Arachne which tells the story of a weaver, Arachne - meaning spider in Greek, and her transformation into a spider by Athena, the goddess of war & wisdom. The writing on the wall in Spider Metamorphosis 88 is from E. B. White’s handwritten notes on web weaving. 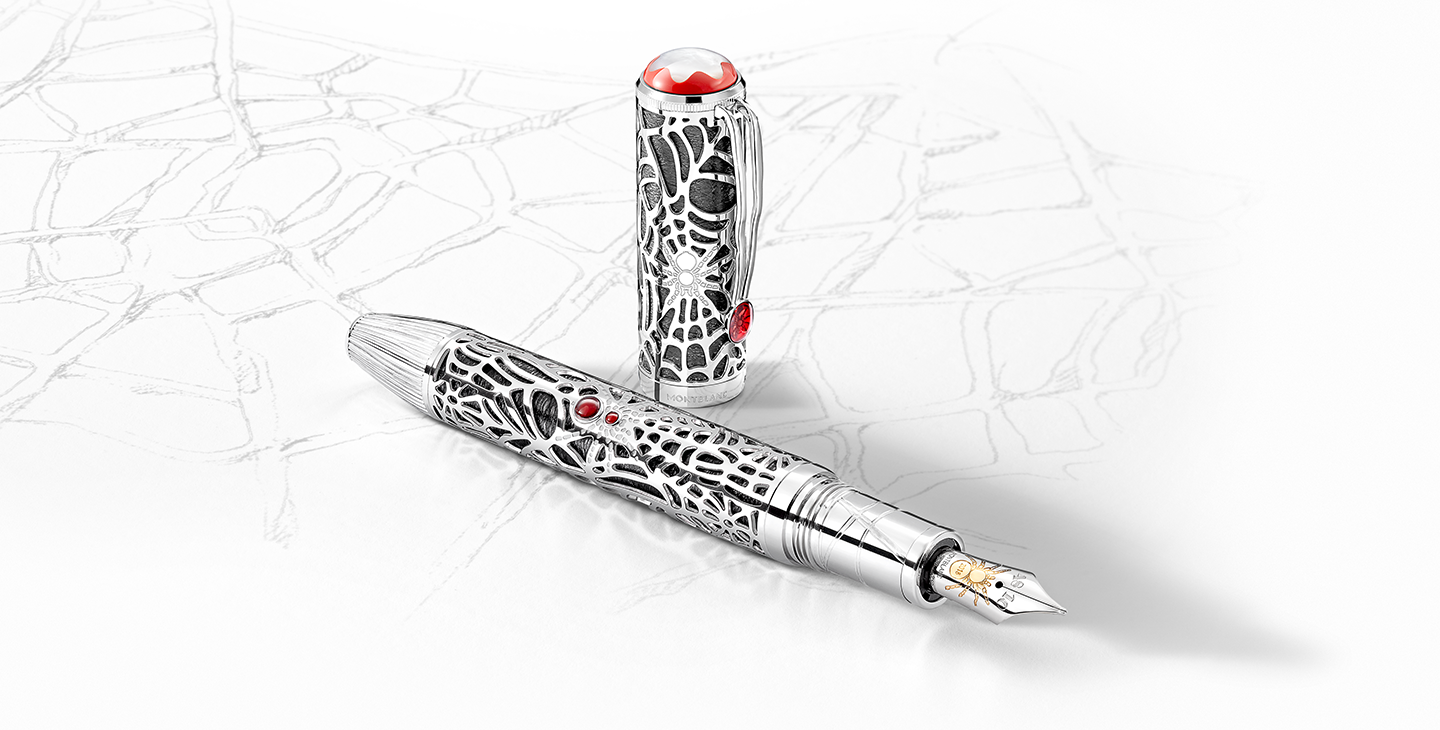 The mysterious outlook of the spider symbol and its fine details are skillfully crafted into the Au 750 solid white gold skeleton overlay on Limited Edition 88. The two red garnet cabochons composes the head and the body of the spider imagery, with its legs extending out into the web.

For the upcoming auction, the NFT of Can Büyükberber’s first edition Spider Metamorphosis 88 will be paired with Montblanc’s The High Artistry Heritage Metamorphosis Limited Edition, a rare signed first edition copy of Charlotte’s Web by E.B. White, an original illustration by EB White’s lifelong illustrator Garth Williams, and a physical print of the artwork signed by Büyükberber. 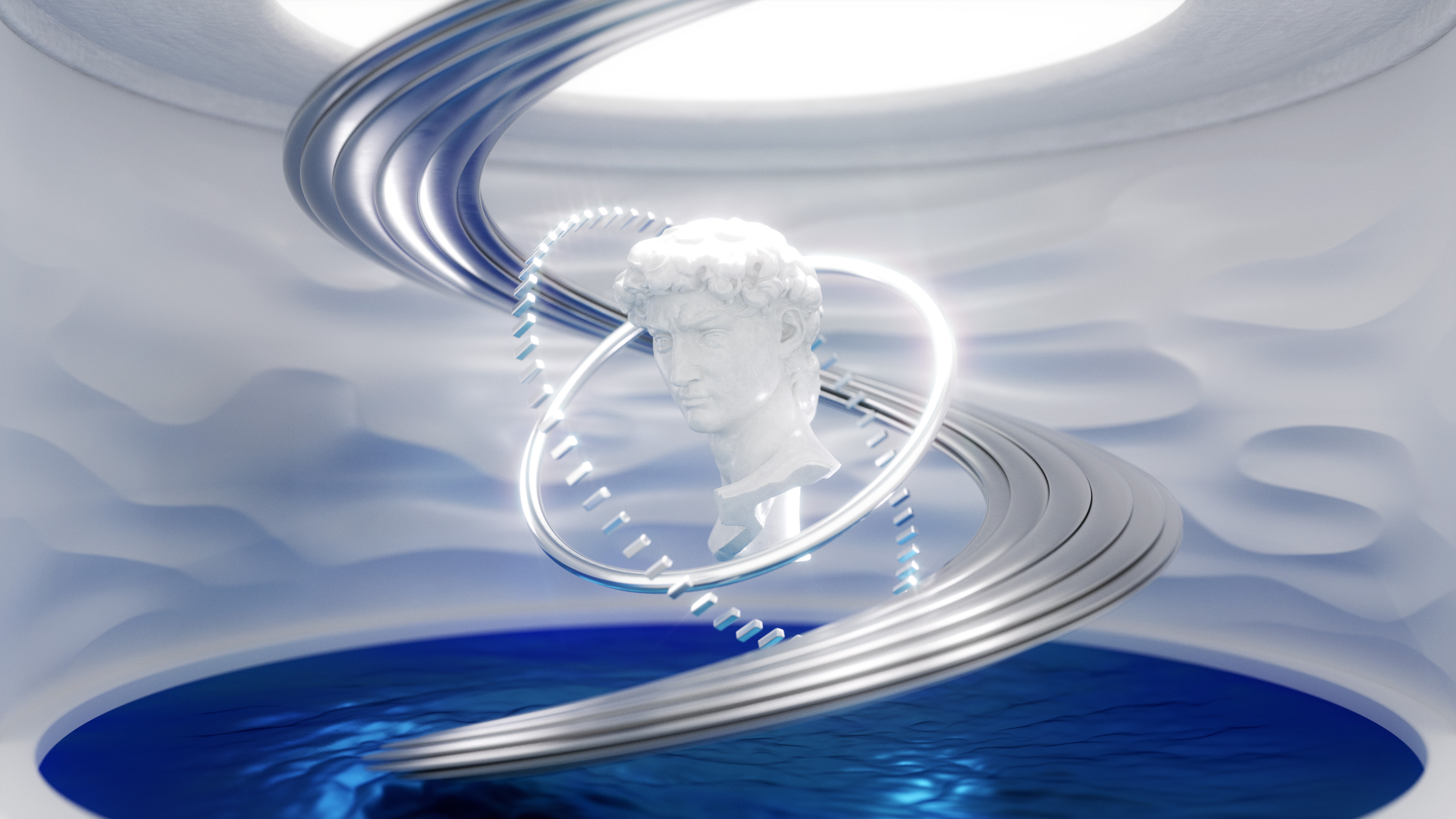 Michelangelo 96, Still by Can Büyükberber

One of the greatest artists of all time Michelangelo has been a great source of inspiration for many artists for more than 500 years, through the legacy of his masterpieces in architecture, sculpture and painting. Creating the Renaissance ideal of perfect humanity in huge scales, the commission of the David for the cathedral of Florence, the beauty of the frescoes on the ceiling of the Sistine Chapel are the ABC of the Western art and some of his best known masterpieces. Though his masterpieces in poetry were lesser-known to the public, poetry was one of the essential element of Michelangelo's carrer. One of his love poems, the emotional love sonnet number 96 served as the source of inspiration for the limitation to only 96 pieces in Montblanc's Michelangelo Master of Marble Homage Limited Edition 96 Fountain Pen. With the same edition size Can Büyükberber's Michelangelo 96 is an homage to the legacy and the eternal inspiration of Michelangelo's works. A twisted form circling around David's head associates with Michelangelo's twisted sculpture. The form emerging from a sea-like water body, loops in a neverending cycle as the work unfolds, highlighting the eternal inspiration coming from Michelangelo's technical and creative mastery. 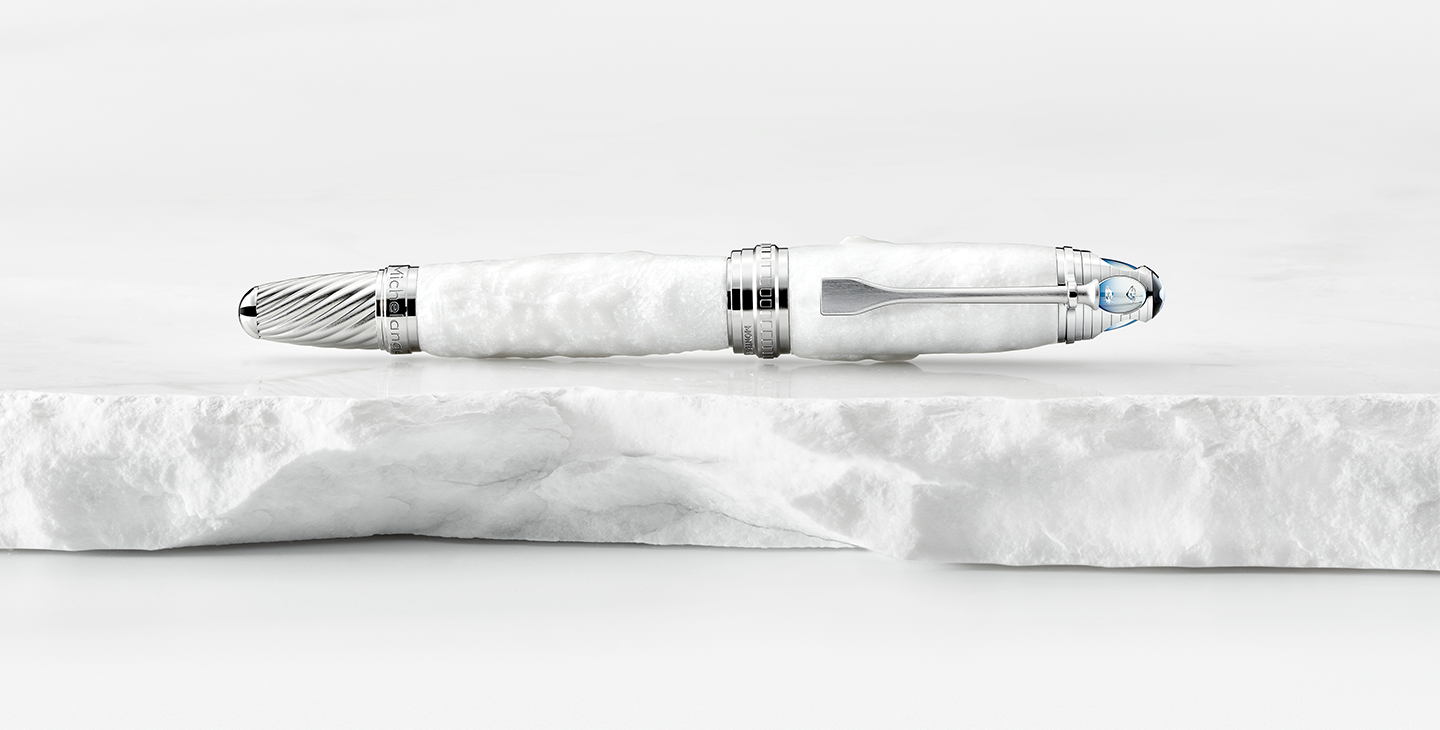 Master of Marble Homage Limited Edition 96 Fountain Pen is the micro approach to the world of Michelangelo, representing some of the essential components of his art. The overall design is inspired by the iconic David carved in beautiful marble extracted from the Carrara quarries in Tuscany. The cap top also draws inspiration from St. Peter’s Basilica in Vatican City, designed by Michelangelo, one of the most renowned architectural Renaisance masterpieces. The clip of the pen also has the shape of a chisel, one of working tools used for carving marble. 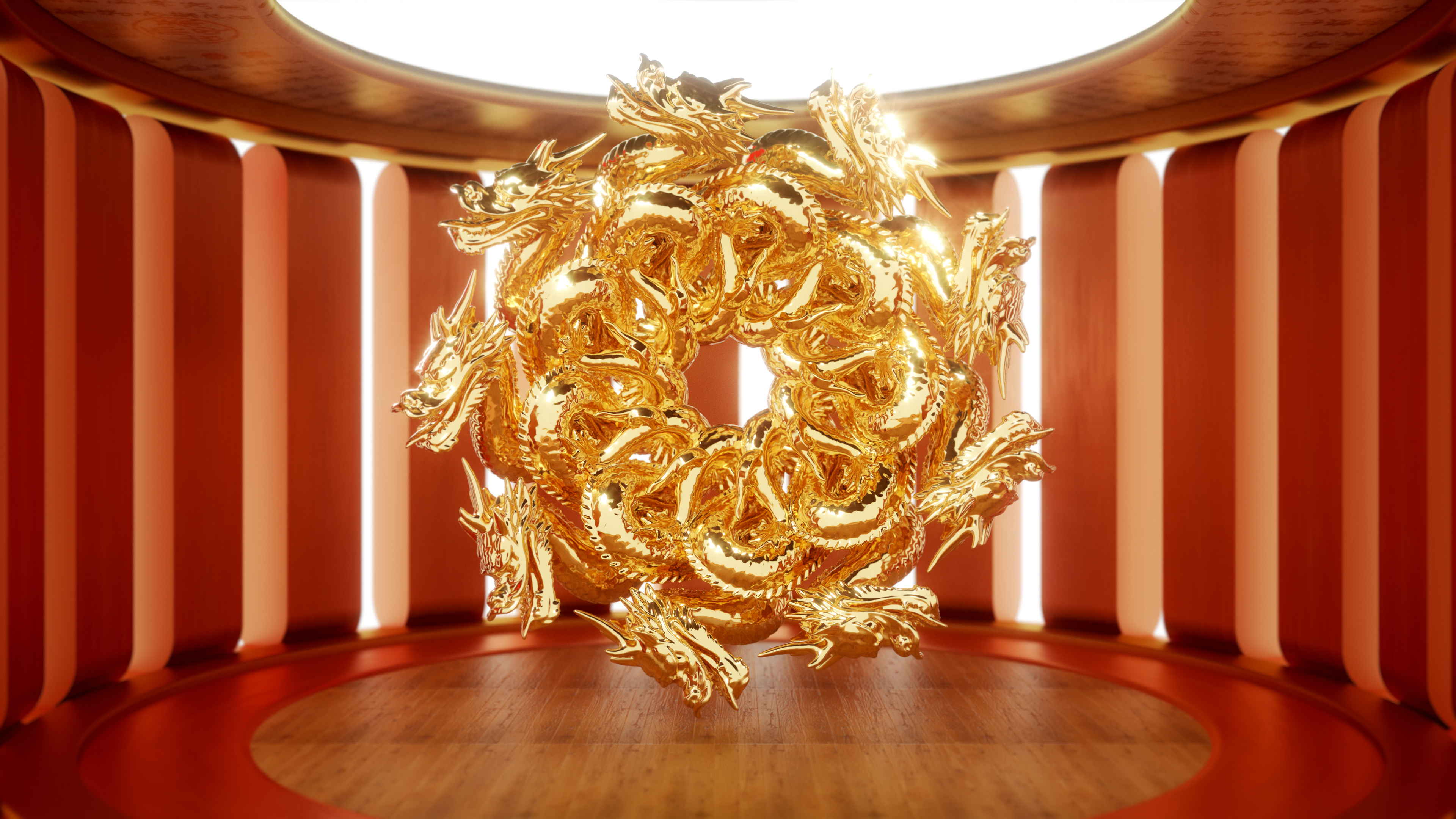 A Tribute to the Great Wall of China

One of the most recognizable symbol of China, the Great Wall was originally conceived of by the Emperor Qin Shi, more than 2,000 years ago. One of the world's largest military defense structures, the strategic construction resembles a twisting dragon, winding over ridges, hills and steppes. Great Wall of China 333, also inspired by the Montblanc High Artistry A Tribute to the Great Wall Limited Edition 333 Fountain Pen, pays an homage to this fascinating man-made monument.

It also pays homage to Ancient Chinese myths. Emblazoned in red - a popular colour in Chinese culture symbolizing fire, and referring to good luck, vitality and happiness - and yellow representing royalty and power, these two colours are dominant in Great Wall 333, captivating the viewer with nine entangled golden dragons looping at the center of the room. In Mandarin Chinese the number 9 is pronounced as "jiu" which also means "long-lasting" and the number is also strongly associated with the Chinese dragon, a symbol of magic and power. The work was also inspired from a handscroll painting Nine Dragons, created by Chinese artist Chen Rong in 1244.

"The pen also pays homage to the Forbidden City. Enclosed by the mighty wall, this geometric complex of palaces, pavilions and halls was a representation of the cosmic order, complete with glazed yellow curving roofs, bronze guardian lions, the winding Gold Water River and four entry gates. The pen incorporates the symbolic colors red and yellow in a multilayer effect created by a deep red translucent liquor underlay beneath an Au 750 solid gold skeleton overlay. Red represents fire, as well as happiness, beauty, vitality, good luck, success and good fortune. Yellow symbolizes royalty and is traditionally reserved for the emperor. In Can Büyükberber’s digital rendering, the dragons seem to be meandering through one of the rooms of the Forbidden City." - Russ Rosenzweig

Just as the Great Wall still winds protectively around China, the Au 750 solid gold overlay of the Montblanc Great Wall of China 333 pen coils dragon-like around the pen. It’s decorated with nine dragon motifs, incorporating the symbolic colors red and yellow in a multilayer effect created by a deep red translucent liquor underlay beneath an Au 750 solid gold skeleton overlay. The very special edition #1 of this work, which will be auctioned by the end of 2022, will include the actual pen itself, as well as a very rare and important first edition book about Confucius from 1943, The Wisdom of Confucius by Lin Yutang, signed by the author. The collector of the edition #1, will also receive a first edition copy of Nobel Prize winner Pearl S. Buck’s important work, Dragon Seed, signed by the author.