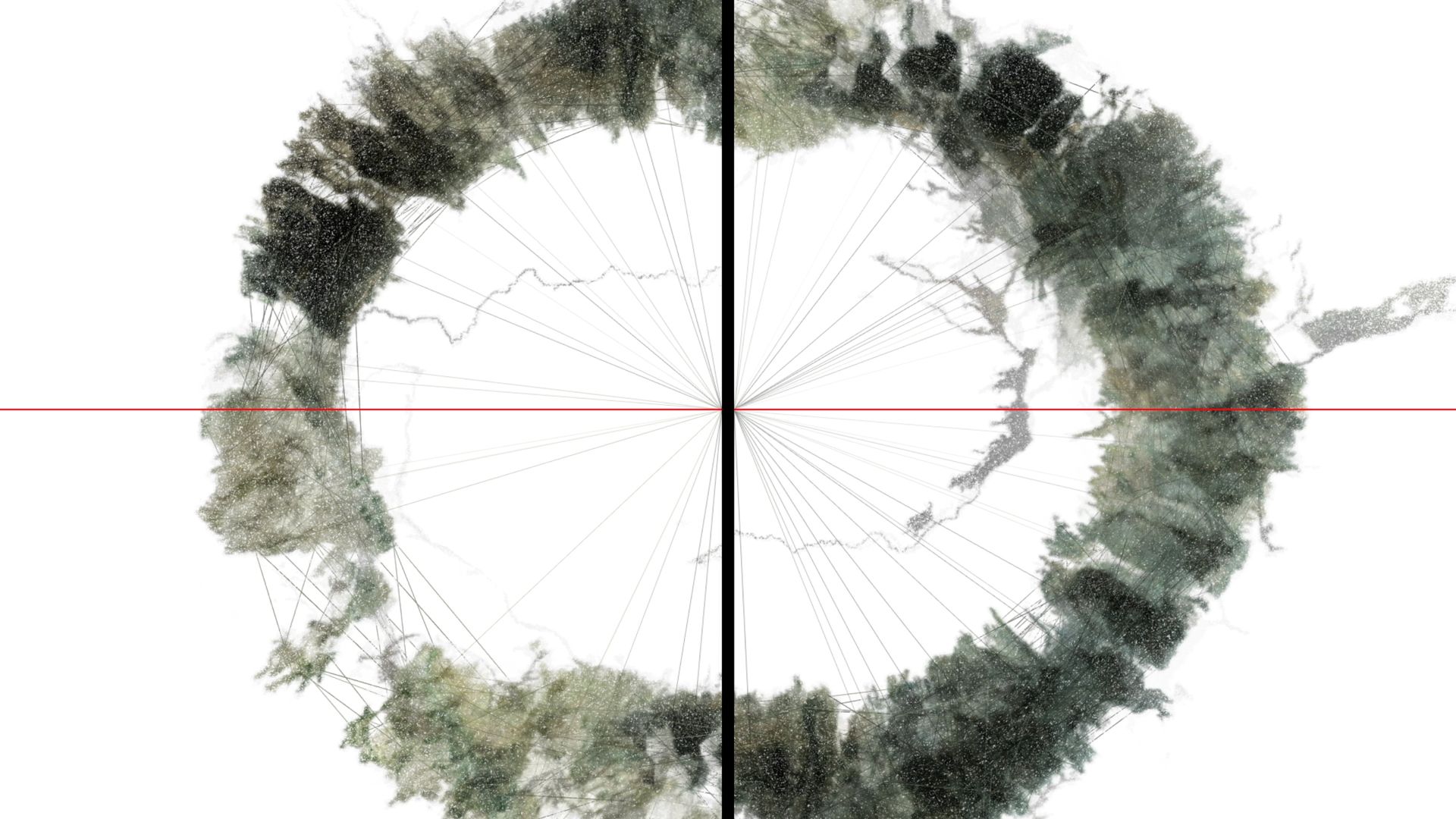 Ryoichi Kurokawa presents his first solo exhibition at the Espacio Fundación Telefónica in Lima, Peru bringing together both new and existing artworks by the renowned Japanese artist, who has been creating pioneering audiovisual pieces since the early 2000s. For the past 15 years, the artist has used his work to explore the unity of sound and image, creating ever-­shifting digital sculptures that provoke questions about the symbiosis between art, technology and nature.

The exhibition titled, Ordered Disorder draws inspiration from the concept of entropy, questioning and exploring the boundaries between order and disorder. Providing insight into the artist’s distinctive visual approach, as well as the thinking behind his work, the pieces on display illustrate how, with the help of technology, the human hand can reconstruct and reinterpret the chaotic materials of nature. Kurokawa draws a parallel between his work and the idea of a Japanese garden, both being comprised of elements that would descend into chaos without human intervention.

In his ongoing series of s​yn_mod ​pieces, Kurokawa works as a contemporary composer of sound and image, pairing pulses of noise with searing, strobe-­like glimpses of almost­ recognisable imagery. Although apparently chaotic, these works conceal complex underlying patterns and structures, eventually revealing themselves as carefully constructed explorations of sound and movement. For Sedition, Kurokawa launches the third digital edition syn_mod.3 for the exhibition, following the release of his works syn_mod.1 and syn_mod.2 in 2013 and 2014 respectively.

Also on display is his Golden Nica Award ­winning piece r​heo: 5 horizons, ​a time-­based sculptural experience that pairs field recordings with digitally­ produced imagery in a set of five audiovisual monoliths. Elsewhere in the exhibition, renature::bc­class #n​ asks intriguing questions about the role of nature versus technology, translating the exterior structures of insect and arachnid organisms into a series of particle sculptures; while s​centless challenges viewers to experience the city from an entirely different sensory perspective. Also being shown for the first time is c​onstrained surface,​a new piece commissioned by Espacio Fundación Telefónica Lima, which aims to provoke a purely synaesthetic response using sound and light.

Working with technologies that his artistic predecessors could only have dreamed of, Kurokawa's work suggests the possibility of an entirely new audiovisual language, that challenges the viewer with opposing notions of complexity and simplicity. Naut Humon, founder and artistic director of Recombinant Media Labs, has described Kurokawa as a new international benchmark in the field of digital art. “Kurokawa is an artist who can be regarded as an exemplary trendsetter in his field, or as an aesthetic­ defining trailblazer who is still pointing the way for others,” says Humon. “He is a genre ­transcending artist who continues to confound and transform stereotyped notions concerning the illustration of electronic image expression.”

Ordered Disorder opens 19 March until 14 June 2015 at the Espacio Fundación Telefónica in Lima, Peru. The syn_mod collection inclusive of the three audiovisual pieces is now available on Sedition in digital editions of 400 each.